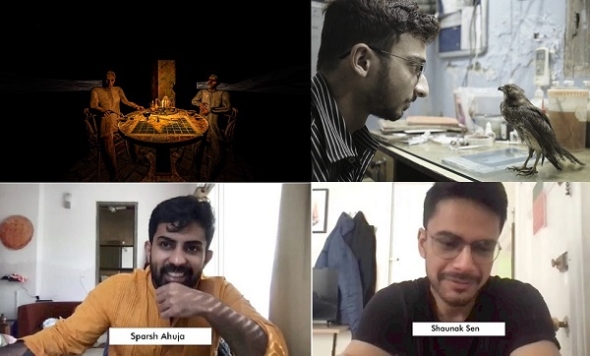 It was a busy seven days of world premieres and instead of traipsing through the snow in Park City, Utah, as acv did in 2019, we watched these from the UK…

INJURED birds and the work of two brothers and their cousin in helping these kites heal is set to become one of the hit global documentaries of the year.

The Indian made ‘All that Breathes’ won the World Documentary Grand Jury Prize at the Sundance Film Festival (January 20-30). The festival was held totally online this year, as was 2021. Those standing ovations and audience reactions were absent yet again.

We have a Zoom interview (to come) with director Shaunak Sen whose film will now get an extra boost following this award, especially if last year is anything to go by – ‘Writing with Fire’ also won the Sundance Grand Jury Prize in 2021. It’s a documentary about the first ever all-women’s Dalit media collective. This film has now also been shortlisted for an Oscar and has won 28 awards over the year. (See here for stories).

In ‘All That Breathes’, we follow the lives of brothers Nadeem and Saud and their younger cousin, Salik. The brothers run a small-scale traditional soap manufacturing business in Delhi but also have a significant side-line in bird rescue and specialise in reviving and ‘repairing’ injured or sick kites (or raptors as they are better known in North America). These birds of prey have been on the decline for many years and this is caused by environmental factors, as the polluted air around the city has got worse, these birds have lost their bearings and often collide with buildings and other structures.

The brothers are well-known locally and knowledge of their activity grows internationally, following an article in The New York Times which was published in February 2020, when Sen and his team were still filming. The documentary ends with Nadeem going to the US to receive further training as a ‘Kite doctor’.

Sen’s gentle, observational and poignant documentary goes right into the brothers’ home and factory and resuscitation area and chronicles their experiences, not just as rescuers of injured and sick birds, but also their wider story – as riots and protests engulfed Delhi neighbourhoods in 2018-9. There are mass protests against the Citizenship Bill (now enacted) and the possible creation of a National Register of citizens, along the lines of what was being done in Assam to identify illegal immigrants and designed to put further pressure on Muslim communities in India, claim the Government’s critics.

Sundance Juror Emilie Bujès said: “This poetic film delivers an urgent political story while constructing a singular and loving portrait of protagonists resisting seemingly inevitable ecological disaster – with humorous touches punctuated by unsentimental depiction of the animal kingdom. For maintaining its suspenseful tension when portraying the interior struggles of its characters and the contradictions in spirituality and materialism they confront, we present the World Cinema Grand Jury Prize to ‘All That Breathes’.”

Sen broke through internationally with his previous ‘Cities of Sleep’ – a near 90-minute documentary about the homeless and those who roam the city at night in Delhi. It showed at many film festivals around the world, including the UK Asian Film Festival – known at that time as the London Asian Film Festival in 2017. (Please see the link below for our review).

We will publish a full print review ‘All That Breathes‘ at the time of our Zoom interview drop (Please subscribe to our Youtube channel or connect with us on social media if you haven’t already – we will also use the #sundanceacv22).

The other Indian film that showcased globally at Sundance as a world premiere was ‘Child of Empire’.

This is a virtual reality and interactive animated film that allows people to experience the feelings and surroundings of two men as they experienced Partition in 1947 as seven-year-old boys.

The story is narrated during a chess game between the two men much later in life. Actors Adil Hussain and Salman Shahid play Hindu Ishar Das Arora and Muslim Iqbal-u-din, respectively.

We cover the origins of this film and the Sundance (online) reaction in another Zoom which we will put out after ‘All That Breathes‘.

‘Child of Empire’ director Australian-Indian Sparsh Ahuja lived and worked in Britain before becoming a filmmaker. His related Project Dastaan (Story) is known in the UK and he has presented parts of this work as part of South Asian Heritage Month here. Ahuja is currently working on a trio of related conventional shorts that can be screened for educational institutions, as well as film festivals. We talk more about this in our forthcoming Zoom – there is a very personal element to his film and we explore that in the Zoom.

As well as all this, www.asianculturevulture.com saw the new Bill Nighy starrer ‘Living based on a Akiro Kurosawa classic ‘Ikuru‘ (1952) with the story transposed to 1950s Britain; Emma Thompson going totally nude in London-set sex comedy, ‘Good Luck to You, Leo Grande’; Star Wars icon John Boyega in ‘892’ which is co-scripted by Young Vic Artistic Director Kwame Kwei-Armah; Finnish indie gem, ‘Girl Picture’; and US college race comedy ‘Emergency’. (See the links for these reviews below please).

🎥Boyega and the cast of ‘892’ picked up a Special Jury Award: Ensemble cast.

There was business done at Sundance with Searchlight Pictures picking up US rights for ‘Good Luck to You, Leo Grande’ for about £6m; while ‘Living’ has been acquired by Sony Pictures Classics for North America and some international territories for slightly less.

The biggest deal of this year was nabbed by the filmmakers behind ‘Cha Cha Real Smooth’ in which writer-director and lead Cooper Raiff secured a deal with Apple for around £13m. It also had the accolade of winning The Audience Award in the US Dramatic strand. The film is about Raiff’s early 20-something character being drawn to a 30-something single mother – who has an autistic daughter – played by Dakota Johnson. Raiff’s previous film, ‘Sh**house’ was a SXSW Festival Grand Jury prize-winner in 2020 and ‘Cha Cha Real Smooth’ was co-produced by Johnson, who also had another film, ‘Am I ok?’ screening at the Sundance this year and which she also co-produced and starred.

The other big Audience Award went to ‘Navalny’ – a fly-on-the-wall documentary about Russian opposition leader Alexei Navalny, made by Daniel Roher.