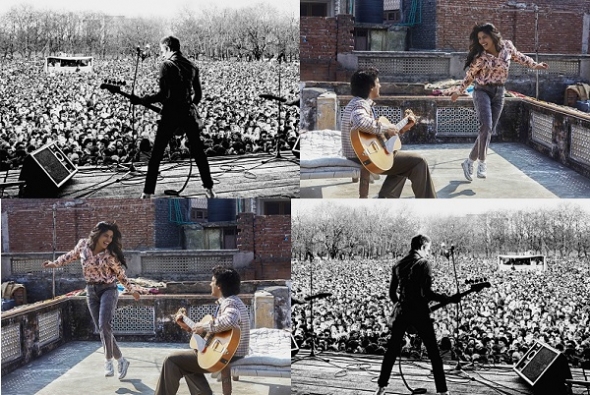 White Riot
Rubika Shah’s film is a tremendous documentary about the exploits of Rock against Racism (RAR) which countered rising right-wing sentiments among many young people in the 1970s in Britain.
Featuring interviews with all the main protagonists – including the men and women who created RAR and The Clash and Tom Robinson, it’s a lovingly crafted film about the backlash against the National Front party and racism during the late 1970s, when it looked like right-wing racism might make an electoral breakthrough and some musical figures – shockingly even David Bowie – expressed support for fascism and racism (read repatriation of non-white people from Britain). Well worth watching and ends with the sentiment – the battle is far from over.
More to follow on this soon.
Today: 6.15 Prince Charles Cinema, 7 Leicester Place WC2H 7BY
Tickets still available (at time of going to press).

The Sky is Pink

Directed by Shonali Bose and starring Farhan Akhtar and Priyanka Chopra, this is a near pitch perfect drama about love, loss and families tested time and time again.
It’s not as grim as that sounds – far from it – one of the most impressive things about Bose’s film is its tone.
We covered the film at its world premiere at the Toronto International Film Festival last month, click on the links and here to see.

The Sky is Pink

Privacy & Cookies: This site uses cookies. By continuing to use this website, you agree to their use.
To find out more, including how to control cookies, see here: Cookie Policy
← IFFI 50: Final day closing ceremony and film (November 28) – Stars talk films, fans and what they have learnt…Vijay Deverakondara, Rakul Preet Singh, Ilaiyaraaja, Farah Khan…(yesterday)
IFFI50 hears from big names as festival moves to its final day tomorrow (November 28) →