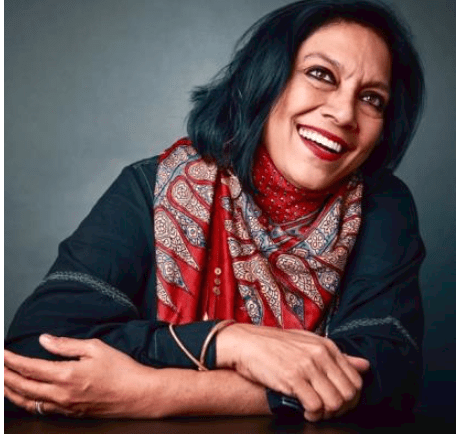 SHE WAS THE FIRST woman of Indian origin to win the Camera d’Or at the Cannes Film Festival in 1988 for ‘Salaam Bombay’.

She returned to Cannes this year as patron of Fabrique Cinéma by the Institut Français and spoke to a handful of journalists about why she was honoured to be selected and what winning the Camera d’Or meant to her.

“I came here with nothing, no entourage, no support and no Institut Français – and then having that one film (‘Salaam Bombay’) here and the reception being phenomenal.

“We sold it around the whole world in one night – it was the first Indian film to have got commercial distribution in every country in the world which has not happened before. It was in Hindi, in the street language, it opened doors for me – for Hollywood (where she made both ‘Missippi Masala’ and ‘The Namesake‘.

One of the role’s of the patrons is to encourage and advise the selected filmmakers the Institut has brought to Cannes.

“The key thing is that I stuck to my own stories that I wanted to tell – if I had accepted every offer that had come my way, I wouldn’t be sitting here today, I would be just any director – the key thing is to preserve your voice and your heart – that is why I have come back, as the patron,” Nair told www.asianculturevulture.com

She said it was important for young filmmakers to have a sense of themselves and be clear about who they were and why they wanted to make films.

“My main advice is to arm yourself with knowledge of the craft, but protect your own instincts and protect your vision and that is what makes you distinctive and believe that where you come from matters – your own language, your own poetry and your own struggle matters, and not simply to think we are any lesser because we have not seen ourselves on screen.

“It is our work, our duty to put this stuff up on screen because if you make it truthfully and with great panache, and great vision and ideas, then your own local stories actually become universal stories, that is what I’ve done in a couple of movies I’ve made and that is what I seek to remind myself because when you are starting out – you are the only filmmaker from Tunisia, the only filmmaker from Burkino Faso, you don’t even have any role models in your own country.”

With the Institut selecting filmmakers from a wide variety of countries for further development and support, there was a chance that these filmmakers would return home and mentor others and the knowledge tree would expand. From the Asia section, there were three films this year, one from India, one from Bangladesh and one from Indonesia – for the first time.

“It’s important the students know that they matter because we matter,” she reflected.

Her production house based in Uganda – Maisha has also been at the forefront of film education and encouraging others into film. It too runs a lab scheme and educates people about all aspects of film.

Nair’s first film for Disney ‘Queen of Katwe’ (2016) shot in Africa, contained 30 per cent of its alumni from Maisha and there are now some 700 young people who have passed out from Maisha since its creation 14 years ago.

Nair said she was inspired by Indian women filmmakers – and those in politics and an earlier generation who fought colonialism. She also noted how the Indian cinema scene was changing.

“It’s pretty vigorous, pretty amazing. The distribution has changed from big cinema halls to smaller multiplexes which has allowed for the independent voice and now streaming giants Netflix and others are making films – without censorship. Filmmakers are really drawn to that that because you cannot be censured by the government.

“The range and breath of the cinema I’ve seen is pretty muscular and I like it. Indian cinema has a huge audience and it can touch the diaspora as well.”

The Fabrique Cinéma selected 10 projects from different parts of the world and a mixture of documentaries, fiction, first and second films and was supported by Festival de Cannes and other media partners.

The Institut Français helps to promote French culture abroad and the Fabrique Cinéma is an initiative which sees selected filmmakers from around the world participate in the festival, and network – and seeks to help take the project from idea to production.

Privacy & Cookies: This site uses cookies. By continuing to use this website, you agree to their use.
To find out more, including how to control cookies, see here: Cookie Policy
← Darbar Music 2019 to end on high note with Pandit Budhaditya Mukherjee (sitar) and Pandit Shiv Kumar and son Rahul Sharma (santoor)
London Film Festival 2019: Greed – Red carpet glamour, Dinita Gohil, Steve Coogan, David Mitchell and others… (review of film as well) →