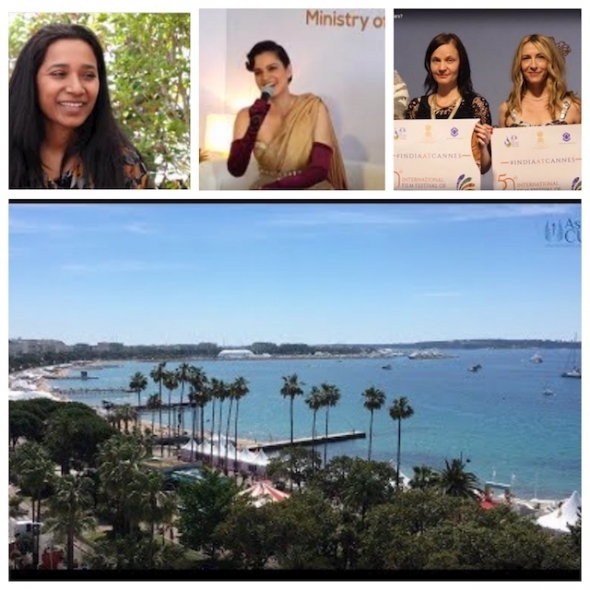 Why we made a couple of less time specific mini-featurettes…

EARLIER this year a lot of you will know we were at our 5th Cannes Film Festival, covering the world’s biggest and most glamorous film festival in video.

We’ve actually covered the festival from 2013 and Sailesh Ram, editor of www.asianculturevulture.com has attended 11 Cannes Film Festivals consecutively from 2009.

Later this year, we hope to make a special podcast with some visual clips and to be broadcast on our Youtube channel looking back at how it all started and where we’ve got to now, after five very special years.

This year we changed our coverage slightly and focused on themes and aspects of the festival which often get overlooked or aren’t properly understood.

Bollywood star Kangana Ranaut had some powerful things to say about equality on sets and delved into political ideas, showing perhaps how Indian liberalism can be tied to a particular form (of non threatening) nationalism. Interesting.

We also looked at the role of each country’s pavilions – in one sense, Cannes is a trade fair with countries selling themselves – both as destinations to make movies and inviting collaborations and partnerships with its own filmmakers. We spend time in both the UK and Indian pavilion, both arrange talks, networking sessions and there are opportunities to learn about filmmaking in that country.

#BrownpeopleCannes was a hashtag we used sporadically – the festival is multi-cultural and a truly global event. This year we made two films – one on what fellow British Asians do at the festival and another on the role of the pavilions. In case you think it’s full of the cynical and jaded, there are good stories there.

One of the most touching moments of this year came when Nadine Labaki, the president of the Un Certain Regard (the sidebar to main competition films), talked at Kering’s Women in Motion series, about how when she first visited the film festival (as an aspiring filmmaker from Lebanon, which had no history of filmmaking), she used to live outside Cannes, traipse in, queue and sometimes returned not having watched the film she wanted. She was anonymous, but simply, an ambitious and aspiring filmmaker with dreams.

Her first film, ‘Caramel’ had its world premiere at the Directors’ Fortnight in 2007 in Cannes (and is another official sidebar) and last year her latest film ‘Capernum’ premiered in the main competition section, won a Jury Prize and went onto make money everywhere and was critically acclaimed.

And so the student who loved films, and dreamed of making them and came to Cannes for inspiration, was now president of the jury of the Un Certain Regard section. What dreams are made of? It certainly spoke to the romantic in all of us.

Those of you who watched our coverage of Cannes will know where we are headed next… 😉 and part of putting those videos out now is to make sure we and you are ready for the next international video adventure… remember to follow the bird when it flies… and see you on the other side! 😉

The stars of the future and the role of pavilions in Cannes.

Tannishtha Chatterjee from an earlier batch