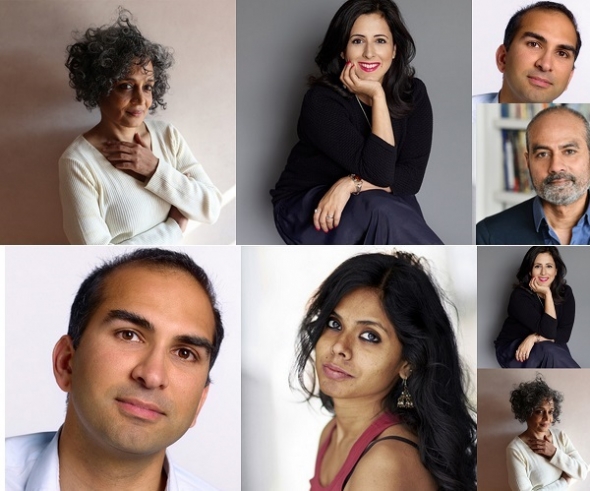 Who are the authors in Edinburgh?

IF YOU ARE LOOKING for books and authors to get inspired by – head to Edinburgh, where the Edinburgh International Book Festival has got under way today. (August 10-26).

There’s a lot going on, as always, but we’ve picked out some things that would definitely stimulate the asianculturevulture in you and we are starting off on talks from Monday (August 12). Some of these are very popular and already sold out but check on the day and at least you will know what’s happening…

Islam played a substantial role in reviving an interest the philosophy of the Greeks in the Middle Ages – note the role of Averroès and Avicenna and it continued to be at the forefont of modernity and progress in science, philosophy and associated areas. Venetia Porter, British Museum curator talks about the interconnectedness of ideas and faiths through textiles, ceramics, and manuscripts and other objects. Much of this is covered in a new book ‘The Islamic History: A History in Objects‘ and Porter goes through some of her favourites with Stuart Kelly.

The great German poet and playwright Goethe imagined a meeting of minds between East and West in ‘West-Eastern Divan’ (‘West–östlicher Divan’ ) and it is the 200th anniversary since the text emerged, floating the idea of creating a bridge in language and poetry between West and East.
Narguess Farzad, is an Iranian/Persian poet and academic and joins Robin Robertson, another poet and Jan Wagner, a Goethe expert and Barbara Schwepcke of Haus Publishing which is producing the work anew, along with other new poems, translations and essays.

Jokha Alharthi is a star – from Oman. She became the first author from Oman to have her work translated into English by Marilyn Booth and their effort, ‘Celestial bodies’ won the Booker International Prize in the translation category – just about the biggest international literary translation award going.
Listen to Alharthi talk about her novel and its themes of heartbreak, loss, and duty in the village of al-Awafi. The tenderness and subtlety of her work is what draws so many and a curtain on one part of the world is being drawn back like never before.

Increasingly, experts and researchers are finding links between domestic abuse and terrorism. It might seem odd, but the crisis of masculinity is something that is often deep and obscured and connected to modernity and changing gender roles in this century of ours. To throw further light on all this, Shiv Malik, author of ‘The Messenger’ about a journalist and a Jihadi and their true exchanges, discusses these themes with Ruth Wishart, author of ‘Home Grown’ which draws more direct dots between domestic violence and terrorism.

Arundhati Roy is among a handful of authors who can draw a crowd anywhere… Her two novels have been both hugely successful and she has been a constant critic of India’s lurch towards the Right and Hindu nationalism. Much of her work between novels has been political commentary and essays. What she will make of the latest political machinations in Kashmir will be interesting – ever more so in the company of someone who believes her nation needs to be free of its English masters. Of course, that is a one-sided way to see things when the UK is a partnership of equal nations…

Two debut authors who delve into family psyches and produce novels of flair, imagination and suspense. Claire Adams’ ‘Golden Child’ interrogates parenthood, when a child goes missing in Trinidad. Vikram Paralkar, medic and scientist investigates wounds and repairs, as a family lies on the operating table, both metaphorically and in a manner of speaking physically too, in ‘Night Theatre’.

Not in these parts (Scotland) since 2010, Suketu Mehta, New York University Associate Professor of Journalism, returns with his first work since, ‘Maximum City’ a hugely entertaining, insightful and influential book about Mumbai. This time he tackles migration and takes head on Western fears about further globalisation and modernity that rest within it. The world, especially the West needs to continue to embrace migration, not shun it, he argues.

The centenary anniversary the of Jallianwala Bagh mass killings remain with us and Anita Anand, broadcaster and author of ‘The Patient Assassin’ examines one man’s – almost quiet and mostly forgotten (here) – revenge. A book that has drawn many plaudits for not only its brisk and thriller-like style, but a reminder that the dark chapter of Jallianwala reverberated long after and ultimately, led the way to Independence.

Well-known and much respected BBC broadcaster George Alagiah has just written his first novel, ‘Burning Land’. Set in South Africa, where he reported for a time during the height of Apartheid and its brutal reign, Alagiah writes about a nation at war with itself in the aftermath. One of the country’s bright new hopes is murdered – two childhood friends decide enough is enough. Alagiah will talk to Allan Little, BBC correspondent.

📚 India after the elections – A year of Controversy, an University of Edinburgh event – panel Monday, August 26 3.15pm Garden Theatre

All across South Asia, the winds of change are blowing – Pakistan has voted in a charismatic one-time cricketing legend, Imran Khan. In neighbouring foe, India has delivered a stunning verdict on Narendra Modi and his BJP administration – more, more, more! Have we seen the first moves (in its changing the status of Kashmir) towards a less constitutional and less essentially democratic form of government or is India developing different ideas around freedom, and rejecting western notions of liberalism and political expression. In Bangladesh too, there is controversy and terror as intellectuals come under fire and more people want to support a tough and uncompromising government. The forces of populism are on the march taking the subcontinent on a journey but where will it end?? Writers Meena Kandasamy, Nitisha Kaul, and Talat Ahmed form a panel to debate.

Also appearing is Salman Rushdie on Monday at a sold out event (check returns on August 26) for A Search for Quixotic Love – his latest book, ‘Quichotte’ enjoys its worldwide launch at the festival. Reimagining and inspired by Cervantes’ ‘Don Quixote’, Rushdie transplants our hero to modern-day America, giving him a Chevy Chase, an imaginary son Sancho and a task to find the beautiful and the eternal, in a land where things are not all they seem.

Privacy & Cookies: This site uses cookies. By continuing to use this website, you agree to their use.
To find out more, including how to control cookies, see here: Cookie Policy
← Year in Review: Our highlights of 2019 by Momtaz Begum-Hossain, Suman Bhuchar and Sailesh Ram
Shobana Jeyasingh awarded a CBE – crowning 30 years in dance; other arts & media New Year’s honours recipients – Nadiya Hussain, Nishma Gosrani and Jasvir Kaur Rababan →