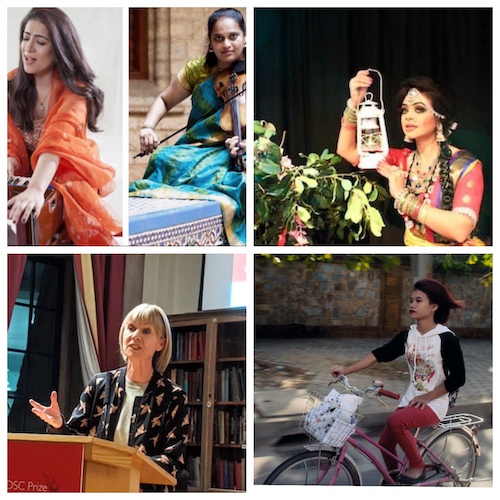 Bite-size takes on music coming up, a books prize shortlist announced in London and how stories are being told in novel ways…

Unnati hits Jazz notes in a first
TALENTED and versatile singer and musician Unnati Dasgupta debuts at the London Jazz Festival on Sunday (November 24).
She will be accompanied by violinist and South Indian Carnatic specialist Jyotsna Srikanth and Alex Wilson, a jazz pianist of English and African parentage, will join the two women.
This Indo- Jazz Double Bill, as it is described, also sees Ariel Cubria join on bass, Hanif Khan on tabla and Abhiram Sahathevan on mridangam.
Unnati – as she is known as a performer – has appeared at the main stage at Womad and has just produced her first solo album, ‘Indigo Soul’, will be touring with it in 2020.
She sings in a range of styles from Indian classical to contemporary pop and Jazz. Medical doctor Jyotsna Srikanth is also one of the forces behind the London International Arts Festival (LIAF) later this month – November 27-30 in Redbridge, East London. Originally primarily a musical affair, it offers a wider range of offerings today and still has something of a leaning towards Carnatic music, the tradition of music best known in the South of India. See below for more…
Jazz Listing: https://efglondonjazzfestival.org.uk/events/unnati-dasgupta-jyotsna-srikanth-featuring-alex-wilson LIAF 2019: http://www.dhruvarts.org

Folklore tale is adapted for modern age and has multi-cultural cast
DEVELOPED from an 18th-century Bengali ballad, Ahmed Kaysher and some of the same folks behind Saudha (Society of Poetry & Indian Music) come together now to further explore a particular type of musical theatre, popular in eastern India and Bangladesh.
Known as Palagaan, and sometimes described as folk opera and also reminiscent of another associated genre Jatrapala – much of the music and vocals have been devised by Chandra Chakraborty, an established Hindustani classical singer who is also behind a form of emerging Indian classical musical theatre.
This particular story, ‘Mohaur Pala – The Ballad of a riverine land’ sees a young girl of six-months (called Mohuar) being abducted by two-snake charmers who have fallen on hard times as famine grips Bengal.
The girl turns out to be talented dancer and saves the snake-charmers financially, but runs into family opposition when she falls in love with a local prince – the family just can’t let go of their main source of income.
“It’s about the commodification of women,” Kaysher told acv. The narration is in English and it’s a multi-cultural production with several parts being played by poets who first had links with Saudha. Among the cast are Sonia Sultana, award-winning singer, Jessy Barua, folk dancer Sohel Ahmed, and leading Tagore vocalist, Dr Imtiaz Ahmed, poet, Gaby Sunbuccetti and Kenyan social campaigner Juliet Makhapila.
This work is part of a festival run by Tower Hamlets Council in East London, Arts Council England, and Queen Mary University.
Listing: ‘Mohaur Pala – The Bale of a riverine land’
Saturday (November 23) 7.30-pm and Sunday (November 24) 3.30pm
https://www.eventbrite.co.uk/e/mohuar-pala-the-ballad-of-a-riverine-land-tickets-63770339803

Spotlight on great authors and books from South Asia
SIX BOOKS are vying for the $25,000 prize that is the DSC Prize for South Asian Literature.
Now in its 9th year, the winner is set to be announced at the IME Nepal Literature Festival in Pokhara in the Himalayan country on December 16.
The six books are ‘Half the Night is Gone’ by Amitabha Bagchi (Juggernaut Books, India); ’99 Nights in Logar’ by Jamil Jan Kochai (Bloomsbury Circus, Bloomsbury, India and UK and Viking, Penguin Random House US); ‘The Far Field’ Mahuri Vijay (Grove Press, Grove Atlantic US); ‘There’s Gunpowder in the Air’ – by Manoranjan Byapari and translated from the Bengali by Arunava Sinha); ‘The City and the Sea’ Raj Kamal Jha (Hamish Hamilton, Penguind, Random House India); and ‘The Empty Room’ – Sadia Abbas, (Zubaari Publishers, India).
The announcement at the Shaw Library inside the London School of Economics and Political Science earlier this month saw Kate Mosse OBE, novelist and a co-founder of the Women’s Prize for Fiction deliver a keynote address on the importance of prizes and encouraging (new) voices from far afield.
Among the others who spoke were Surina Narula MBE, co-founder of the prize with her husband, Manhad, Mukulika Banerjee, director of the LSE South Asia Centre and judges Harish Trivedi, chair of the jury, and a former professor of English at the University of Delhi and Jeremy Tambling, former Professor of Literature at University of Manchester. Both have written extensively on post-colonial literature and are joined by other judges.
For more please see: http://www.dscprize.com

A corporate story but not what you think…

MORE AND MORE companies are making their own films and telling their own stories…
ACV was invited recently to view ‘Tomorrow and the Butterfly’.
In Italian and English, it tells the story of the Davines Group – initially a Ma and Pop operation that devised hair care products from natural substances (mainly from a type of olive grown locally) in their garage, but have blossomed to become a global force in the hair care and beauty industry. That isn’t the story though in this film.
It’s very much about the here and now and directed by the award-winning Alessandro Soetje, it tells six short documentary style pieces about sustainability, beauty, tolerance and diversity, in the company’s own words.
It travels the world to various outposts of The Davines Group – and perhaps the most affecting section is one shot in Cambodia which shows how the company helped to set up a hair and beauty saloon, which also trains vulnerable young adults and those who have faced sexual exploitation.
You might see such works as no more than elaborate and expensive PR exercises, but chairman Davide Bollati has a real philosophy and his commitment to creating a better world is borne out by his family and his company’s commitment to a sustainable world and the environment around them. In their base in northern Italy, they have created a village of simplicity and harmony and plan to plant trees all the way along the road leading to their offices. Of course the group has the money to do it – and if more acted like this, we could perhaps face up to the challenges of the future of our environment with more optimism. A lot of companies are talking the talk but are they actually walking the walk?
For more please see: www.davines.com