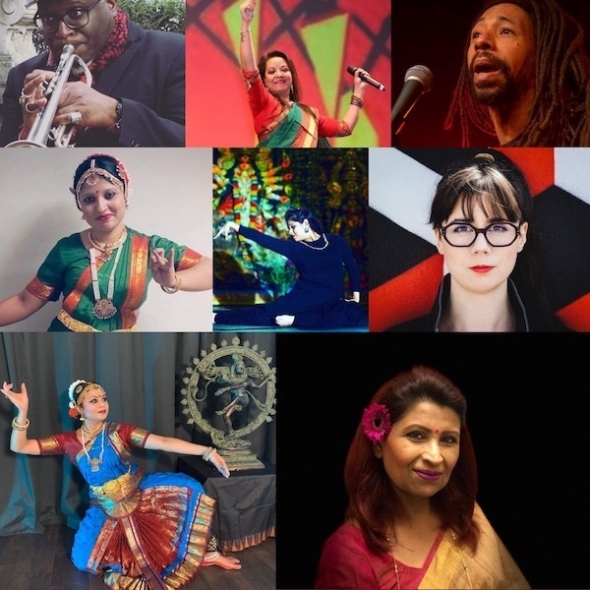 POETS, singers, spoken word artists and other performers have joined together to support an event billed as ‘Verses and Voices Against Violence and War’.

It will take place at Rich Mix in London on Sunday (April 24) and is a free event organised by Saudha, Society of Poetry and Indian Music with the support of UK-based South American literary platform La Ninfa Eco. The event coincides with other similar gatherings in Oxford, Birmingham, Leeds, Southampton and other big cities.

This event, ‘Verses and Voices Against Violence and War’ will also raise awareness of racism, violence and brutality which often feed into conflict and war.

Ahmed Kaysher, co-founder and director of Saudha is himself a poet, dramatist and folk singer, and told www.asianculturevulture.com why he helped bring more than 42 artists (in all) together to raise awareness and create understanding between communities through art – something he and Saudha have always been very passionate about from its inception.

Drawing on the terrible events in Ukraine, Kaysher said artists tend to feel conflict intensely – even though they may not be directly involved – and it often disturbs their sense of wellbeing and encourages them to create.

He told acv: “They feel anguish. This is very much about what kind of impact the war is putting on artists’ minds and how artists are reacting to it.”

Originally from Bangladesh, he knows about the trauma and deep social scars of war.

As a child, he heard stories of how the country achieved its independence just over 50 years ago after a brutal and punishing conflict.

He sees horrible parallels between what is going on in Ukraine, communities once close and similar in outlook have been riven by division, argument and conflicts over identity, faith, language and nationhood.

“I went through so many experiences of writing and war, because I’m from Bangladesh, and unfortunately, I knew what war means to the Bangladeshi people.”

He sees art as a way of combatting ignorance, furthering understanding and creating empathy.

“Wherever we go, we are connecting with some artists from the local communities, as well as artists joining from London as well,” he told acv as the number of performers has increased as news of the event spread.

Kaysher said it will be an immersive experience and many who support and follow Saudha were backing this initiative too.

Last year, Saudha marked the centenary of two epic and epoch defining works – one from the West, in TS Eliot’s ‘The Wasteland’ and Kazi Nazrul Islam’s ‘Bidrohi’ (‘The Rebel’) which was penned in Bengali, as India strived for independence from the British Raj. (See here for this story.)

Saudha also helps to organise the now annual Jibanananda Festival, which celebrates the Bengali poet Jibanananda Das (1899-1954), a writer widely admired for his sense of melancholy and delicacy of temperament and who was also much influenced by both Western poetry and Indian great Rabindranath Tagore. (See here for the story )

Privacy & Cookies: This site uses cookies. By continuing to use this website, you agree to their use.
To find out more, including how to control cookies, see here: Cookie Policy
← Women in The Arts Festival – music and debate with Sufi and Bhakti centre stage now
‘Teefa in Trouble’ – Star Ali Zafar aims to put Pakistani cinema on global map and get beyond personal controversy →