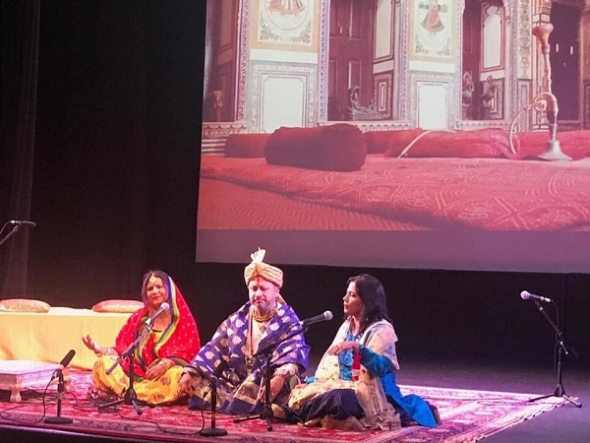 CLASSICAL Indian musical theatre is still an evolving form in the UK and the latest production, ‘Saraswati: Forgotten Daughter of Taansen’, shows signs of further progress.

Mounted by Indian classical musical outfit, Kalakar, it will take place on Sunday (September 8) at The Bhavan Centre (an Indian cultural hub) in London.

Chakraborty, who has been busy rehearing with her 20-strong team to prepare for this enchanting dance drama complete with Mughal costumes, kathak and sufi dances and classical music, told www.asianculturevulture.com that she wanted to highlight the contribution of Saraswati, daughter of Tansen (as his name is more commonly spelt).

Tansen had four sons, who used to perform but his daughter did not really perform outside the home. It is said she played the veena (a plucked string instrument part of the chordophone family).

Tansen came to the attention of Emperor Akbar and was invited to join his court where the Emperor gave him the epithet of “Mian” meaning a “learned man”. There are several legends about the man and one of them is the basis of this drama.

As the story goes – many courtiers were jealous of Emperor Akbar’s patronage of Tansen and conspired to find ways of getting rid of him.

“By an evil conspiracy, Tansen was forced to sing a classical Raga called ‘Deepak‘. History says ‘Deepak’ is such a raga, which if performed with pure sincerity could cause fire and the person who is singing it, could die. So, when Tansen was forced to sing this raga and everything caught fire, Saraswati came in the scene, performed another Raga called ‘Megh’ to bring down rain on the earth, thus saved Tansen’s life,” explained Chakraborty.

This story is well known, but it has not been given such a musical treatment until now, although the character of Tansen has figured in Indian popular culture.

“I have done thorough research on Taansen and his background and written the script but the songs are pure classical music. Some of these were composed by Taansen himself and his sons. Some are well known, traditional compositions in Hindustani Classical Music,” Chakraborty added.

‘Saraswati: Forgotten Daughter of Taansen’ is performed as a musical in Hindi/Urdu and English.

Taansen is played by her husband, Dr Siddhartha Kargupta, who is a computer scientist and a musicologist, while Chakraborty plays the part of Saraswati.

Chakraborty – who was also shortlisted for the Eastern Eye Award for Traditional music in 2019 – studied khyal and thumri at the Sangeet Research Academy in Kolkata, India under the guidance of late Maestro Arkut Kanan (vocalist in the khyal style) and his wife, the classical music vocalist, Malabika Kanan of Kirana Gharana (a school of music).

Later, Chakraborty learnt semi-classical singing in the Benaras School under the guidance of Padma Bibhushan Girija Devi, and was a Gold Medallist from All India Radio and a National Scholar of Music and Dance.

She moved to Johannesburg in South Africa to teach Indian music at the Indian Consulate and then began performing and teaching across that country.

She has been living and working in the UK since 2000 and in 2012 co-founded Saudha – the Society of Poetry and Indian music – along with Ahmed Kaysher, a poet and friend. (ACV has covered their work, see link below please).

She has since set up Kalakar, a London based musical theatre company and as its artistic director is committed to promote the work and lives of famous Indian classical music icons as a way of bringing their work to new audiences.

Their first production was ‘Begum Akhtar: The Musical’ which took place at The Bhavan in March and was a huge success.

As a result, the Bhavan has invited the company to partner and present more work in the same vein, and Chakraborty wants everyone to know more about the “significant contribution of Saraswati to Indian classical music as it was she who saved her father. Without Taansen, we really don’t know what would have happened to our Indian Classical Music in the years that followed”.

Of course, it goes without saying that this musical will entertain the audience with some brilliant vocal, dance and acting performances!

Links
http://www.swarmanttra.com/blog/raga_deepak_indian_musician_tansen/ (story of the legend)

Privacy & Cookies: This site uses cookies. By continuing to use this website, you agree to their use.
To find out more, including how to control cookies, see here: Cookie Policy
← Alchemy 2018: ‘Echoes and I imagine’ – (preview) dancer Aakash Odedra presents collaborative work with Kathak icon Aditi Mangaldas and Brit spoken word star Sabrina Mahfouz in pieces exploring memory, migration, identity and belonging…
British Asian Festival (May 4-6) – Comedy, spoken word, Asian writers and a Sridevi tribute →