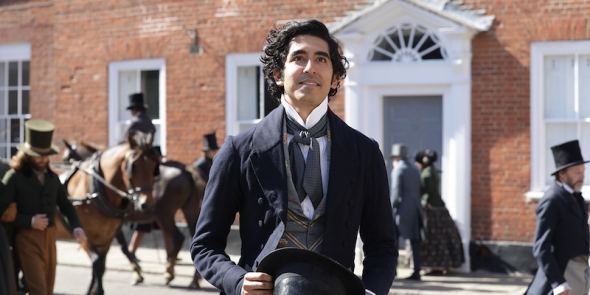 English Classic gets wonderful treatment and speaks to, and of a heart, we should listen to…

THERE is still no trailer for this film – so it seems like you are part of a secret society primed to spread the word. (Also this is the only picture above that has been released to the press here).

As little as five years ago, this might have been unthinkable. Today, this manner of casting is riding a wave and one that we hope will come to represent a watershed moment for feature films generally (and part of the reason why we are here).

Director Armando Iannucci told us why he wanted Dev and Dev himself tells it like it was… (see clip below) – and the film bears out exactly why he selected. Iannucci said he had no Plan B, if Patel had not accepted.

There is a glorious embrace of warmth, affection and intrepid spirit contained within ‘The Personal History of David Copperfield’ and no doubt Charles Dickens, the author of ‘David Copperfield’ would heartily approve.

What director Iannucci has done is bottle a sort of Englishness and Britishness that is funny, loving and compassionate and let it spill all over the celluloid.

The effect is wondrous and you understand almost instinctively why Patel was the right man for this part.

In some ways, it’s a glorious romp – an ode to a Victorian England we often don’t inhabit. Yes, this is a costume drama but Iannucci, well aware of the soft political undertones such a genre exhibits, has skilfully avoided it.

He said as much in a post Q&A screening here yesterday (September 6) – he didn’t want to do just any old costume drama and replicate the same tropes – ie fill the screen with loads of people who look and sound mostly the same. There is plenty of diversity throughout this film and it is to be celebrated.

As a second generation immigrant whose Italian family (Iannucci) settled in Glasgow, you can the see the gestures – large and small – that make this film a celebration of a particular kind of Englishness and Britishness – liberal at heart, friendly, inquisitive, curious, intelligent, compassionate and optimistic. This isn’t always the common idea of Britishness, but it is what both Dickens and our David Copperfield are about and when you see a film far from home, it makes you more oddly emotional than you might otherwise be.

Okay, that aside and acknowledging that this is a moment in British filmmaking – to have a non-white lead in a quintessentially British character role – what about the film itself, the story, the acting, all that…?

The story – well you know the story? It seems strange that Dickens does not enjoy quite the same level of veneration and interest Shakespeare does… why? That is for another day and another film.

This is a grand coming of age film, from birth, not quite through till death, but to adulthood, marriage and children.

What Dickens did is to show the complete life: the ups and downs and how a certain fortitude of character, values and beliefs can carry you to a decent destination in life.

Iannucci obviously compresses Dicken’s novel, but with a cast as strong as this he doesn’t disappoint – Tilda Swinton (Betsy Trotwood), Peter Capaldi (Mr Micwaber), Hugh Laurie (Mr Dick), Ben Whishaw (Uriah Heap), all shine and some of the relatively lesser known actors who have significant parts in this also bring their burgeoning talent to the screen.

Patel dissembles masterfully – socially gauche and naive at times – you think such a part was invented for him – his own infectious trademark enthusiasm is Copperfield’s.

This film has a joyous heart and even though there is darkness and destitution (it is after all still the age of child labour and poor working conditions and Copperfield is impoverished at certain times himself), Iannucci has stayed faithful to Dicken’s overall sentiments we believe – and it is a reminder that kindness, compassion, sincerity and doing right by others, is a powerful guide for the life well lived.