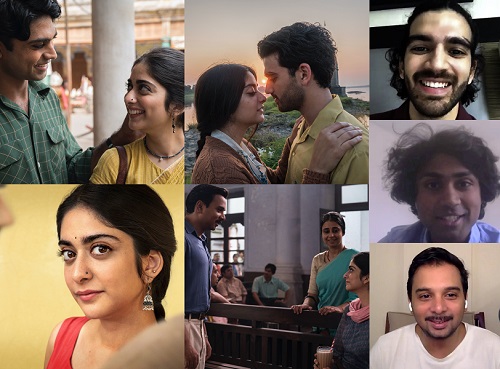 Who do you think Lata should marry? Or who do you think she will end up with? We talked to the actors who play her possible matches, ahead of the final instalments of the series on BBC TV…*

DIRECTOR Mira Nair’s epic six-part TV rendering of Vikram Seth’s celebrated novel of the same title ends on BBC One on Monday (August 24) with the central question of ‘A Suitable Boy’ determined.

But just who is in the running and what are the options for ‘Lata’ (Tanya Maniktala), the heroine of both the book and the TV series ahead of the last two episodes dropping on BBC TV on Sunday (23) and Monday (24).

Her mother, Mrs Rupa Mehra (Mahira Kakkar), is on the hunt for a suitable boy and three men are in the running. Ma has her own favourite, but Lata insists she must make the decision for herself.

As you may know www.asianculturevulture.com got a chance to quiz ‘Haresh Khanna’, played by Namit Das, ‘Amit Chatterji’, portrayed by Mikhail Sen and ‘Kabir Durrani’, Danesh Razvi in his first high-profile project, about their roles and their chemistry with Tanya Maniktala who plays Lata. You will be able to see this video very shortly on our Youtube channel – do subscribe and click 🔔, if you haven’t, so you won’t miss it!

Who will she choose? Here’s a little guide to her dilemmas…

Haresh Khanna (Namit Das pictured)
BBC character profile: Self-starter Haresh studied shoe manufacture in England and now has two goals in his sights: a top career in the footwear industry and a match with Lata. Self-assured and a bit of a flashy dresser, not everyone in the family is hopeful for his success.
ACV: Paan-chewing, ambitious, studious Haresh is straight as a bat when it comes to Lata. He wants her hand in marriage and is not perturbed when it is clear some parts of the Mehra family – Lata’s older brother (Arun/Vivek Gomber) is positively against such a match. Haresh, he believes, is beneath them – English is not his first language and he has no family lineage of which to boast. There is a wonderful scene in episode 4 when Arun waxes lyrical about London and the West End, only to be upended when Haresh asks him when did he last visit…Arun has never been to England, but the understated, quiet demeanour of Haresh means he lets the moment go and leaves Arun to a minor choke. Delicious. Hear how closely Namit Das identifies to Haresh Khanna…

Kabir Durrani (Danesh Razvi pictured)
BBC character profile: Kabir is a handsome student and the star cricket player of Brahmpur University. After a chance meeting in a library, Kabir and Lata begin a romance, despite the religious barriers they face.
ACV: Passionate, smart, intense and romantic, Kabir has much going for him but as the series progresses, we see a less attractive side. However, he remains a dashing, enigmatic figure, full of romantic possibilities. He still wants Lata, but the religious barrier (he is Muslim and she is Hindu) and with everyone and everything seemingly against him, he plans an elopement, having already rejected Lata’s entreaties to do this, not long after their first date and kiss.
See what Danesh Razvi had to say about his role…

Amit Chatterji (Mikhail Sen pictured)
BBC character profile: The eldest sibling in Calcutta’s sophisticated and eccentric Chatterji family, Amit has abandoned his legal career to become a writer. A witty conversationalist, he forms an easy bond with Lata when he meets her at a family party. Slow to act on his feelings, and with her mother against the match, competition for Lata’s hand in marriage mounts against Amit.
ACV: A poet and deeply committed to his art – with a new book of poems published in England – the brilliant, Oxford-university educated Amit with dashing looks to match, appears better placed than Kabir. Indeed, the two meet and Kabir is consumed by jealousy and bitter envy, his relationship with Lata has faltered and he now sees Amit as one of its main causes. For his part, Amit is a sensation, when he comes to Lata’s and Kabir’s Brahmpur University to read from his latest published collection. He also sends Lata a personal copy with a special message and poem…how could any woman resist?
Hear why playing Amit Chatterji was perhaps more difficult than it looks…

Lata Mehra (Tanya Maniktala)
BBC character profile: Determined to do things her own way, Lata embodies the modern and newly independent India in which she is coming of age. Resisting her mother’s attempts to find her a husband, Lata is torn between family duty and the possibilities of love and desire.
ACV: There is a very little bad you can say about her – as she embodies the moral conscience of ‘A Suitable Boy’ and is the star around which there is a constellation – of men who want to romance her and put a ring on her finger, but what has she learnt about love? Is she ready to make a choice?

ACV: Does she want romance and passion – then Kabir, does she desire art and sensousness with Amit, or will she settle for the ambitious but very practical Haresh?

All will be revealed about Lata’s choice on Monday…

Privacy & Cookies: This site uses cookies. By continuing to use this website, you agree to their use.
To find out more, including how to control cookies, see here: Cookie Policy
← ‘Beecham House’ episode 1 & 2 recap and our live tweeting…
‘Delhi Crime’ Netflix hit – director Richie Mehta on what drove him and the cop in Delhi rape case investigation (BAFTA/LIFF talk 2019) →