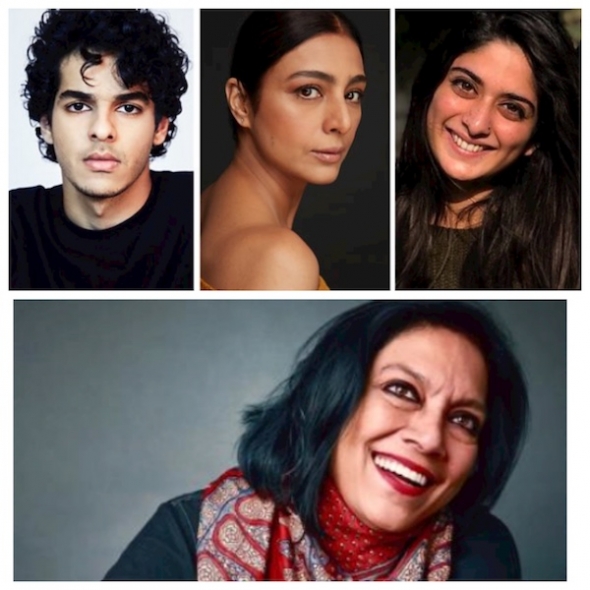 MIRA NAIR is more than a little excited to be making ‘A Suitable Boy’ for BBC TV, slightly tongue-in-cheek referring to it as “The crown made Brown”.

Filming on the six-part one-hour series and TV adaptation of Vikram Seth’s widely admired novel of the same title will begin shortly and the announcement of the cast caused a stir in both Britain and the India earlier this month.

Nair told www.asianculturevulture.com that she loved Seth’s novel and the opportunity to bring it to life on the small screen was an opportunity not to be missed.

“I love this novel, it’s a deeply humanist classic of our country – a tale of exactly who we are as a people and told through the portrait of four interwoven families.”

Describing it as an “intimate epic”, she said she wanted to ensure the series was made in India itself and with Indian actors.

“I wanted to shoot it in India, and cast it entirely from there – jokingly it is the crown made brown. I wanted actors from our place. It must have that magnificence and that sweep.

“It’s a tale about us and made by our own people, rather than those who speak of for us.”

The series is set in 1951 – just four years after Independence from Britain and the trauma of Partition, and the onset of the country’s first democratic elections.

“It’s set just a few years after the British were thrown out and you have different families – one from the old courtesan culture, another is from the Anglicised upper middle class culture, another from rural India, but all told in equal depth and measure and humour as well, and it is about a young woman finding out who she really is through her mother looking for a suitable boy,” Nair told acv on the sidelines of the Cannes Film Festival this year. (See more about that here)

Earlier this month, the BBC announced it had cast the main roles with the central role of ‘Lata’ going to relative newcomer, Tanya Maniktala;, the leading man will be Bollywood rising star, Ishaan Khatter who made a name for himself in Iranian auteur Majid Majid’s ‘Beyond the Clouds’ and Bollywood romancer ‘Dhadak’.

Playing the character of ‘Maan’ and related to Lata through marriage, his relationship with the beautiful courtesan, Saeeda Bai, essayed by the iconic Bollywood screen star Tabu, will be one of the pivotal relationships explored in Nair’s ‘A Suitable Boy’.

The series will be adapted for TV by BBC veteran Andrew Davies who has made many novels absolutely fizz on screen – his recent UK TV adaptations include ‘Les Miserables’ and ‘War and Peace’. He has been seen by some as making English classics, ‘Pride and Prejudice‘ more raunchy than they are for TV audiences. Others would counter that, saying there is no finer TV screen adaptor who has a populist and successful touch.

Seth is listed as an executive producer alongside Nair and Davies and Mona Qureshi for the BBC.

Seth confessed: “It was with some anxiety that I agreed to my book being put on the screen, but I’m glad I did. With Andrew adapting and Mira directing, I feel that my story is in safe yet inspiring hands.

“We all passionately believed that the series should be filmed in India with an Indian cast, and we have got great locations and wonderful actors.

“I am confident they will bring my characters brilliantly to life – and I hope they have a really good time doing so.”

The BBC is producing the series with production company, Lookout Point.

Faith Penhale, executive producer for Lookout Point, said: “Like all great stories, ‘A Suitable Boy’ has the power to thrill and move audiences everywhere, but what makes it truly special and unique is that it is a story born of India and about its people.

“So we’re thrilled to be able to celebrate this wonderful country on the international stage by working with an incredibly talented ensemble of Indian actors and by shooting everything on location.

“We hope to create a truly ground-breaking drama for the BBC and with the creative powerhouse of Vikram, Andrew and Mira at the helm we have every chance of doing so.”

Qureshi, BBC executive producer, said: “We are truly honoured that the first ever screen adaptation of Vikram’s iconic novel will be on BBC One.

“To have such remarkable talent involved in the show – an incredible all-Asian cast, the esteemed Andrew Davies and the wonderful Mira Nair – makes it very special. Production in India is about to start and we couldn’t be more excited.”

Nair told acv and three other journalists in Cannes that it would be a 15-week shoot in Northern India on location (BBC press release confirms Lucknow, and Maheshwar in Madhya Pradesh) and shooting was expected to start in late August, and Nair expects to be in the cutting room from January to May.

Currently there is no broadcast date but sometime in 2020 expect an announcement about it hitting BBC 1. It will be distributed outside the UK by BBC Studios and likely to feature on the forthcoming BritBox, a streaming service similar to Netflix and Amazon Prime.

Privacy & Cookies: This site uses cookies. By continuing to use this website, you agree to their use.
To find out more, including how to control cookies, see here: Cookie Policy
← Tribeca treats 2021: ‘Last Film Show’ (Gujarati), ‘India Sweets and Spices’ (Manisha Koirala) and lockdown comedy drama, ‘7 days’ (from team ‘Room 104’) and M Night Shyamalan on ‘Old’…
London Indian Film Festival 2021 – Hanif Kureishi: ‘My Beautiful Laundrette’ – how it changed his life, creating a joyous gay love story and how ‘hot’ Daniel Day-Lewis was… →