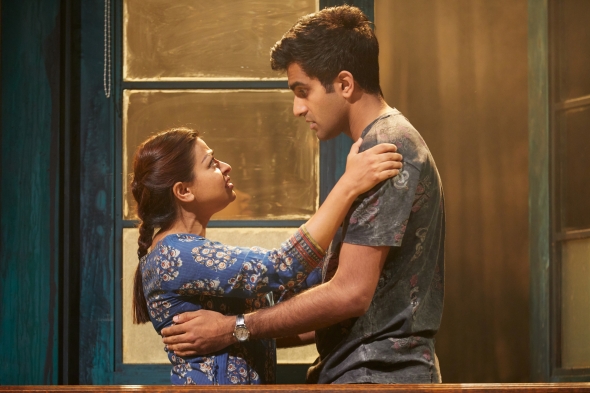 DARK and intense, ‘When the crows visit’, a new play by Anupama Chandrasekhar might be just your sort of drama, if you like this time of year (Halloween and all that).

While not a horror story in the traditional sense, it has a horrific story at the heart of it.

The family set-up is an intriguing one and the play is inspired by the great 19th century Norwegian playwright, Henrik Ibsen and his play, ‘Ghosts’.

It’s a recurring motif and one to hold at the back of your mind through this play.

At first, the stage is dominated by three women – Soni Razdan is the invalid mother, ‘Jaya’; her grown-up daughter-in-law is Ayesha Dharker, ‘Hema’ in the play, while nurse-cum-servant Ragini is played by Aryana Ramkhalawon.

There is a typical love-hate dimension to Jaya and Ragini’s personal dealings – Jaya is very dependent on Ragini for everything. It’s not the important relationship in the arc of this play – certainly the mother and daughter-in-law one are far more significant and telling.

This makes for something of a slow and laboured start and wasn’t helped on the evening by bellowing delivery and some inconsistent deployment of the characters’ accents.

Why British actors have to do this is a moot question – the play may be set in Chennai mostly, but the play is undermined by trying to be authentic in this fashion and some characters are far worse than others in this regard.

Indeed, in the interval, some commented casually that the production was shaky and uncertain of itself – yes, nerves on press evening are understandable, but you felt the pressure to get the accent right was distorting a lot of other more important considerations.

Sometimes the actors spoke too fast and their accents seemed inconsistent or just wrong (and this critic is of South Indian heritage).

The play settled down in the second half and had an assured level – perhaps that was because we saw more of Bally Gill as son, ‘Akshay’ and his mother, Hema (Dharker).

The play revolves around a particularly grisly incident and one loosely based on the Delhi rape of 2012. The graphic detail of that attack is similar to the one perpetrated in this.

There’s a fascinating interplay between the three – David and Akshay are old-time schoolfriends and you can’t help but feel David is doing his best to keep Akshay’s job at the firm.

Meanwhile, Kavita is the smart one, but clearly as a woman lacks power or respect – especially from Akshay.

Chandrasekhar hints at the sexual undertones at work between this trio – they are young, in the big city of Mumbai, and on a personal level, free to do as they want.

Kavita appears to have no romantic interest in either of her two male colleagues, but there is some sense of a sexual competition between the two men, though Chandrasekhar leaves it at no more than that.

Akshay and David become suspects in a horrible crime – and Akshay whose late father was a big shot returns home to Chennai and the play is a lot about how he and his family cope in the aftermath.

Chandrasekhar’s dramaturgy is not in doubt – this is a powerful piece and well-constructed, for the most part.

Some may find it a shade hackneyed (yes, corrupt Indian police officers are nothing new), but the message – and you should feel Chandrasekhar has one – is that women often protect and collude with men who don’t care about them and never really will – and they hardly understand this or even want to…

It isn’t preachy in the slightest (Chandrasekhar has far more to offer) – and you can see why Kiln artistic director Indhu Rubasingham wanted this play and chose to direct it.

www.asianculturevulture.com saw ‘When the Crows visit’ on October 29 2019 at the The Kiln, Kilburn.

Privacy & Cookies: This site uses cookies. By continuing to use this website, you agree to their use.
To find out more, including how to control cookies, see here: Cookie Policy
← Bird Bites update: ‘A night of knowing nothing’, Payal Kapadia; ‘The Long Goodbye’, Riz Ahmed and Aneil Karia; Lubaina Himid, first Tate Modern solo show and Amrita Dhallu
‘Empire State of Mind’: We need to talk about Race and Empire – Sathnam Sanghera’s TV follow-up to ‘Empireland’ →