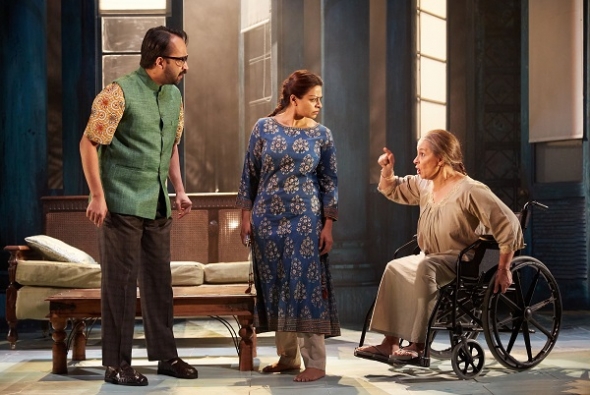 INSPIRED by Ibsen’s ‘Ghosts’, Anumpama Chandrasekhar’s new play ‘When the Crows Visit’ is a searing examination of contemporary gender relations.

“When a son returns home after being accused of a violent crime, a mother is forced to confront the ghosts of her past when the crows visit,” reads the promotional blurb.

Chandrashekhar has been lauded as one of the most important (Indian) playwrights working in theatre today by Indhu Rubasingham, the creative director of The Kiln Theatre in London, where the play has its press evening today (October 29 after previews from Wednesday ) and the production will run until November 30.

Rubasingham herself directs and www.asianculturevulture.com caught with up Chandrasekhar to talk about patriarchy, power and being a playwright in these fractious times.

“It is inspired by Ibsen’s ‘Ghosts’, but it’s not a transposition primarily because I am a twenty-first century female Indian playwright and he was a nineteenth century Norwegian playwright,” Chandrasekhar told acv before it has seen the play.

‘Ghosts’ deals with the story of a widow building an orphanage to preserve the memory of her dead husband, whereas in real life he was a violent, debauched, immoral man – and the consequences of that on the family.

The themes it deals with are morality, hypocrisy, gender violence, incest and euthanasia.

Chandrasekhar explained that the themes of ‘Ghosts’ are resonant with what is happening in our own culture (i.e. Indian culture) about how patterns are repeated.

“I was very interested in a cycle and the patterns of behaviour being repeated by generations and thinking about this play and gender violence in India – including the *Delhi incident – and seeing the attitudes of the general public, where they were going past the mutilated body of a girl and did nothing.

“What is it about our own society that makes us turn a blind eye and stops us from taking a stance?

“Misogyny is embedded in our system and has been passed on from generation to generation. While the concept of ‘Shame’ was true in 19th century Norway, it is still true in 21st century India.

“I have many things that cause me concern in Indian society and one is the position of women, which is starting to regress under this right wing government,” she argued. “My grandmother who grew up in pre-Independent India used to tell me that the independence movement brought together a whole lot of women and progressive ideas. But she now asks what has happened to you people? Why have you regressed?

“Progress is happening in pockets, but women’s rights are taking a bit of a back seat and as women we should be we watching out for each other and we aren’t.

“If a brutal crime takes place in the city we take note, but if it happens in the rural area we do not.”

This is her third collaboration with Rubasingham, and the two met when her play, ‘Free Outgoing’ was about to be programmed at the Royal Court.

They were introduced through Elyse Dodgson (who ran the International Department at the Royal Court before becoming its director and sadly passed away in October 2018), and the then artistic director, Dominic Cooke (2006-2013).

It was akin to an arranged marriage.

“She’s a Tamil woman like me (but from Sri Lanka) and our culture is similar.

“She would totally get my world in a way that a few directors can.

“After that, we did ‘Disconnect’ which is very different and about upcoming urban processionals but the ethos was Tamil and she got both the content and the form.”

As a playwright whose work is now internationally recognised, Anupama Chandrasekhar has come a long way since she began her debut at Royal Court.

‘Free Outgoing’ was based on a real incident of a schoolgirl who had sex with her boyfriend which was filmed by him and shared widely on social media causing moral outrage amongst the community.

It premiered at the Royal Court Upstairs in 2007 and was so successful that it was revived in main theatre in 2008 before going to the Edinburgh Fringe that August.

She was a runner up for the Evening Standard Theatre Award’s Charles Wintour Prize for Most Promising Playwright in 2008.

She was also shortlisted for the John Whiting Award and the Susan Smith Blackburn Prize, becoming the first Indian to be nominated for any of these awards. (More on ‘Free Outgoing’)

‘Disconnect’ (2010), is a black comedy set in Chennai that deals with the phenomenon of call centres where Indian workers pretend to be Americans complete with fake accents and a back story and the effect of this farcical life on their own situation.

Her work has been described as having “caustic wit and wry compassion” by playwright Simon Stephens.

‘When the Crows Visit’ was commissioned by Rubasingham when she became artistic director at the Kiln in 2012.

The two continued to have conversations and pondered why in a changing society, misogyny still had a place.

In 2016, Chandrasekhar was selected by the National Theatre to be its first International writer-in-residence for a year. This gave her the space and time to think about theatre, explore different types of work and write. She is working on a play commissioned by the National.

She currently lives in Chennai with her parents and grandmother and is an only child and only daughter.

“It was quite transgressive at the time when my parents had me and (they) made no attempts at trying for a son. Given their income they could only have one child.”

Her father was an engineer who has now retired and her mum is a homemaker.

This upbringing freed her to pursue the arts – however playwriting was not on the agenda, until one of her professors at the University of Madras where she was studying English literature pushed her into attending a writing workshop.

“I am so grateful to her now, I was so shy and diffident, but I did a first draft of a play, which was sent to the Royal Court, so in January 2000 it invited me to the International Residency programme in Mumbai.

“At the same time I got admitted to do a journalism MA in University of Illinois Urbana-Champaign.”

In Mumbai she met Carl Miller (playwright and dramaturge) and Phyllida Lloyd (film and theatre director), and “it changed my life when I saw what theatre could do”.

Chandrasekhar has collected three masters’ degrees and spent time doing freelance business journalism, but writing plays and being in the theatre is now a full time commitment. She pointed out that the state of theatre in India is “bad” and it is surviving against the odds.

“Theatre is flourishing in towns where they have dedicated theatre spaces such as Mumbai, Delhi and Bangalore.

“Other cities are at a disadvantage because they don’t have dedicated theatre spaces – they have auditoriums and so theatre going is not on everyone’s agenda.

“If you have an evening free you wouldn’t think of going to the theatre, you’d go to the cinema. There is no or hardly any state funding, people either get sponsorship or they use their own money to put on work.”

Despite this hardship, she wants to explore the verbatim theatre technique as she thinks it’s a fluid form to respond to fast paced events in India at the moment, because the news media has “relinquished their duty as purveyors of facts and the bias I am seeing in newspapers and television is unprecedented.

“They are crawling before their political masters and this has never happened before.

“Theatre can definitely bridge that gap and theatre can do what media can’t. It’s part of my long-term plan.”

There are very few playwrights in India commenting on contemporary society and Rubasingham considers her an important voice “In my opinion, she is the most important voice coming out of India and it is a real privilege to be directing and producing her new play here at Kiln Theatre.”

*Often referred to colloquially as ‘India’s daughter’ – this is the incident in December 2012 which shook the world when a young woman was brutally raped by a gang of men on a bus in Delhi and then thrown out onto the roadside with her male companion. She later died in hospital and the incident sparked riots and unrest in India.

All pictures: Mark Douet (The Kiln)

The KilnWhen the crows visit

Privacy & Cookies: This site uses cookies. By continuing to use this website, you agree to their use.
To find out more, including how to control cookies, see here: Cookie Policy
← ‘Here and Now’: World premiere for ‘choreographer of the future’ bharatanatyam artist Mythili Prakash performs at Dance Umbrella…
The Stories We Tell – Four lions tell it as it is…Tanika Gupta, Nish Kumar, Vinay Patel and Nikesh Shukla on representation, diversity and writing freely… →