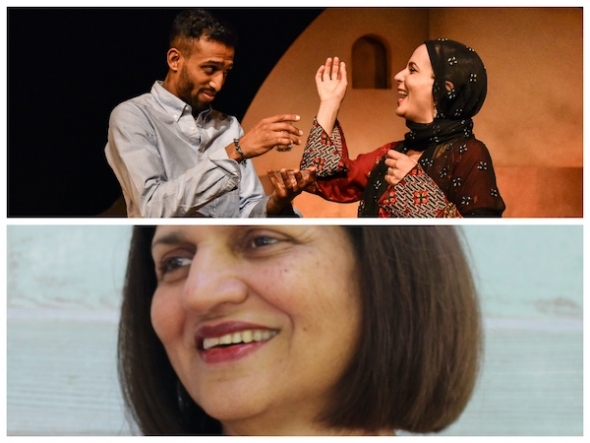 TALKING to writer Rukhsana Ahmad, who has returned to the stage with her new play, ‘Homing Birds’ produced by Kali theatre company – the show has been touring the UK opening at Theatre Royal, Plymouth on October 9 and travelling to Salisbury, Hornchurch, Leicester and is ending its run at Tara-Arts in South London tomorrow (Saturday, December 7).

Ahmad has taken a while to connect with us but we’re very pleased to have the conversation.

‘Homing Birds’ is a story of young Afghan refugee, ‘Saeed’ (Jay Varsani) who lives with his adopted parents in London and soon after his adopted mum passes away, he meets a very strong politician, ‘Raabia’ (Suzanne Ahmet), who kindles in him a desire to go back to Aghanisation, and search for a sister, Nazneen (Mona Khalili), who was left behind since they have long lost touch.

Meanwhile his father, ‘Michael’ (John O’Mahony), a middle-class lawyer type man wants his son to stay safe and tries to persuade him not to make an impulsive decision.

However, it’s not a lost and found tale as Ahmad has used this scenario as a point to present a meditation around what is home?

Where do we belong and how do we connect with our geography?

These themes are perennial quests for many migrants who have made the UK their home and this show explores some of these philosophical questions through the recurring motif of pigeons, which occur in the play as keeping pigeons is a big hobby in Afghanistan but they could be also called ‘homing birds’…

Ahmad told acv that the play was fuelled by meeting journalist, Nadene Ghouri at an “inspiration evening” organised by Kali theatre where Ghouri talked about two books she has co-authored.

The first was ‘The Favoured Daughter’ about the life of Afghan human rights activist and parliamentarian, Fawzia Koofi and the other, ‘The Lightless Sky: An Afghan Refugee Boy’s Journey of Escape to A New Life in Britain’ – the tale of a Gulwali Passarlay who left Aghanistan in 2006 to travel to the UK as a 13-year-old child refuge in the back of a refrigerated lorry and today is a politics graduate from Manchester University, as well as being a youth ambassador and a motivational speaker.

Ahmad has not been to Afghanistan – but grew up in Pakistan and spent a lot of time doing web-based research and reading books by authors, Nadeem Aslam and Khaled Hosseini (who have both written fiction set in Afghanistan; Hosseini lived there before emigrating to the US) and decided that what she really wanted to focus on was a meditation on the idea of home.

The play has four characters but I was particularly drawn to the women, especially Raabia, who espouses a kind of feminism that mixes idealism with pragmatism and knows how to negotiate around religion and the patriarchal systems of her culture.

Ahmad describes this as an “indigenous feminism”, where people on the ground take charge of their own affairs without the invading force (or ‘white saviours’, a familiar trope of similar literature).

Ahmad’s work has always been driven by her passion to articulate women’s perspective and to put women’s work centre stage and she has strived to do this through her output as writer, playwright, translator and her cultural activism.

One of her seminal works, ‘We Sinful Women: Contemporary Feminist Urdu Poetry‘ (1991) features translations of work by Kishwar Naheed (the title of the book is taken from her poem of the same name); Fahmida Riaz; Sara Shagufta, Zehra Nigah, Ishrat Aafreen , Neelma Sarwar and Saaeda Gazdar.
She was one of the founders of Asian Women’s Writers’ Workshop (along with Ravi Randhawa) which provided opportunities for women to come together and write, and later became the Asian Women’s Writer’s Collective.

It then seemed natural that she would go on to co-found Kali Theatre Company, along with actor, Rita Wolf as they had wanted to produce a play, ‘Song for a Sanctuary’ (1991), based on a true story of Balwant Kaur who was murdered by her husband.

The company continued as a project company putting on regular plays for about a decade and when they decided to apply for regular Arts Council funding, Ahmad and Wolf decided to step down, as Ahmad wanted to continue her independent career as a writer, and Wolf worked as an actor.

Ahmad has an extensive career writing for BBC Radio 4 and BBC World Service.

You can read more about the beginning of Kali theatre on the link attached, http://kalitheatre.co.uk/beginnings/

The company was then under the stewardship of Janet Steel from 2002-2016 and is now lead by Helena Bell who took over in December 2016.

She is also directing, ‘Homing Birds’, and Ahmad and Bell have known each other and collaborated before.

The first time was when Bell ran Alarmist Theatre and wanted to do a play based on Ahmad’s short story, ‘The Gatekeeper’s Wife’, which she asked her to adapt for the stage.

Bell also directed ‘The Ecstasy’ in 1999, ‘River on Fire’ (2001) and ‘Kabaddi, Kabaddi, Kabbadi’ (2012) for Kali and now invited Ahmad to write a play for Kali, which is ‘Homing Birds’ and you can catch it for one last time either this evening or tomorrow, where it has two final shows.

Privacy & Cookies: This site uses cookies. By continuing to use this website, you agree to their use.
To find out more, including how to control cookies, see here: Cookie Policy
← ‘Chotto Desh’ – Talking dance to see for children with artists Nicholas Ricchini and Dennis Alamanos (Akram Khan Dance)
London Film Festival 2018 world premiere of ‘Rajma Chawal’ (Rishi Kapoor and Leena Yadav, director) video soon… →