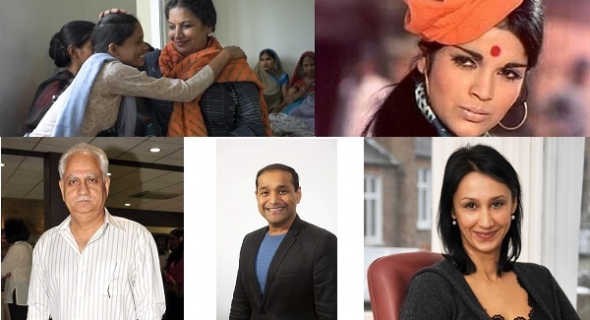 🎥 Zeenat Aman, 70s and 80s Bollywood icon who broke the mould in ‘In Conversation’ with presenter and broadcaster Anushka Arora at gala opening launch event

🎥 ACV to host reception with film screening – details to be announced tomorrow!

🎥 Scores of other premieres, screenings, and talks as festival spreads across UK – with venues in London; Leicester; Manchester and Glasgow

BRITAIN’S longest-running South Asian themed film festival hits cinemas later this month and promises to stir you from the comfort of your cinema seat – with the theme of revolution!

The festival, which has long had a feminist and female focused drive, and is now 21 years old, welcomes two iconic Indian women cinema figures to these shores.

Zeenat Aman was not your classic Bollywood heroine – preferring to play women who often subverted stereotypes, carved their own path and rarely played second fiddle to any man – let alone a conventional male hero.

But she was also a pin-up and much admired for the way she lived her life on her own terms.

In a series of films, she redefined female Bollywood roles – there was the disenchanted, pot-smoking hippie in ‘Hare Rama Krishna’ (1971 with Bollywood legend Dev Anand); in ‘Roti Kapda Aur Makaan’ (1974 and the title means literally, bread, clothing and shelter and was a popular political slogan), Aman played a woman who leaves her unemployed lover for a millionaire and in ‘Prem Shastra ’ (1974 – ‘Love Scriptures’), a woman who falls for a man who was once her mother’s lover.

She was never frightened of playing the rebel or being at the helm of a social revolution, championing women and asserting their independence, in all spheres from men. And there were more conventional Bollywood roles, but she inspired a generation to believe they could make it in the industry, without being subservient or playing simply meek characters at the behest of a man.

Her ‘In Conversation with Zeenat Aman’ at the May Fair Hotel, in London, with Sunrise Radio broadcaster Anushka Arora, is set to be a fascinating and unique journey into the female soul of Indian cinema in the 1980s to 1990s.

Shabana Azmi is one of India’s best-known actors and has long been at the forefront of progressive ideas and believes cinema and art can be a powerful tool for social change.

Ever the revolutionary calling for change – her role in ‘Ankur’ in 1974, made by the iconoclastic Shyam Benegal, is widely credited with paving the way for Parallel Cinema Movement in India.

This was different from traditional Bollywood and dealt with the nitty-gritty of Indian life and themes rarely covered in mainstream cinema.

Azmi will first conduct an actor’s masterclass in Leicester on Saturday (April 6) and then on Sunday (April 7) she will conduct a masterclass at BAFTA (sold out) and then will join others for the screening of ‘Kaifinama,’ in the afternoon at BAFTA. (See listing details below).

Later that same day, and separately in the late afternoon, the Closing Gala event will take place with both The Flame Awards, the UK Asian Film Festival awards and ‘In Conversation with Ramesh Sippy’ with Ayesha Hazarika, former No.10 Labour advisor and now award-winning stand-up comedian.

The Flame Awards recognise trailblazers of the film industry and the talk will be followed by the UK Asian Film Festival Awards.

The festival, which in its previous incarnations, has been known as Tongues on Fire and the London Asian Film Festival, will also look closely at the impact of the #MeToo movement in the South Asia and the repeal of Section 377 in India, making homosexual relations no longer illegal.

Sridhar Rangayan’s critically acclaimed ‘Evening Shadows’ comes to the UK for the first time. It charts the story of a young man who ‘comes out’ in Southern India – to find his mother being very supportive, while his father is his biggest opponent. It screens first in London on April 3 and then again on April 5 in Leicester. Daniel Luther from Queer Asia hosts the post screening Q&A.

Another groundbreaking movie and to screened for the first time in the UK is the transgender tale, ‘Ek Aasha’, about a girl’s simple desire to be a teacher. Made by director Mayur Katariya and featuring many transgender non-professional actors, the film is a timely and sensitive portrait both of a character and community, numbering some five million in India, beginning to find a voice – the film translates as A Hope.

Pakistani cinema gets a look-in too with the Shazia Ali Khan directed film – ‘Pinky Memsaab’ (2018), a delicious dissection of the South Asian expat life in Dubai – closing the film section part of the festival in London with a reception and screening at the Court House Hotel, Shoreditch, on Saturday, April 6. A post-screening Q&A will take place.

Dr Pushpinder Chowdhry MBE, director of the UK Asian Film Festival, said: “Revolutions help define who we are; they can either bring glorious freedom to our inner thinking and outer aspects of our lives or restrain us by what we think is acceptable. Only then can we break the boundaries to realise our full potential and to navigate our way in the world.”

For the first time too, young people, aged between 18-25, have been handed a special role as part of a Young Curators Lab, representing the future of film programming and film festivals going forward. Three films are in the running to be part of the Youth Gala – as the winner of the Young Curator Lab and will receive a special screening.

The opening film, ‘No Fathers in Kashmir’, ‘ Chegu’ and ‘Nobleman’ have all been supported by the Young Curators Lab.

Samir Bhamra, creative director of the UKAFF, said: “This festival has always been revolutionary.

“When Tongues on Fire started 21 years ago, it was the only festival in the world platforming female talent across all media.

“As a tribute to our pioneering start, the BFI has awarded funds from the National Lottery to also enable the UK Asian Film Festival to establish a Young Curators Lab to nurture a new generation of cinema audiences to appreciate and distinguish independent, South Asian films from all over the world. In short, we are handing control of a key gala screening to young people!”

There are many other great films, events and talks at the UK Asian Film Festival and be sure to be connected to us on Twitter, Facebook and Instagram to get the best coverage!

*More on individual films and talks in the run-up to the festival – stay tuned – subscribe to newsletter (editor@asianculturevulture.com) with more details on the acv screening… 🤗

🎥 Last year’s Gala Launch at the May Fair Hotel