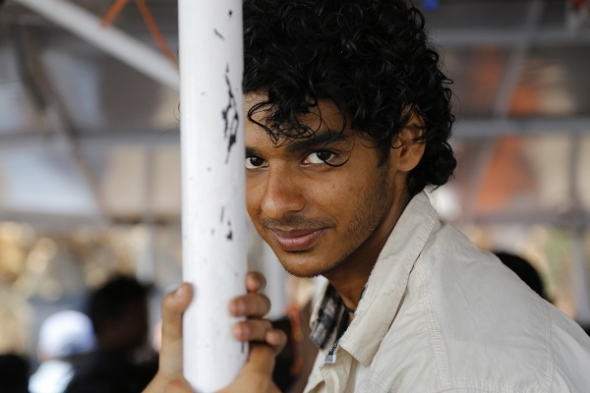 IT’S NOT EVERDAY that an Oscar-nominated director comes to India to make a film and that too with the half-brother of the well-known Bollywood star, Shahid Kapoor.

But that is precisely what ‘Beyond the Clouds’ is – a film made by Iranian Majid Majidi (nominated for his ‘Children of Heaven’ in the foreign language category of the Academy Awards in 1998)and choosing Ishaan Khatter to more or less carry this film on his slender, young shoulders.

Just 22 now, and making his debut as an adult, ‘Beyond the clouds’ effectively revolves around Khatter’s character, ‘Amir’ and his older screen sister, ‘Tara’ played by fellow debutante Malavika Mohanan.

Both are excellent in what is a very accomplished – though at times, quite harrowing, film – with Tara spending much of the time in a rat-infested jail.

Shot in a strong neo-realism mode, Amir is only one-step up from a sort of Mumbai street urchin – he’s cheeky, spunky and very streetwise and an orphan of working class origins.

Most young Indian men of this ilk (if we can be slightly provocative for a moment), fall into some form of sales work, some legal, some on the edges – in Amir’s case, drug-running.

Obviously, this line demands some compromises and his boss is a truly nasty piece of work who is well attuned to those young dealers who go-off message.

In among this is Tara, who has laid with the devil (make of that what you will and Majidi never shows his directorial hand on this) – and is now paying a difficult, if manageable, price for her compromises. For her, it was either that or the continuation of a violent and abusive marriage.

Majidi is extremely good at showing that when you are poor and asset-less, your choices are very limited and most humans will do the expedient thing – rather than something strictly honourable and starve and wither.

If there is cruelty and injustice on all sides, what hope do Amir or Tara have…?

They have only each other – at the beginning; by the end, the situation is quite different and that journey from just two people to a family of sorts goes to the very heart of this film.

This tender – perhaps sentimental – side of the film is when it is at its most effective.

Non-Bollywood name, Vishal Bhardwaj (who is best known in India as a director) penned the dialogue and some it again is fierce and difficult to stomach; and AR Rahman’s music as always adds another considerable dimension.

Majidi is a passionate admirer of Satyajit Ray, perhaps the greatest Indian master of them all, when it comes to making films (and making them look effortless) – and there are strong echoes of Ray in the grittiness and hard reality of a life on the margins.

The film enjoyed a premiere at the London Film Festival back in October, and Majidi in a post-screening Q&A lamented the fact that Indian filmmakers were too obsessed with gloss and superficialities to make movies about the country they lived in – and that if they looked more for what was on their doorstep, this would play out well with non-Bollywood audiences, in India or further afield.

That we believe is fair comment but for most filmmakers – not just Indian ones – making money is an important if not overriding objective and Bollywood differs not a jot from Hollywood in that.

What is perhaps more positive is that outsiders, like Majidi, continue to make strong films outside the system – appealing to non-Bollywood audiences and getting a slice of India rarely seen on the big screen.

Many Indians in India simply don’t want to see reality in 70mm right in front of them. Understandable. But Majidi does show perhaps that home-based Indian filmmakers are missing something and can be more imaginative and take more risks and appeal to a different type of audience, not just in India, but definitely more easily, outside India and its Bollywood preoccupations. Well done, Indian Zee Studios for backing.