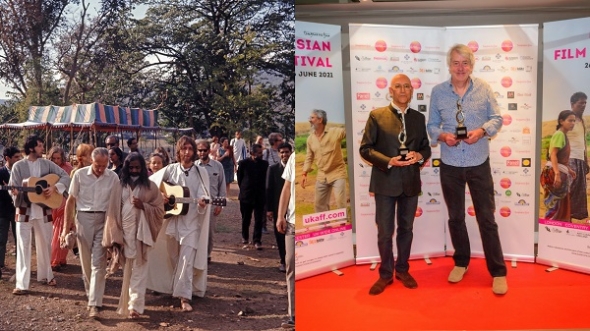 IN WHAT is the centenary birth year of legendary Indian director Satyajit Ray, the UK Asian Film Festival (UKAFF) closed its 23rd edition with a film that showed that cultural exchange between India and the West began to change significantly in the 1960s.

Ajoy Bose and Peter Compton’s new film, ‘The Beatles and India’ is an evocative documentary that puts what Indians thought of the world’s biggest pop group coming down to India in 1968 into a more illuminating perspective.

India was a generally closed society at the time and much closer to Eastern Europe in temperament and outlook as the documentary suggests – and somewhat culturally battered by two centuries of Colonialism, it wasn’t particularly confident of itself, but then, Indian culture became cool and celebrated – in part, because of The Beatles.

The West was finally looking in and discovering Indian culture through its music.

Pandit Ravi Shankar, the sitar maestro and India’s best known cultural export and the Maharishi Mahesh Yogi, better known as just Maharishi – whose message of peace and meditation, first enticed The Beatles to visit, both played their part.

Instead of Indians looking out for inspiration and ideas from the West – the opposite was happening.

It wasn’t all one-way traffic as Bose and Compton’s film well illustrates.

The film is produced by British based music entrepreneur Reynold D’Silva whose Silva Screen Records will release an album in the autumn, ‘The Beatles and India; Songs Inspired by the Film’ to to coincide with a wider screening of the documentary.

The album will reflect the impact The Beatles had musically – with many leading Indian musicians contributing – including Anoushka Shankar, Karsh Kale, and Benny Dayal, among others.

Bose and Compton interview lots of well-known Indians in their film, from cinema star Kabir Bedi to popular contemporary Indian musician and singer Dayal. Bedi worked at All India Radio in 1967 when The Beatles were on an earlier trip and managed to nab an interview with The Beatles manager, Brian Epstein, while Dayal said the inimitable musical legacy left by the group has remained powerful in India  – he was born in the 1980s.

Away from this film, www.asianculturevulture.com saw ‘Raaghir’, ‘Toofaan Mail’, the British made ‘Granada Nights’, ‘Nirvana Inn’, ‘I am Belmaya’, and the short documentary, ‘Ginsberg’s Karma’ – which in some ways is something of a loose companion piece to ‘The Beatles and India’.

You will find interviews with the directors of some of those films on our Youtube channel and their accompanying or stand alone reviews (all are separate videos).

The closing film ‘The Beatles and India’ won two awards at the festival.

There were awards too for Akriti Singh’s spirited ‘Toofaan Mail’ – the auteur who wrote, stars and directs in her film about a woman who turns up at Delhi Railway Station in 1974 and demands to see Prime Minister Indira Gandhi, claiming to be the Queen of Awadh (Lucknow), is powerful for the regal persona she inhabits – and the lost world she represents. It won a Youth Curated Choice Flame Award.

Shot on location in one of the oldest cities in Spain, it is a growing of age tale, starring Antonio Aakeel as a young Brit, who grows and develops as he fends for himself, following a painful break-up with his long-term girlfriend who is studying in the city. (Click on the links above for the interview with Khan and Aakeel or watch our review).

Belmaya Nepali and Sue Carpenter triumphed in the Best Documentary section with ‘I am Belmaya’.

Carpenter and Belmaya have forged an incredible partnership and the Nepali filmmaker is an almost perfect emblem of the theme, A Ray of Hope.

She escaped the horrors of a cruel care home in Nepal to make films with Carpenter and talks about her remarkable journey from impoverishment to achievement in their co-directed documentary.

We also reported on the nine short films which the festival commissioned and best reflected the theme of ‘A Ray of Hope’ to mark the 2021 festival. (For the full list of award winners see below)

It was good to be back in the cinema and the festival experience of mixing, sharing, and watching creative work with others was uplifting and a reminder that a post pandemic life is visible and almost within reach, all things being considered.

“Many audiences felt nervous initially but once they witnessed the safety measures we had organised with our venues over the several weeks of planning, they were able to relax.

“It was very special to be in a collective space and for them to enjoy these powerful and hope instilling films on the big screen,” he said.

Dr Pushpinder Chowdhry, founder of the original Tongues on Fire, as it was known in its inception and director of the festival, declared it an “outstanding success”.

“The films celebrated unique stories and focused on bringing Ray of hope in challenging times. Our gratitude to all the film makers who continue to entertain and enlighten in these challenging and ever changing times globally.”

Both opening and closing ceremonies were at the BFI Southbank in London.

David Somerset, BFI film programmer said: “It was a great privilege for the BFI Southbank public programme to partner with UKAFF, with extraordinary and distinctly different, sell-out film screenings that enrich our programme and respond to their festival theme, Ray of Hope, in this centenary celebratory year celebrating the great director, Satyajit Ray.”

The festival is supported by the BFI and Arts Council England with funds from the National Lottery and Department for Digital, Culture, Media and Sport.

See all our UKAFF videos on one page

Privacy & Cookies: This site uses cookies. By continuing to use this website, you agree to their use.
To find out more, including how to control cookies, see here: Cookie Policy
← ‘Photograph’ movie: Director Ritesh Batra and lead actor Sanya Malhotra talk to us at Sundance Film Festival 2019
‘Blinded by the light’ interviews and post-screening reaction at the Sundance Film Festival 2019 →