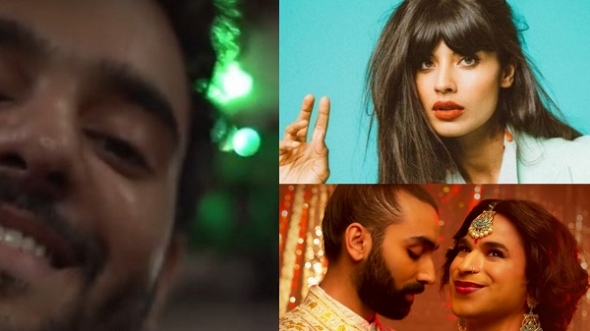 STAR Jameela Jamil tweeted her support of one of the forthcoming short films in the BFI’s Flare Film Festival which started yesterday (March 16-27).
BFI Flare is the British Film Institute’s London LGBTQIA+ film festival showcasing the most inspiring stories for – and about – these communities.
Jamil said of the British-made ‘Queer Parivaar’ – which enjoys its world premiere today at BFI Flare and released its trailer yesterday (Wednesday, March 16): “It’s a captivating musical celebration of South Asian queer love & community…check it out & catch the film at a festival near you!”
The film, made by writer-director Shiva Raichandani, also includes a cameo appearance by iconic DJ and activist DJ Ritu and features performer and media figure, Asifa Lahore. Raichandani also stars in the film (and is pictured on the right in the Queer Parivaar picture). The film celebrates a couple’s love and is enriched when a mysterious woman arrives at Raichandani’s character’s door.
Non-binary Raichandani has spoken to www.asianculturevulture.com about his film which he says showcases “positive and joyful” representations of “South Asians being in love and being loved for who they are”.
Acv has also seen the film and the Parivaar (family) which Raichandani, depicts is uplifting and beautiful. The film has a strong musical element – with some songs composed by Rushil, who with British singer Abi Sampa, an established star of Qawwali and semi classical Asian music; and vocals also from Emmy and the Oscar-nominated singer Bombay Jayashri.
Raichandani was born in Hong Kong and was raised in Dubai and Indonesia, while being educated in India and currently lives in London.
The film is expected to go on tour – and be screened outside the UK – as well, and also shows at Flare tomorrow (March 18) – screenings are officially sold out but check venue and standbys.
Keep following our socials (see home page icons) to see/read our interview with Raichandani.
More on the film here – https://www.queerparivaar.co.uk/

Digital offerings from around the world including India

DON’T despair if you find getting tickets for BFI Flare difficult or aren’t anywhere near London – the fest has an international digital element.
In partnership with the British Council, BFI Flare is hosting its annual (now in its eighth year) Five Films for Freedom strand.
One of these is Arun Fulara’s film ‘Sunday’, based around the loneliness of a middle- aged man on his weekly trip to the barber’s shop, as well as experimental short film ‘Frozen Out’ from Chinese director Hao Zhou, exploring rural Iowa and China.
British-Nigerian director Joy Gharoro-Akpojotor’s film ‘For Love’ focusses on an illegal immigrant’s challenges to do with her sexual identity; Croatian comic and animation artist Marko Djeska’s animation, ‘All Those Sensations In My Belly’ follows a trans girl’s transition as she looks for love, whilst Panamanian director Judith Corro’s ‘Birthday Boy’ is about parents denying their son’s identity as a trans man.
All these films are available to view for free on the British Council Arts YouTube channel https://www.youtube.com/playlist?list=PLdiB3YQ6fPnndqDjciREylU6R–vk43jZ

Show solidarity in countries where human rights are ‘limited’

ACTING icon Sir Ian McKellen voiced his support of the British Council’s Five Films for Freedom yesterday (March 16) tweeting – “I encourage people around the world to watch these #FiveFilmsForFreedom’ in solidarity with LGBTIQ+ communities, particularly in places where Freedom and equal rights are particularly limited.”