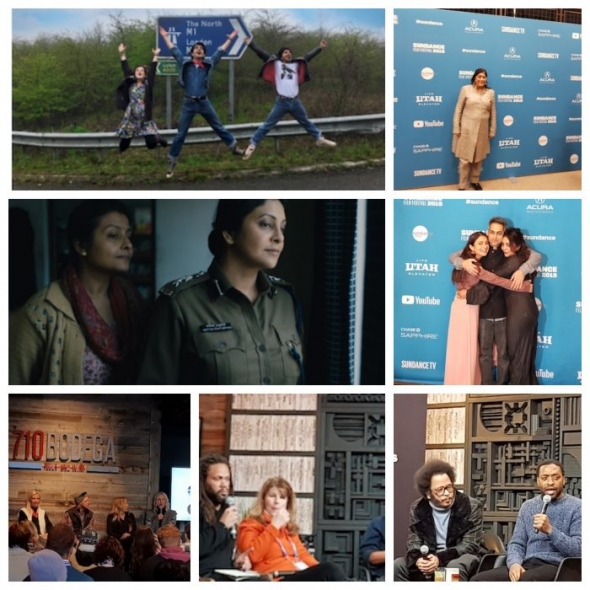 GURINDER CHADHA on verge of $15m (£12m) deal for new film, ‘Blinded by the Light’ – declared ‘biggest deal of Sundance’ this year…

SHE CAME, she saw and she most certainly conquered. Gurinder Chadha’s film, ‘Blinded by the Light’ (‘BBTL’) premiered here on Sunday evening (acv was there – see our video) and she told us yesterday (January 29), that people were contacting her management and bidding even before the film had finished. A few things remain to be finalised before the deal and details go public. She already had distribution in place with Entertainment One for some countries like Britain, France and Japan. She is naturally delighted and told acv she is looking to forward to promoting her Bruce Springsteen inspired film around the world. She also told acv about ‘Beecham House’ her glossy 18th century Raj drama set to hit our screens on ITV in June. She gave us the lowdown on ‘BBTL’ here and how she pulled this and ‘Beecham House’ all in the same year, following disappointment over ‘Viceroy’s House’. Yes, that is for another day, closer to the UK release date of ‘BBTL’. In the meantime she still has to placate one actor who hasn’t been paid – her 11-year-old son, who features in the opening sequence.
Sundance: Friday (February 1) and Saturday, Salt Lake City. Check http://www.sundance.org/now

FOR A COUPLE of hours, acv thought it was back in Delhi, India after watching London-based director Richie Mehta’s – ‘Delhi Crime Story’, now called simply, ‘Delhi Crime’. Based on the infamous 2012 Delhi rape case, it’s been turned into a 7-episode TV drama by Mehta.
Picked up by Netflix here, it will be ready for viewing on the streaming platform on March 22. Some reports state a second series has been commissioned but we didn’t get a chance to quiz Richie Mehta on that yesterday.
The first two episodes were screened yesterday here (January 29) and were very absorbing. Mehta had access to the original case files and the co-operation of the Delhi police themselves. He’s focused a lot on the role of two Delhi women police officers, one very senior played by the well-known Shefali Shah and the other, new young recruit, by Rasika Dugal (who some may recall from Anupam Singh’s ‘Qissa’). Mehta doesn’t spare us the very gory and horrifying details and it’s still very painful in places to think about what happened to the real Jyoti Singh and her family. We have interviews with Mehta, Shah and Dugal, and will run closer to the Netflix release date.

‘Official Secrets’ – being on the right side of history

WHO REMEMBERS the Iraq War and UK Prime Minister Tony Blair’s determination to take Britain into that war alongside the US? Most people on both sides of the Atlantic are pretty agreed, it was a disaster and cost many lives, British, American and most of all, Iraqi. A film that very much highlights these issues screened at Sundance last night (January 29). Called ‘Official Secrets’ it is centred around Katherine Gun (Keira Knightley), a GCHQ (the government’s listening post) worker who courageously exposed a US secret service memo that encouraged Britain and its secret services to look for any dirt on poor developing nations and then twist their arms to vote for intervention in Iraq at the United Nations (UN). It’s a very watchable film, powerful and understated in a British way with a very starry cast that also features Indira Verma as 2004 Liberty (the human rights organisation) chief Shami Chakrabarti and Ray Panthaki, as a senior Observer editor Kamal Ahmed, now of the BBC. Fine film by South African director Gavin Hood. Pacey and pulls you right in and there are fine supporting performances, not least Ralph Fiennes as the Liberty lawyer. Go see it when it comes out.
Sundance: Saturday and Sunday (Salt Lake City).

ONE OF THE GREAT pleasures of being at a festival like this is a chance to see and hear from the filmmakers themselves – and not just about their own films or in isolation.
On Main Street itself (the heart of the festival and rather like a quaint UK high street) is Filmmaker’s Lodge which houses Cinema Cafe, the New York Times’ sponsored panels and chats.
On Sunday morning (January 27), it brought an unlikely combination together in Boots Riley, whose first film, ‘Sorry to Bother you’ stormed Sundance and then the US – and played at London Film Festival, where acv saw it; and Chiwetel Ejifor, who brought his first film as a director to the festival – ‘The Boy who harnessed the wind’. The more prosaic reason might be that Riley whose film was developed through Sundance’s own Lab was assigned Ejifor as a mentor/guide. What was interesting was the contrast – Riley is a musician and that too a producer of music, but studied film initially at the prestigious San Francisco State University, before dropping out and believing the course wasn’t really catering for his style of filmmaking. He went into music but nursed an ambition to make films and Sundance helped him to get to where he has – but he didn’t have many leg ups and developed through the Oakland (California) community arts scene. That contrast was no better illustrated when Riley asked Ejifor about where he studied acting – the London Academy. Ejifor was also privately educated in the UK – but here were two super artists sharing a platform and talking about their art and craft with humour, intelligence and generosity. Riley said he went all ‘Hollywood’ and name dropped to get investors interested in financing his film – to which Ejifor retorted: “You should never name drop, you know who told me that, Mick Jagger.” Beautiful. It was captured on the Sundance dailies – a short clip of the proceeding day’s events, happenings and sayings, edited and screened before the fest films start properly.
As with other Cinema Cafe talks, it was live streamed and can be found here.

DIVERSITY, inclusion and getting a wider range of filmmakers into the industry, is built into the DNA of Sundance, we heard over and over again. At the opening day press conference (January 24), the statistics were disclosed – almost 50 per cent of films being screened at Sundance were by women, nearly a third by filmmakers of colour. The programmers said there was still a lot to do but reported they were making progress. This theme was elaborated and dissected by a panel on Friday (January 25) at Filmmakers Lodge. Most prominently there was Stacy L Smith, probably the leading authority on the business of gender and race in the US entertainment industry. She and her team at the USC Annenberg Inclusion Initiative have been collecting data for a while and they revealed a closer examination of the stats – not just of those films that got through to play at Sundance, but actual submissions and who they were coming from. While she confirmed progress, one startling statistic has failed to shift for some time now. Only four per cent of the films coming out of Hollywood are directed by women. Four per cent! Picking up on Nicole Kidman’s idea that she tries to make a film directed by a woman every 18 months, Smith has challenged her actor friends (she is the authority on inclusion riders in acting contracts and widely attributed as the person who invented them) to do the same and publicly declare their position. Constance Wu, the lead star of ‘Crazy, Rich Asians’, was among the most recent to rise to the challenge (declaring her allegiance on Twitter), as Smith has conceived it.
You should be able to view the debate yourself on Sundance’s Youtube Channel, but it doesn’t appear to be there for now.

Independent filmmakers doing their own thing…

SUNDANCE still holds a special place for many who want to make films independently and not have to worry about an investor’s or backers’ needs or wants in return.
Now, there are a range of platforms and people can make films quite modestly and have an outlet as simple as Youtube to make a point and share it with the world.
On Saturday (January 26) a panel of independent filmmakers came together to share their work with an invited audience and inspire others to follow a similar path. Indie Film Showcase was organised by Cloud 21 International and Kultura PR International. Allison Melody is an experienced filmmaker and well-known podcaster here with Food Heals Podcast and other radio-based shows. A public health activist, she promotes healthy eating and is making a documentary ‘Food Heals’ which shows some people using nutrition and alternative medicine to cure themselves of serious conditions. Also talking about their latest work, was Amon Baker and Karissa Akin, of Après Visuals, who worked on making a film up a mountain, which presented its own challenges. Akin is does not have a leg and ‘The Grand Journey’ chronicles her climbing a particular range close to their base in Jackson, Wyoming. While the two work mostly together on corporate films, both took time away to make ‘The Grand Journey’ and hope it will inspire anyone who has faced a difficulty or obstacle to overcome with willpower, grit and belief, such as that displayed by Akin and those who filmed her. Also contributing to the panel was author SA Williams, author of best-selling war-time novel, ‘Anna’s Secret Legacy’ and the sequel ‘Mackenzie’s Secret ’ . She spoke about switching from writing to screenwriting, the pitching process and knows many aspects of filmmaking having been involved in ‘Silver Linings Playbook’, and ‘The Age of Innocence’ among many others.
Moderating was Sue Vicory, an award-winning filmmaker who set up a non profit company and is a member of LA-based Alliance of Women Directors.
The organisers next stop will be Cannes and The French Riveriera Film Festival, which specialises in short form films.

Privacy & Cookies: This site uses cookies. By continuing to use this website, you agree to their use.
To find out more, including how to control cookies, see here: Cookie Policy
← ‘Where are you from?’ – The Scottish Asian comedian with the funny response – Lubna Kerr at Glasgow International Comedy Festival
‘The American Clock’ (review) – awesome production steals hearts and minds →