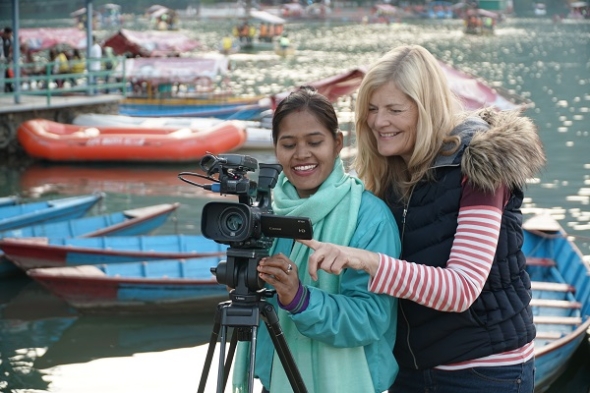 Born in poverty in a Nepali village, Belmaya’s future looked utterly bleak until she got to play with a camera as a young girl and then found an ally in producer Sue Carpenter…

NURTURING a person’s interests and abilities can be very powerful and this is superbly illustrated in the film ‘I am Belmaya’, which is available online as part of the UK Asian Film Festival’s virtual offerings (see listing below for details).

Director Sue Carpenter (pictured above to the right) first met Belmaya (left in above picture) in Nepal in 2006 when she went to work on a photography project there and Belmaya was about eight and living in a care home. Carpenter has a varied multi-media background, spanning photography, journalism, film and human rights advocacy. (See the link to her website below).

Belmaya enjoyed looking through the lens of the camera as “everything looks like fun through a camera. I felt I was free,” she says in this new film, ‘I am Belmaya’

She was treated badly at the home (we never learn why) and they took the cameras away and began to beat the children. So she ran away.

Cut to 2014, when Carpenter meets her again and gets involved with her and wants to make a film about Belmaya’s life but along the way encourages her also to learn the art of making videos and telling stories.

The documentary is shot in a narrative style – we see young Belmaya carrying stones in a basket on her back in her village of Pokhara always saying: “If I was educated I could have got a better job. My life would have been different, I wouldn’t have been married and dependant on my husband.”

In this film, shot over several years, we watch the young Belmaya train in filmmaking, from knowing how to look through a viewfinder, zoom, learn how to take long and mid-shots, interview people – all the while telling us about the life of girl children in small villages where boys are encouraged to be educated and girls are not.

We witness her relationship with her husband, Biren whom she married for love and his interaction with their daughter, Bipana of whom he is quite dismissive. They try to make a go of it and Belmaya goes to live in his village but when he drinks, he gets abusive and violent towards his wife.

Meanwhile, Belmaya continues to train herself and Carpenter connects her to people in the outside world, who give the young woman commissions to make short films, such as that about Boatwomen of Nepal – an amazing insight, but sadly, as I learnt later Belmaya couldn’t pursue this story because the men wouldn’t let the women participate.

Belmaya is an engaging subject for a film because she is very honest about her life and there is a quality about her that makes you feel for her.

“My life would be better if I had, had an education,” she continually asserts.

‘I am Belmaya’ is co-directed by the subject. It gives audiences an insight into the plight of a young woman from a small village in Nepal, who gains charge of her own destiny and future. It is uplifting and inspirational and well worth seeing and supporting.

In 2019, Belmaya’s co-directed short film with Carpenter, ‘Educate our daughters’ won the UK Asian short film category and in the interview below shot at that time, she talks to www.asianculturevulture.com’s Sailesh Ram about what the win meant to Belmaya and herself and you can see the journey from that short to this feature.

Listing
‘I Am Belmaya’ – https://www.modernfilms.com/ukaff (platform link and information)
You can watch it via the above link from tomorrow (June 3) at 6pm – certificate 18 cost £7.50 and once you have received the link you have 48 hours to watch the film

For our continuing coverage – http://asianculturevulture.com/portfolios/category/festivals/

Privacy & Cookies: This site uses cookies. By continuing to use this website, you agree to their use.
To find out more, including how to control cookies, see here: Cookie Policy
← Sundance 2021 – Indian film ‘Fire in the Mountains’ brilliantly encapsulates the challenges of modernity versus tradition… (Review)
Riz Ahmed executively produced film ‘Flee’ wows Sundance and bags first deal of festival →