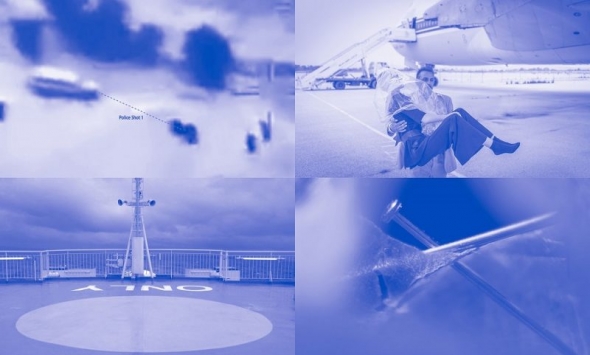 Four artists are up for Britain’s most coveted art prize, and the chance to win £25,000 – you can see their work at Tate Britain from today…

ALL THIS year’s Turner Prize nominees are filmmakers of one kind or another and the exhibition which opens today (September 26) at Tate Britain consists of four dark cinema rooms.

What is striking is that all have a very strong engagement in the world and are quite political, urging people to look at the world differently and seek change.

Among the four nominated artists this year is Naeem Mohaiemen who was born in London in 1969 but grew up in Dhaka and works there and in the US. He is currently working on his Ph.D in Anthropology at Columbia University.

The Tate says of his work, “Naeem Mohaiemen’s films and installations weave together archives, photographs and interviews”.

In our video below, Alex Farquharson, Tate director, explains that Mohaiemen’s films are shot in High Definition and his films have a sense of the cinematic and grand.

“He explores ideas of hopes and loneliness, focusing on countries freed from colonial world,” adds the Tate.

There is a strong interest in internationalism – one of his films look at the working of the Non-Aligned Movement (NAM) and the Organisation of Islamic Cooperation (OIC), two bodies created in the 1970s and in some ways a response to the Cold War and the stark division between East and West and both organisations were inspired by countries which did not feel entirely comfortable aligning themselves wholly to either the US or the Soviet Union.

He has also presented work which includes family history and one of his great uncles vested hope in Germany and the Indian National Army (led by Subhas Chandra Bose who was opposed to Mahatma Gandhi’s non-violent approach to freedom from Britain) liberating India when it was under British colonial rule.

Three films form the core of work being considered for the Turner Prize ‘Two Meetings and A Funeral’ – a documentary film displayed on three screens, looking at the power struggle between NAM and OIC in the 1970s.

‘Volume Eleven (flaw in the algorithm of cosmopolitanism)’ is a concertina book telling the story of Mohaiemen’s great uncle who entered the freedom struggle on the subcontinent with more sympathy for Bose than Gandhi.

‘Tripoli Cancelled’ is the artist’s first work of fiction – it follows the routine of a man who lives in an abandoned airport. Enigmatic and beautifully shot, it captures this strange solitary figure inhabiting a huge, virtually empty space.

Luke Willis Thompson is a New Zealand born artist of part-Fijian descent who has studied in Germany and the Elam School of Fine Arts, University of Auckland, between 2006-10 and is now based in London.

More seriously, Thompson’s work on display at Tate Britain, ‘autoportrait’ revisits an infamous shooting of a black man by a white cop in America. Also on view are ‘Cemetry of Uniforms and Liveries’, ‘_Human’, making a trilogy.

The description about ‘autoportrait’ is as follows from the Tate: “In July 2016, Diamond Reynolds broadcast live via Facebook the moments immediately after the fatal shooting of her partner, Philando Castile by a police officer during a traffic-stop in Minnesota.

“Thompson invited Reynolds to work with him to produce an aesthetic response that could act as a ‘sister image’ to her broadcast, breaking with the well-known imae of Reynolds caught in a moment of violence which had circulated widely online and in the news.” Thompson’s film was made before the trial and subsequent acquittal of the police officer.

Forensic Architecture as Farquharson points out in his introduction, use mixed media. They started as out an activist collective unit based at Goldsmiths, University of London and was founded by architect Eyal Weizman. It is made up of architects, filmmakers, software developers, investigative journalists, lawyers and scientists.

Its “methods respond to our changing media landscape – exemplified in the widespread availability of digital recording equipment, satellite imaging and platforms for data sharing – and propose new models of open source, citizen-led evidence gathering and analysis that has already contributed to developments in the field of human rights, journalism and visual cultures,” says the Tate in its biographical notes on Forensic Architecture.

Increasingly, they are using exhibition spaces to present their work and challenge ideas and norms.

At Tate, what is obvious about their work is their criticism of Israeli state policy towards the Bedouin community. In recent times, Israel has been forcibly ejecting these nomadic communities to make way for new settlements.

Their film, on show at Tate Britain, focuses on one such exercise and the death of two people.

Their work is called, ‘The Long Duration of a Split Second’ and consists of two parts – ‘Killing in Umm al Hiran 18 January 2017’ and ‘Traces of Bedouin Inhabitation’.

Charlotte Prodger makes much of her work on an I-phone and presents an intimate and affecting portrait of herself and the surrounding landscape of her home in Scotland. She explores her lesbian identity and radical ideas surrounding such an understanding of herself.
On display is her most autobiographical work to date, ‘BRIDGIT’.

“It is made up of recordings of the Scottish countryside as well as shots from inside Prodger’s home. Sounds from her environment are overlaid with a narration read by the artist and her friends including extracts from her diaries and books written by figures from queer history,” says the Tate.

The title ‘BRIDGIT’ refers to an ancient (female) deity who was widely followed in Neolithic times (c 2000-4000 BCE) across much of Europe but had different iterations.

The winner will be announced at a live ceremony broadcast by the BBC on December 4.
The Tate Britain exhibition continues until January 6 2019.
Nominees in bold