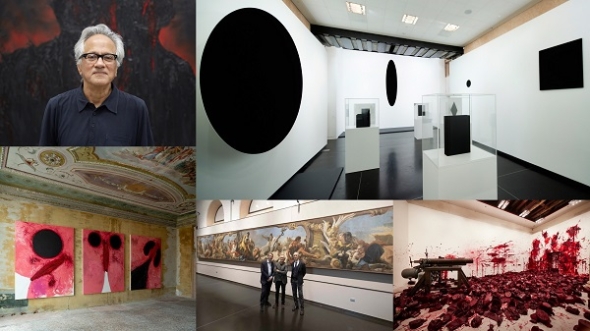 WITH much of the art world in Venice for the 59th edition of La Venice Biennale, which officially started today (April 20), one British artist continues to make waves and has some 60 works on display – including some new work that has already sparked intense debate.

Sir Anish Kapoor is the first British artist to be honoured with a major exhibition at the prestigious Gallerie Dell’ Accademia in Venice. He also has work displayed at the Palazzo Manfrin – which he has acquired and continues to refurbish through his Anish Kapoor Foundation.

Some critics believe it will in time house a permanent collection of his art and be something of a base for the artist whose own Venice Biennale debut, representing Britain, was in 1990.

These two exhibitions are separate to the Biennale itself but obviously form a significant backdrop to an extensive exhibition of work by one of the world’s best-known and widely admired artists.

Among the works being shown for the first time – and for which Kapoor has drawn much intense criticism from some other artists – is his work with vantablack – a form of black that quite literally blots out any light and is known as ‘the blackest of black’ humanly possible. Kapoor acquired the right to use it through the British company that manufactures it (for a form of military defence use) and exclusively so, barring other artists from possibly using it in their work too.

For this, controversy has raged for some years and continues to irritate some artists who believe artists should be able to use whatever colours and materials are available to them. Kapoor has more recently attempted to defuse the debate by saying vantablack is a technology and can’t be considered just a colour.

These new works on display are black forms (see above) against white backgrounds and look flat but have more to them when seen up close. Some of these new works are part of the Gallerie dell’ Accademia display.

Those familiar with Kapoor’s previous work and themes will recognise exhibits that appear to explore blood, guts and violence – the crimson is unavoidable.

His famous ‘Shooting into the Corner’ (Royal Academy 2009) features in the Gallerie and alongside its permanent historical exhibits presents a complex, uncomfortable conversation and further elaborated on in such work as ‘Pregnant White Within Me’ (2022) and prompts discussion of boundaries and forms present within the building itself and asks further questions about bodies, being and forms.

Newer work is also presented in red hues – and some critics have remarked that it somewhat reminds them of female genitalia – the colours, shape and form certainly arouse certain ideas of wonder, femininity and depth – depending on your perspective. Other work with these same colours suggest violence, eruptions and suffering.

The interplay of the classical art world both within the Gallerie itself and the Palazzo Manfrin (in previous times) present further complex juxtapositions, questions and prompts – with Kapoor’s work presenting itself in some ways as a provocation – perhaps too.

“This pendulous mass leads visitors through to a set of rooms in the unfinished building featuring works from throughout the career of the artist; the painting triptych ‘Internal Objects in Three Parts’ (2013– 2015), as well as ‘White Sand Red Millet Many Flowers’ (1982). A series of mirror works invert and distort the viewer. Heaven, hell, earth and sea are invoked in works such as ‘Turning Water Into Mirror, Blood into Sky’ (2003) and ‘Destierro’ (2017), an epic act of displacement. The central installation ‘Symphony for a Beloved Sun’ (2013) submerges the historic venue in the primal colour and the stuff of life and death”, says the press release about the two exhibition’s opening.

Palazzo Manfrin has an exceptional history and reputation as an art gallery and was visited in its nineteenth century heyday by such figures as Lord Byron and Manet.

It was first acquired by wealthy tobacco merchant Count Girolamo Manfrin in 1788.The Pallazo is still undergoing refurbishment and this opening appears to be a way of Kapoor announcing a greater involvement in Venice and perhaps a more active engagement with the Classical and Renaissance world that it represents in European culture.

Kapoor himself said: “It’s a huge honour to be invited to engage with the collections at the Gallerie dell’Accademia in Venice, perhaps one of the finest collections of classical painting anywhere in the world.”

“All art must engage with what went before. The Accademia presents a wonderful and wondrous challenge. I feel a deep commitment to Venice, its architecture and its support for the contemporary arts.”

Giulio Manieri Elia, the Accademia’s director, said: “Anish Kapoor has built his whole oeuvre on investigating the absolute essence of art in its constituent inner elements: form, pigment, perspective, light and its absence, facilitating in this creative investigation a stimulating dialogue with the art of the great Venetian Renaissance masters represented in the museum: Bellini,Titian, Tintoretto, Veronese.”

The exhibition itself was curated by art historian Taco Dibbits, who is also the general director of the Rijksmuseum in Amsterdam.

He said: “Kapoor creates works that are happening as we experience them. Throughout all of the spaces of this exhibition at the Gallerie dell’Accademia and Palazzo Manfrin, there is process and temporality on display and in action. These works exist in a continuous state of becoming, we are invited to witness these objects at just one moment in the process of their generation or de-generation.”

Both above pictures – Luca Zanon