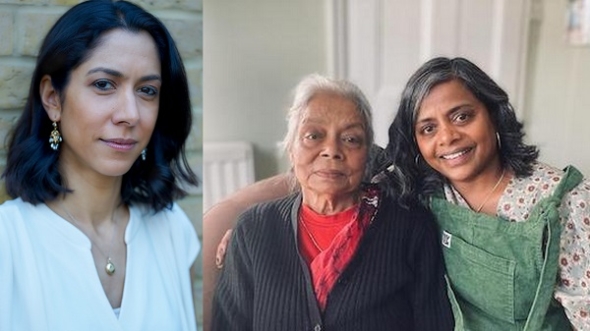 AWARD-WINNING journalist and author Kavita Puri’s hugely successful  radio show ‘Three Pounds in my Pocket’ has returned for a fifth series and documents the post-war history of British South Asians, with the second instalment of three dropping today (11am on Fridays until April 22 – see link below)

After nearly 10 years of the show, Puri has spanned stories from the 1950s, right through to the noughties of this century in the most recent series.

www.asianculturevulture.com spoke to Puri about this year’s episodes and how she came to make such a show.

“It started because I’d grown up with all these stories of people  arriving with a couple of pounds. People were coming with pounds sewn  into their Saris because they’d overgone the limit.

“So I really wanted to document those stories, and it was very much at  a time where no one had really done it before, and there wasn’t that  yearning to hear about those stories”.

When people came to the UK from the subcontinent at that time, they were only permitted to carry a very limited amount of cash, as foreign exchange was strictly controlled.

Puri is a broadcaster and executive producer for the BBC, as well as  the author of critically acclaimed book ‘Partition Voices: Untold British  Stories’.

She is also a regular presenter of the current affairs  programme ‘The Inquiry’ on BBC World Service and Radio 4.

Talking to acv, Puri found a profound sense of loneliness when talking  to her series 5 interviewees.

“I interviewed people to talk about the  amazing new communication revolution that happened in the noughties,  but what I learnt was that for decades, they would only call home  twice a year.”

In this day and age, the thought of being unable to call home is unthinkable.

“Imagine what it was like to only hear your parents voice twice a year, or to be told that your mum has died on the phone,” Puri explained.

She continued: “It made me re-look at some of the older testimonies, when they arrived and would cry all night, and miss their family and  I just realised this profound loneliness.”

One of the most memorable stories Puri remembers was between mother  Runi and daughter Farah, who talked about giving birth with her mother  present.

Puri said: “Runi had a memory of giving birth. Her mum wasn’t  there, no one was cooking for her and I just realised that thousands  of women raised these kids without that family structure and I don’t  what that must be like.”

She goes on to explain how Farah’s story has done a full circle since  she left her family home to go to university in Liverpool.

Farah stayed  in the UK until 2006 but eventually moved back home so her sons could learn more about Bengali culture.

In the 1950s, many South Asians migrated to the UK for low paid labour jobs, as many moved up the pay scale and eschewed certain forms of less well paying manual labour.

These lower income jobs included parts of manufacturing, the NHS and transport and tended to attract certain groups or particular communities.

Carrying on from this, Puri spoke about the universality of what it is  like to move away from home: “There is a universality to the process of migration, and you all have to make a decision about what you give up from home, and what you don’t, to survive and thrive in Britain. And  each generation is negotiating that in a very different way.”

She goes on to explain how everyone makes personal decisions about what they choose to give up, and that tensions that pull you in both directions is still very current, with people sometimes caught between East and West in terms of culture and mores.

When asked if she will make another series, Puri is certain she will,  and wants to keep going further and closer to our own times now.

“I feel like I’m making these series now when people are finally listening and really wanting to hear these  stories, and I hope they see them as British history, because that is what they are. From the Empire, these people came to Britain and there is now an awakening that people do, finally, want to hear these  stories”.

Episodes are released weekly, with the second today (April 15) and the third episode and final episode on Friday  (April 22) at 11am. It is available from BBC Sounds. More info here

Privacy & Cookies: This site uses cookies. By continuing to use this website, you agree to their use.
To find out more, including how to control cookies, see here: Cookie Policy
← ‘East is East’: A Personal Look by Suman Bhuchar
London Film Festival 2021: Opening Gala Film (review) – ‘The Harder they Fall’ – Stylish Western with brilliant black characters re-writes history as it must… →