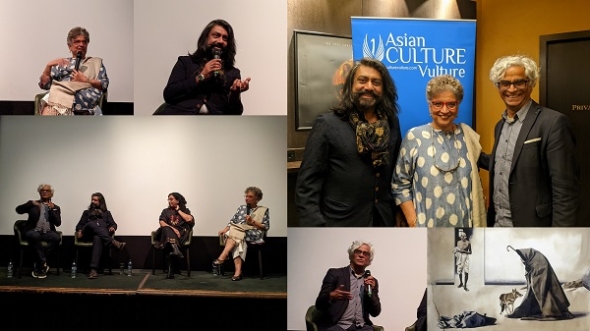 CREATIVITY, expression and its concomitant values were at the heart of a lively post screening Q&A, following the world premiere of the film, ‘Kekee Manzil: House of Art’.

The film screened as a world premiere at a sold-out Regent Street Cinema in London last night (May 8) as part of the UK Asian Film Festival (May 4-15).

Kekee Manzil is a grand old house in Bandra (see video below), Bombay (Mumbai) and it became the centre of artistic activity from the post-colonial period pretty much until the early 2000s.

Kekoo Gandhy and his wife Khorshed who lived at Kekee Manzil became patrons of the art scene locally and fostered a generation of artists who became known as The Progressive Artists Group – comprising famous Indian artists, such as FN Souza, KH Ara, HA Gade, MF Husain, SK Bakre and SH Raza – and a whole host of others as well who came later. Many of these figures are covered in this documentary film.

Filmmakers, UK-based Behroze Gandhy, who is daughter of Kekoo and Khorshed, and the narrator of the film, was joined on stage for the Q&A by director-editor Dilesh Korya, music composer, Talvin Singh, and film contributor and interviewee Shireen Gandhy, (Behroze’s younger sister) and moderator Professor Rosie Thomas from the University of Westminster, which is next door to the cinema and housed within the university complex.

Korya, who has worked with Behroze before, was sceptical initially, as to whether the film would have a wider resonance, but changed his view once he saw the art – it was clear there was a wider story, he told the audience.

And that is essentially too – what led Behroze to revisit her family archives, both old black and white pictures and cine film and a whole range of other sources, some formal, but many informal and discovered from the family archive. Kekoo Gandhy died in 2012, aged 92 and had been conferred with the Padma Shri, one of India’s highest civilian awards, for his services to the arts, in 2008. His wife Khorshed died shortly after Kekoo’s own passing.

Korya helped Behroze to blend the family archive with old interviews and newer ones – the film opens with Sir Anish Kapoor, one of the world’s most famous artists, talking about what Kekee Manzil and Kekoo Gandhy meant to him as a young artist growing up in the city.

Later in the film we hear from Sir Salman Rushdie who Behroze also interviewed and got to ask him a personal question about a character in his novel, ‘The Moor’s Last Sigh’ (1995).

Behroze said: “I asked him – allegedly one of the characters in the book is based on my father, Kekoo, to which he replied: ‘Allegedly, that is correct’.”

Singh talked about going back to his old Bombay record collection and being acutely aware of the music that influenced the city at certain periods – and how Jazz and more cinematic idioms played their part.

Korya said that the film in many ways was a celebration of artistic creation and freedom – during Emergency in 1975, Prime Minister Indira Gandhi cracked down on opposition and dissent – and many senior politicians were jailed and there was censorship and fear.

Behroze pointed out that there are similarities with that period today – the cosmopolitan and open-minded nature of the city was being constricted as politicians sought to control narratives and rally community support.

Korya ended the discussion saying that it was important art and artists challenged prevailing modes of thought and the idea of the “strong man” leader, which has become so popular globally more recently, also needed to tackled.

Look out for our interviews with Behroze Gandhy, Talvin Singh and Dilesh Korya – follow us on Twitter/Instagram/Facebook/ or simply subscribe to our Youtube channel and click to 🔔 know when they first drop on our channel.

www.asianculturevulture.com in partnership with the UK Asian Film Festival was proud to host a reception for the filmmakers and our own guests last night. We would like to thank all those who made it such an enjoyable experience – with special thanks to Behroze Gandhy, Dilesh Korya and Talvin Singh and Dr Pushpinder Chowdhry and Dr Toyeba Mushtaq from the UK Asian Film Festival and the wonderful staff at Regent Street Cinema – a big thank you to you all! 🙏

ALMOST unassuming in tone – at once, both intimate and precise, Behroze Gandhy’s ‘Kekee Manzil: House of Art’ is a beautiful, warming, hugely informative documentary.
What it does most excellently, perhaps, is tell the story of modern Indian art, simply and unpretentiously and the role of her family in that.
These artists were heavily influenced by European traditions and blended them with more overtly Indian expressions, often found in mythology or Indian styles, such as miniatures.
Anyone can watch this film – you do not have to be interested in art at all actually – because this film is about far more than the art and the artists, who congregated around the house, Kekee Manzil.
It is social history and a fascinating document of the city of Bombay/Mumbai and to some extent, its place in forging a wider Indian identity.
The film is both a celebration and one can’t help feel – a lament too.
The days of artists and communities mixing freely and without prejudice or fear – seem at threat – and what this film shows is the remarkable energy that came from these very different artists meeting, talking and sharing their art – sometimes not without controversy or scandal.
The film covers the sad exile of MF Husain, probably India’s most celebrated modern painter – banished after he incurred the wrath of those who felt he was denigrating Hinduism by painting its female deities naked – he left India in 2006, worried about his family and his personal safety and died in London in 2011, aged 95.
There is also a section on another celebrated modern painter – Bhupen Khakhar (1943-2003) – who lived openly as a gay man (in a time when homosexuality was pretty much taboo everywhere) and depicted naked men in a state of arousal with each other.
Behroze Gandhy’s film is an important document and one which tells both the incredible story about her family but, also and more crucially perhaps, the India that enabled them to flourish and gave rise to so many great and stimulating artists.

The UK Asian Film Festival continues till May 15 – the full programme: https://www.tonguesonfire.com/