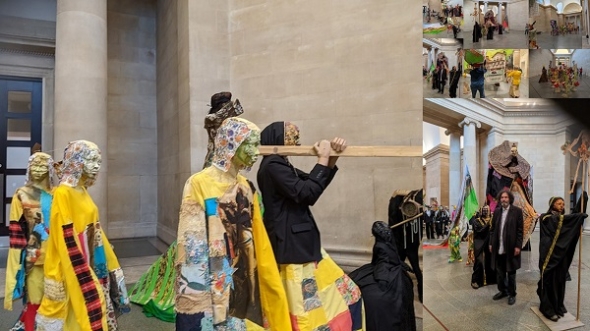 ARTIST Hew Locke’s new ‘The Procession’ can be seen free at Tate Britain now until early 2023.

It’s a magnificent, boisterous, difficult, demanding, macabre collection of life-size figures – some larger than life – others quite small models – arranged as though they really were in a procession.

When www.asianculturevulture.com first saw Locke’s creation at the press view on Monday (March 21), it felt like being on a very bizarre film set.

And while some of the figures are horrible to look at – there is a certain energy and scale that is both breathtaking and eerily beautiful. In some ways, Locke’s work recognises these ‘erased people’ from history and gives them a certain dignity and even joy but the pain and hurt are also evident too.

Locke was born in Edinburgh in 1959 (and is 62) but spent his formative years in Guyana, a one-time British colony, that may be well-known to many acv readers as it has a large (second only to Trinidad) Indian origin population – like their Trinny counterparts, these folks were indentured labourers the British brought to the Caribbean following the outlawing of the slave trade and the general emancipation of black people who populated the West Indies.

The Indian labourers were cheaper labour and were transported in substantial numbers during the 19th and early 20th century from India.

Hew’s work prefaces all this – he is acutely aware of this history and mixed up and complex identities and he is an artist who is very interested in history, memory and trajectories that intertwine and play with identity, nationhood and self-understanding.

There are echoes of all this in the current war in Ukraine and Locke alludes to it in both the work – some of the figures are kitted out in yellow and blue garments (the national colour of Ukraine) – and refers to it indirectly in our video too (see below please).

He discusses many of these themes about history and Taidentity (pre the Ukraine conflict) with Elana Crippa senior curator modern and contemporary British Art, in an interview with Locke, published in the Tate Etc magazine. Crippa can be seen in the video below – standing to the right of Locke when he speaks.

(Click to enlarge on some devices to watch the video)

Crippa also told acv that ‘The Procession’ both takes off and goes beyond anything Locke has already done.

In a short interview with acv on Monday, she explained that memory and traces play an important part in Locke’s narrative in ‘The Procession’.

Ships that carried Locke and his family between Guyana and Britain were also holiday cruise liners and at one point had brought people from the West Indies to work (and eventually settle) in Britain.

“There are references to previous work such as ‘The Tourists’ on HMS Belfast (in 2015, which also has figures who Locke imagines were going to celebrate carnival – one of the last journeys of that ship was to Trinidad and just after Carnival).”

Just as our contemporary Notting Hill Carnival is a joyous expression of Caribbean culture – ‘The Procession’ also has distinct echoes of carnival – both its energy, and joys, but also in Locke’s ‘The Procession’ the figures also wear the deep scars of history and exploitation.

Locke has commented on and referenced serious ecological issues too in Guyana – climate change has caused soil erosion and on a landscape which is already beneath sea level and in ‘The Procession’ the grand colonial houses that Locke saw as a boy growing up – have disappeared or are in a derelict or abandoned state or face being wiped away by climate change – these are also referenced in ‘The Procession’.

“There is a sense of loss,” Crippa told acv, “and there is translation of the architecture as ecological disaster.”

Locke did not work on the 130 or so figures all by his own and it took around a year for the figures to be made.

It’s a grand work and it took about a year to make.

Alex Farquharson, director of Tate Britain, said: “’The Procession’ is a powerful body of work that reflects on globalisation, colonialism, conflict, ecology, and cultural identity.

“Alongside our ‘Life Between Islands’ exhibition, this has been an exciting year of celebrating Caribbean British artists at Tate Britain, underscoring our commitment to showcase art that is reflective of the cross-cultural society we serve.”

In the Tate interview with Crippa, Locke talks about his uneasiness at an earlier exhibition Tate Britain ‘Artist and Empire’ (2015) and how discussions about Henry Tate (1819-1899) – the original benefactor of the galleries and the original magnate behind Tate & Lyle, the sugar company which formed after his death – were shut down at the time.

It feels like things have moved on – Tate actually has a page published in August 2019, explaining Tate’s personal background and relation to slavery and the plantations from which his wealth was derived.

Perhaps, the final word on ‘The Procession’ should go to Locke as he tells Crippa in his Tate interview.

“It’s about the historic and the imaginative in equal measure – and if visitors feel that, well, that’s enough for me.”

Listing
‘The Procession’ is on display at the Duveen Galleries and supported by AGC Equity Partners at Tate Britain, Millbank, London SW1P 4RG – (March 22) until February 4 2023
https://www.tate.org.uk/visit/tate-britain