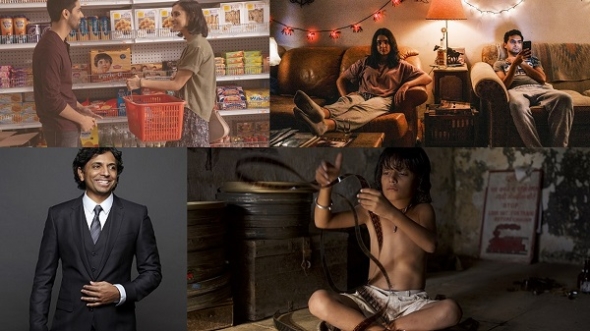 The festival created by Robert de Niro and others in the wake of 9/11 to revive a part of Manhattan, New York badly affected, celebrated 20 years and this year (June 9-20) was a mixture of in person events and digital screenings. We were able to view…

A beautiful love letter to cinema from Kathiawad

VIRTUALLY unmissable for the cinema aficionado is Pan Nalin’s ‘Last Film Show’.
It is a beautiful ode to cinema, and though we saw it on a widescreen computer, really, you should watch it in the cinema, if you can.
Nalin is not a new name – his ‘Angry Indian Goddesses’ (2015) is on Netflix and he broke through with ‘Samsara’ (2001). He is a filmmaker with a rich history of spending time in the west and blending the very best of Indian filmmaking with a European and indie art sensibility.
In the ‘Last Film Show’ you get the perfect offspring.
There is a strong homage to ‘Cinema Paradiso’ in the beginning, but the Indian context and the Gujarati vegetarian food element make it truly unique. This is about a young boy’s fascination and passion for cinema and he trades his lunch with the friendly projectionist to watch big screen films for free.
In the Q&A after its world premiere screening at Tribeca, Nalin said the film echoed his early life growing up in Kathiawad, Gujarat – an area we not have much seen on the big screen – in fact, few people there even go to cinema. They have to take a train like the main character to go to the movie house.
It’s beautiful – very lush and green and makes you think why more films have not been made in this part of India.
Going to the cinema in such rural outposts is a big affair – folks make a day of it. All this is charmingly depicted and in Bhavin Rabari as Samay, they have found a child actor of real gifts. It took an extensive search and Nalin saw some 3,000 in the process. Many of Samay’s friends in the film are just like him – local boys.
This is a joy from start to finish – and the end is both poignant and hopeful, but also tinged with a little sadness about the film industry itself.
It looks to have been a very personal project for Nalin, and his love letter to cinema – if it doesn’t charm you, then you’re simply not into cinema the way Nalin is… and that is a shame.
ACV rating: **** ½ (out of five)

DESPITE the slightly off-putting title ‘India Sweets and Spices’ – the name of a general South Asian store located in wealthy New Jersey (NJ) – there is a lot more to this film than meets the eye.
First up, it has two stars from India in it – Adil Hussain is a familiar face to anyone who has been to a festival that features Indian films, while Manisha Koirala is one of the biggest contemporary Bollywood stars there is – though she doesn’t do a great many productions these days.
They represent a moneyed generation in this – Hussain plays a successful doctor, and Koirala, his wife, a very aunty-homemaker mother type, with many airs and graces and secrets – that shouldn’t be.
Writer-director Geeta Malik’s second film starts inauspiciously and too much like a US teen comedy flick – first-year college girl living it up and having to return home from UCLA to NJ for the summer and yet it actually develops into a powerful female centred film which has a strong message about the generational split and how to live (well) and be true to yourself.
Alia (Sophia Ali) is a spunky, smart, no bs sort of young woman and back at home almost everything grates – except Varun (Rish Shah), the hot guy who works at his family’s India Sweets and Spices store.
You can kind of see where that goes – it isn’t Hollywood and Malik’s exploration of class, money and status is terrific and worth your time.
Great to see a young cast and Ali especially excel – don’t let this film pass you by, if you enjoy glossy entertainment with attractive folks, but with edge, purpose and insight. More from Malik, Ali, Shah, and Ved Sapru (as Rahul, another one of Alia’s suitors) please.
Acv rating *** ½

SHOT and written during lockdown – there is something of everything here.
Whether you were as lonely as hell, or just bored witless at times because you couldn’t really do very much outside of your house/apartment, ‘7 days’ is to relive all that and a bit…
Rita (Geraldine Viswanathan) and Ravi (Karan Soni) are doing that old school meet and date thing through family – yeah, and then lockdown happens and the two of them get stuck together.
Much of the early comedy comes from both being very much from different sides of the track as it were socially.
Rita is already in a relationship – sort of…Ravi on the other hand is your clean-cut mummy’s boy – but let’s be clear, they are both still looking…for the one.
When lockdown forces them to spend a lot of time together, the facades break down quickly and hilariously…
The film actually opens with real life testimonies – mainly of an older generation where there was not so much latitude as there is today.
Some may find all this a little passe and perhaps too much tilted towards a Western gaze.
Let’s leave the politics of that aside, and appreciate this on its own terms.
Viswanathan, who acv saw in ‘Hala’ and Soni are good and keep you engaged, even if some of the gags are little obvious and a bit too easy in lockdown.
If you can get past this, there is a movie with a sweet heart here – it might not be for everyone and perhaps as we get further away from lockdown, it might all seem a bit dated, but there are two actors with a lot of talent and if they were to be paired again, it would make us want to watch them in something quite different. Produced by the Duplass Brothers (of ‘Room 104’ fame), it is great to see them back new talent in director and co-writer Roshan Sethi, a medic who also writes and whose writing partner is Soni, who plays Ravi.
Acv rating: ***

ALSO making waves at Tribeca was writer-director M Night Shyamalan. His latest film, ‘Old’ comes out on July 23 and is causing quite the stir. It’s about a family who visit an island in the sun and then begin to mysteriously age during the course of just a day.
Shyamalan appeared on a panel along with co-star Alex Wolff and the two described the filming experience – it was one of the few big budget films (Universal Pictures) to be shot during lockdown last year. It helped that they were in the Dominican Republic and Shyamalan agreed to foot the costs of all to stay in a secure bubble and just go between a hotel and locations on the beach. He ran into bigger issues with the Hurricane season and his sets being destroyed. They had to film when conditions permitted. He told the audience on Friday (June 25) that ‘Old’ was inspired by his experience of his father ageing and his children starting to become independent and him thinking, when did this all happen. He also revealed that he had not decided how he would end the film – on a “minor note” as he speculated with the audience as he did in ‘Unbreakable’ to make it more memorable. It “sticks” to you, he intimated.