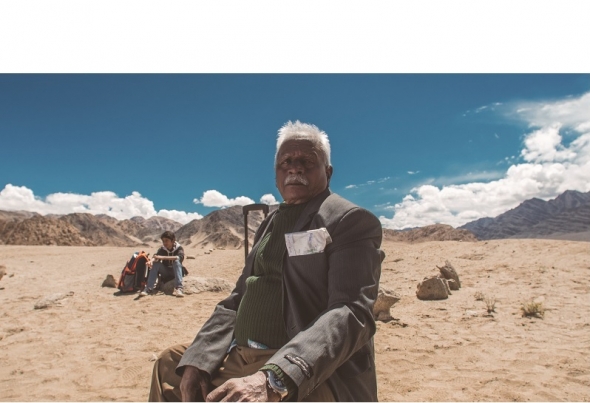 Gently paced and easy on the eye, even the most hardened urbanite will crave venturing into nature after watching this gem of a film…

THERE’S nothing quite like the deafening blare of beeping car horns to make you feel like you’re on the bustling streets of Mumbai, a city that is estimated to be nearly 50 times more noisy than London and New York.

If you’re visiting, these sounds will form the backdrop to your trip but imagine for one moment that you can’t escape them. That you’re entire life is plagued by the audio of urban life; traffic, music, conversations. Well that’s the situation protagonist Namdev Bhau (Namdev Gurav, who is a non-professional actor and an actual driver) finds himself in Dar Ghai’s ‘Namdev Bhau In Search Of Silence’; one of the highlights of this year’s BFI London Film Festival.

A charming and visually sumptuous watch, the film follows the journey of an elderly chauffeur as he leaves the noisy city behind in favour of a more peaceful life in ‘Silent Valley’, an oasis of solitude, deep in the Himalayan mountains (Ladakh).

It’s easy to sympathaise with Namdev. In the movie’s opening scenes our own hearing senses are put under assault as we’re exposed to the daily sounds he has to put up with, like the constant whines of his nagging of his wife.

Thankfully the film’s rowdy beginnings soon calm down and it’s not long until we’re accompanying Namdev on his adventure to find peace.

Stylistically shot in widescreen, it’s a captivating watch with scene after scene of exquisite backdrops that have an almost mythical quality to them.

From empty streets lined with colourful prayer flags to huge expanses of land where the screen is filled with blue skies and barren grounds, upon which Namdev looks like a tiny ant; it’s a film made for the big screen where you can fully immerse yourself in the tranquillity of the settings.

Namdev’s plans to seek out silence sadly don’t all go to plan. On one occasion he’s faced with sharing a hotel room with a talkative girl scared of ghosts, then later his expedition is hijacked by a young boy who too is heading into the mountains and won’t stop chatting to him.

Namdev himself is a man of small words yet his character is one with maximum impact.

His lack of dialogue is made up for by his subtle gestures, expressions and mannerisms.

When out of the blue he delivers some lines, it’s surprising how emotional it becomes for the viewer, to see this man we’ve cared for from the moment we first met him, to finally communicating his thoughts.

Ukranian Director Dar Gai tells this unexpected story with an intimacy that’s hard to fault and it will no doubt have you contemplating what silence means to you.

Privacy & Cookies: This site uses cookies. By continuing to use this website, you agree to their use.
To find out more, including how to control cookies, see here: Cookie Policy
← IFFAM 2019: Bollywood star Bhumi Pednekar character asked ‘what are your hobbies?’ in latest Bollywood film, replies: ‘Getting physical…’ talks about changing face of Indian popular cinema for women…
IFFAM 2019: Juliette Binoche (today) and Lily James (yesterday)… →