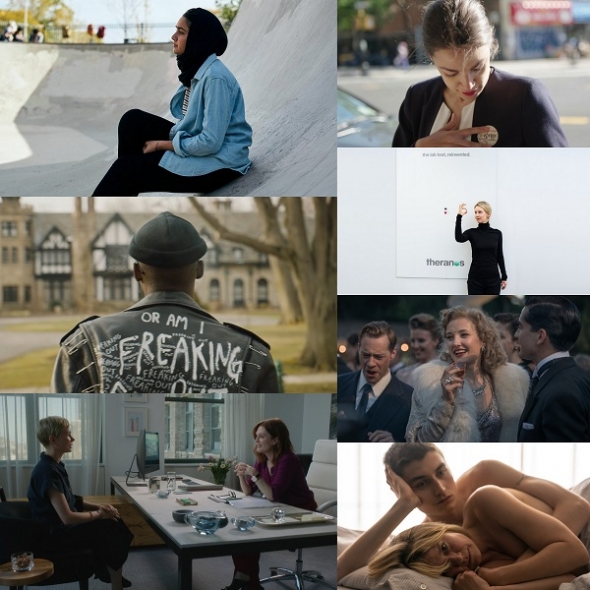 What we saw at this year’s festival…

Hala – Director – Minhal Baig
AMERICAN Minhal Baig’s second feature could represent a defining moment for South Asian features of this type in North America. Hala (Geraldine Vishwanathan) is a young woman with distinct and wholly relatable sexual desires, but she runs up against a culture which continues to value ‘purity’ and female chasteness among many things, if not above them all. Somewhat tongue-in-cheek, the oppressive Pakistani father is fast becoming some form of cinematic trope in the West, (from ‘East to East’ to even Gurinder Chadha’s latest, ‘Blinded by the Light’).
What Baig does especially well in ‘Hala’ is to illustrate the shifting perspectives of mother and father, and showing how patriarchy works within in a tight-knit family unit. Single-child Hala is sensitive and enjoys a decent relationship with her father; with her mother, there are arguments. Once a pretty boy and a fellow aspiring poet enter Hala’s life, everything changes. The father is adamant – mixing with boys socially is strictly prohibited and brings shame to the whole family – and the ‘community’ will recoil. For young and slender shoulders, these are huge and difficult pressures – inevitably, Hala reacts. A measured central performance, high production values and an intelligent and sensitive treatment make this a feature and director very much worth your time, even if you are slightly uncomfortable with certain stereotypes being constantly perpetuated. Baig bagged a decent distribution deal at Sundance and has fulfilled the potential Jade Pinkett Smith invested in her as an executive producer – definitely one to watch in this space.
ACV rating: ***½ (all out of five)

After the wedding – Bart Freundlich

SUMPTUOUSLY shot, and with the ever-impressive Julianne Moore at the centre of a movie directed by her husband, Bart Freundlich, this has quite a lot going for it – though at the beginning it might appear less than promising.
Adapted from a 2006 Danish film and tweaked to change the gender focus, ‘Isabel’ (Michelle Williams) feels fulfilled running an orphanage in Kolkata.
However, money is tight and word comes through that an American donor (Moore’s character Theresa) is willing to put millions into the orphanage.
Isabel has to leave Kolkata and go to her old stomping ground of New York. There, there are painful remembrances of things past. Astutely plotted, we never quite see the machinations at play until the final quarter – a good thing. Power, money and control, both personal and at a meta level, political, all sit somewhere in this intriguing mix. How it plays out is both painful and absorbing and worth your time because it asks big questions but has no simple answers.
ACV rating: ***

*Queen of Hearts – May el-Toukhy
UNUSUAL, different and skilfully handled by May el-Toukhy, there’s no great shock in learning that this won a 2019 audience award.
From a theatre background and brought up in Denmark with a Danish mother and a father of Egyptian origin, Toukhy has crafted movie which explores #MeToo with a woman at the centre of the ‘abuse’.
Anne (Trine Dyrholm) is a very successful lawyer and often represents victims in cases of child abuse. She shares a beautiful home with her doctor husband, Peter and they have twin daughters. Toukhy paints a beautiful portrait of their family life – but everything is disturbed when Peter’s 17-year-old troubled son from a previous relationship comes to live with them. You can kind of predict what happens – the publicity photo gives it away – but what transpires is shocking and unforgettable. Toukhy’s skill is to keep shifting your sympathies till they are exhausted or misdirected. Quietly brilliant, if you can stay with what seems like a prolonged climax. ACV rating: *** ½

**Knock down the house – Rachel Lears
ONE ONLY needs to say, ‘Alexandria Ocasio-Cortez’ to cause excitement in some quarters – and rightly so. But director Rachel Lears could hardly have known she was documenting the rise of someone who was going to be on a nation’s lips. Her film is about four Democrat Party candidates fighting the 2018 primaries in various regions of the US. Of the four subjects – Amy Vilela, Cori Bush and Paula Jean Swearengin – Ocasio-Cortez is the only success story. But that is to miss the essential point – that a new breed of Democrat candidate is emerging – more socially engaged, anti-corporate, and determined to improve the lot of working people, especially those forgotten about or left behind. It’s a great ride because Ocasio-Cortez upsets all the odds – and is a star from the get-go. Photogenic, vulnerable and passionate, it’s hard not to be charmed by her. There’s no surprise in this winning an award – and for some, perhaps the bigger disappointment was Ocasio-Cortez not showing up at Sundance as expected for the premiere, after the government shutdown had ended. Acv rating:*** ½

‘Native Son’ – Rashid Johnson
CONTEMPORISED from a Richard Wright 1940s novel, this exploration of young black working-class man caught in a bind is a little hard to stomach.
Bright, street-smart, and capable, ‘Bigger ‘Big’ Thomas’ (Ashton Sanders) signs on the dotted line to be a chauffeur to a wealthy Chicago family, eschewing an easy hit job on a corner store, with another young black friend.
All seems dandy, until college-attending Mary, daughter of Big’s new rich boss, starts making eyes at her family’s new, handsome young black driver. Precocious, liberal and politically engaged, you can feel the (sexual) tension largely driven by her. Disconcerting and slightly unbelievably, Thomas does something foolish and seemingly out of character.
Director Johnson – a multi-media artist making his first film – is clearly talented and has much to offer, but whether he was simply being faithful to screenwriter Suzan-Lori Parks’ adaptation or Wright himself, the movie for this critic, crumbled on the basis of Thomas’ seemingly out of character move.
ACV rating: ***

The inventor: out for blood in Silicon Valley – Alex Gibney. (Documentary)
ELIZABETH HOLMES was a media darling and a global celebrity at one point.
Her company was lauded as one that might change the way humans approach health and well-being – and her personally, as significant to medicine as Steve Jobs (the founder of Apple) is to mobile phones.
She ran with the hyperbole – never letting on – it was and appeared sincere and earnest in interviews and the like. However, it is rather telling though, when someone doesn’t blink, as one of the respondents in this film reminds us of Holmes. Interviewing people who worked at the firm and saw its escalating folly, and journalists who covered her rise and then investigated the counter-claims, Gibney charges Holmes with falsehood and screams ‘fraud’ . Whether you believe(d) Holmes and her partner, (business or otherwise, Gibney does not clarify), ‘Sunny’ Balwani, is at the crux of the whole affair. Both are currently indicted and await trial. Director Gibney suggests this is not just a one-off case, aka the title. Provocative. ACV rating: **½

Sonja – The White Swan – Anne Sewitsky
SEWITSKY is award-winning Sundance alumni – the world cinema dramatic jury prize in 2011 for ‘Happy, Happy’ and this film is entertaining and fun – but with a requisite dark side.
Sonja Henie (Ine Marie Wilmann) was a real Olympic ice-skating champion who transferred to films and showbiz after relocating to LA and Hollywood in 1937.
She was something of a female hell-raiser and Sewitsky is not frightened of depicting a feminine hedonist who wanted it all and had it for a time. It has the feel of a modern ‘Sunset Boulevard’ in full modern and glorious technicolour. Very watchable, if you like your Hollywood uncorked.
ACV rating: ***

Privacy & Cookies: This site uses cookies. By continuing to use this website, you agree to their use.
To find out more, including how to control cookies, see here: Cookie Policy
← London Film Festival 2020: ‘The Disciple’ – Ancient and modern clash in this absorbing study of an aspiring musican… (review)
London Confidential, Climb Media, and Wakaalat from home – ACV Bird Eye Review Show episode 6 (video) →