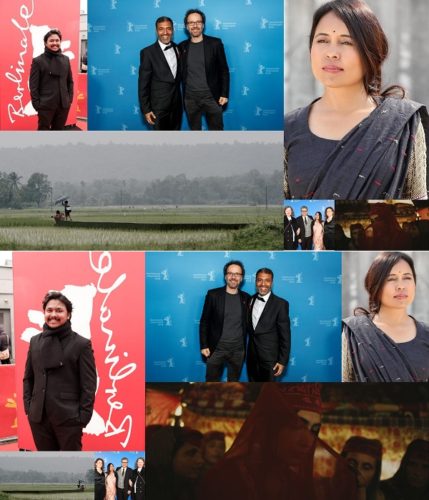 THIS year there were three points of interest in the latter part of the festival for any keen observer of Indian cinema (in the strict sense of a country being defined by its geographical boundaries); and www.asianculturevulture.com contributor Tatiana Rosenstein was in Berlin between February 20-March 1, and caught up with director Pushpendra Singh whose film ‘The Shepherdhess and the Seven Songs’ featured in a new competition section called Encounters; director Rima Das who was invited to serve on the Generation 14 plus International Jury and director Askshay Indikar whose ‘Sthalpuran’ was included in the 14 plus section.

‘The Shepherdess and the Seven Songs’ by Pushpendra Singh is a partly allegoric, partly ethnographic study, as well as being, a partly feminist fairy tale.

It focuses on the character of a young and beautiful shepherdess ‘Laila’ from the Bakarwal tribe, trapped between her cowardly husband and the harassment of local officials and set in Kashmir. The story is based on the folk-tale ‘Kenchuli’ by award winning writer Vijaydan Detha (1926-2013).

It was this writer who gave Pushpendra his first film too, an adaptation of Detha’s story which became ‘Lajwanti’. It premiered at the Berlinale in 2014.

‘The Shepherdess and the Seven Songs’ is divided into seven chapters and each is marked by a song depicting the state of Laila – Pushpendra told acv he was influenced by the number seven “because of sufism, where there are seven stages to attain oneness with God”.

A former actor, he came across Detha when he was looking to adapt work from classical Indian literature.

Pushpendra said he was impressed by Detha’s language and his feminist take.

“Detha wrote his prose like poetry, especially because he was not using Hindi, but Rajasthani, which is written in the ancient language of Dingal.
“It appears like poetry in which one could have so many expressions and words to describe just one banal object.”

Despite hailing from a nomadic tribe in Rajasthan, Pushpendra made his film in a different part of India. He felt it had similar resonances to Rajasthan and wanted to examine a culture in danger of dying – he didn’t do it for any political purposes and made his film before the Indian government took the step of changing Kashmir’s political status. Known as Article 370, it was revoked by the BJP government last year and meant the region had less autonomy and citizens from anywhere in India could buy property and settle there (in theory). Pushpendra said he was governed more by culture and music of the region.

“I did research mostly using radio archives, I met people colleting traditional songs. My male lead in the film is a folk singer himself – he composed some songs for me,” he told acv. Pushpendra’s film has a strong feminist ethic.

“Detha speaks about emancipation of women, about the way how women challenge the idea of sexuality and explored their desires. I agree with him. I believe that women are more liberated souls, they give birth to us; they are creators! It’s man who tries to jail, repress and control them because at some point they were more successful,” Pushpendra told acv in Berlin.

In the film, the husband is very passive, while Laila is more assertive. “It is connected to the caste system and family traditions, where females are totally humiliated and disgraced but they are more often braver than the males,” said Pushpendra.

His film also gropes towards a deep spirituality and one that reaches across common (and some might say increasing) religious divisions.

“In 14th and 15th centuries, there was a movement called Bhakti, which referred to devotion for a personal god, and it somehow reunited constantly conflicting Hindus and Muslims by creating a bridge.

“Summarised it was about – that God is not outside but inside of each person. While religion used to be and remains a very problematic topic, it separates people instead of reuniting them. Spirituality doesn’t. I see the solution of all the tensions, including those between Hindus and Muslims, in spirituality, which is about connecting with the roots and finding the peace within.”

For filmmaker Rima Das this year’s Berlinale was both a return and a recognition of how far she has come. Invited to serve on the Generation14plus jury, she was humbled. Her last film ‘Bulbul Can Sing‘ screened at the Berlinale in 2019 and her first film, ‘Village Rockstars‘ (2017) proved a hit and was critically acclaimed and toured the international festival circuit. Das comes from north-east India, not the traditional hub of filmmaking in Mumbai or from more recognised areas of independent filmmaking in India.

“Last year I felt like a student,” Das told acv in Berlin, “but now the festival raised me to the level of a Master, allowing me to judge films of others.

“It’s huge, not only because I started making films only three years ago, but also because in the whole world there are so many talented and qualified filmmakers, but among them, they have chosen me.”

She was on the three-strong International Jury Generation 14plus alongside Abbas Amini from Iran, director of ‘Hendi & Harmoz‘ (2018) and ‘Valderrama‘ (2016) which featured at Berlinale and South African Jenna Bass, director of ‘Flatland’ (2019) and ‘High Fantasy’ (2017).

Jurors are required to watch 14 features and 14 short films within eight festival days.

However, Das – known for stamina – managed to visit other film strand sections as well.

“The films of the main competition have really bothered me. It made me sad to see all that we are experiencing in our troubled and politically insecure world.

“I was happy to return to my section, which is about kids, innocence and pure emotions. I feel that even if we live in pain and darkness, we still need to look for light. The sun keeps rising every day”.

One of the common discussion points of her competition strand was the communication gap between adults and children – now exacerbated by a digital gulf.

One of the youngest filmmakers participating in the Generation14plus strand was Akshay Indikar.

The 28-year-old’s film ‘Sthalpuran’ which premiered in Berlin, is his second feature and is about an eight-year-old called ‘Dighu’ who moves from Pune to the west coast after his father walks out on the family. Dighu is unaware of the reasons for his father’s departure and keeps a diary which helps to him cope with the loss and adapt to his new environment.

The title is derived from Sanskrit and means roughly, ‘history of the space’ or just ‘space’. It’s about the uniqueness and language of spaces, he told acv.

“Language is something, which preserves culture and identity, and which maintains your uniqueness. That is why I make my films in Marathi, as it is more complex than English. I think the presence of English is very political and when you canonise things you put them in an uniform manner. I prefer to celebrate different identities”, said the filmmaker to acv in Berlin.

There isn’t much dialogue in Indikar’s film and he prefers to tell his story through images and even the narrative is perhaps more visual than with anything as discernible as a plot.

“It’s s about my personal taste. I don’t feel a need for dialogues. I rather prefer a visual expression, which leads to multiple meanings than an explanation and (authorial) voice.

“This film is not about story, but storytelling. I tell my story with images. It’s a poetic cinema,” said the filmmaker who comes from another nomadic community and dropped out of the prestigious Film and Television Institute of India (in Pune) and was he says, brought up on a diet of (Bollywood) cinema celebrating Sunny Deol and Amitabh Bachchan.

The top award in Berlin this year was won by Iranian filmmaker Mohammad Rasoulof for ‘There Is No Evil’.

The Best Film in the Encounters section went to ‘The Works and Days (of Tayoko Shiojiri in the Shiotani Basin)‘ by CW Winter and Anders Edström.
The Grand Prix of the Generation 14Plus International Jury went to ‘My Name is Baghdad’ by Caru Alves de Souza.