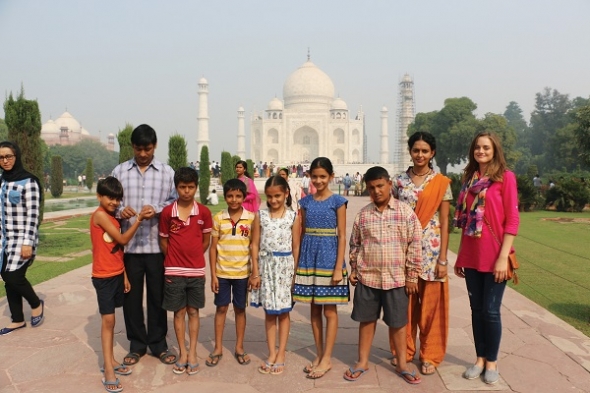 First unveiled at Cannes Film Festival in the India Pavilion, the film has a world premiere at LIFF…

IT’S THE CENTRAL gala film of the London Indian Film Festival – ‘T for Taj Mahal’ and could well become an audience favourite.

The nine-day festival opens this Thursday (June 21) in London with the Freida Pinto starrer ‘Love Sonia’.

It’s also rather poignant in that ‘T for Taj Mahal’ Indian producer Abis Rizvi tragically lost his life in the terror attack on a nightclub in Istanbul in the early hours of New Year’s Day last year.

It’s a heart-warming tale about an illiterate villager who opens a roadside café (dhaba) which leads to India’s most famous tourist attraction, the Taj Mahal.

Instead of the diners paying for their food with cash, our enterprising and socially conscious entrepreneur decides the tourists can help the children learn English instead of parting with their cash.

Literacy in the village, especially among the young, improves and the scheme is a great success but then a large corporate decides it wants a slice of that action and there is conflict.

There is a strong Western and Indian cast and includes Ali Faulkner (‘The Twilight Saga: Breaking Dawn’) and Pitobash (‘Million Dollar Arm’ and Subrat Datta (‘Talaash’) and Raveena Tandon (‘Dilwale’).

Last month, Sony and the team behind ‘T for Taj Mahal’ showcased the film at the Cannes Film Festival.

We were there and saw the trailer and it looked like a true story turned into an absorbing film with a powerful social message.

Director Khurana has worked in the charity and non-governmental sector in India as a filmmaker, so knows the terrain well and was first asked by Rizvi to direct what is his first feature film.

Watch Shay – from Sunny and Shay of BBC London94.9FM and BBC WM95.6FM Radio presenters, and LIFF ambassadors – talk to Khurana about his powerful tale of people making a difference at the margins.
Seen our video interview with LIFF director and founder Cary Rajinder Sawhney?