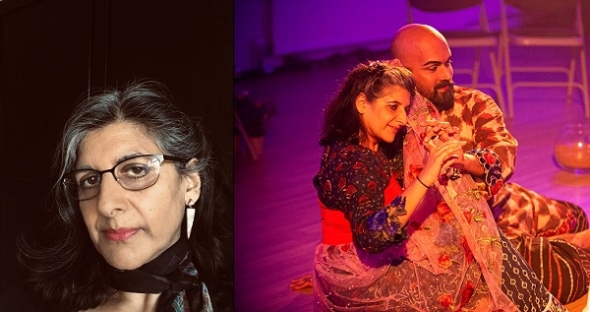 She told www.asianculturevulture.com: “I was actually quite shocked and then humbled and of course, delighted (when she told she was being made an OBE).

Prashar is at the forefront of sensory theatre, working with adults with learning disabilities and people living with dementia, as well as being CEO and artistic director of Spare Tyre theatre company until 2019. It is a pioneering theatre outfit created to educate and challenge prejudice and discrimination against those with disabilties and dementia and is an artist-led participatory theatre company which works with groups that are often marginalised, stigmatised or simply ignored.

Prashar is now a freelance artist, director and consultant and lectures at Rose Bruford Drama College on its collaborative theatre-making course and is also currently on the board of Creative Youth, a charity aimed at celebrating the creativity of young people, as well as the English Folk Dance and Song Society, a national development agency promoting folk arts.

These works focused on people living with dementia and disabilities and was a way of addressing issues as well as allowing those with conditions to find creative expression.

Prashar explained: “When we were doing the research, I heard someone in the care world say: ‘I don’t know how to communicate with someone with dementia’, and I found that very curious, because I thought we are fundamentally human beings, what is stopping you, as one human being to another, communicating with someone else?

“And that’s my curiosity – working with people with dementia was very similar to working with adults with learning disabilities, it was about how do you want to communicate with me?”

Her final work for Spare Tyre, ‘Love Unspoken’ ended in July 2020 and was addressed towards and about the Asian community and its elderly. It was a show aimed at showing love in all its forms and included participants who suffered from dementia, as well as their carers. It also looked at those who are no longer alive and the positive and profound legacy they often left – the theatre space was transformed with clothing, rose petals, cherished items, evocative smells and other trinkets and artefacts that were personal and tell a love story – accompanied too by narrative, music and dance. It premiered at the Queens Theatre in Hornchurch, Essex in October 2019 and involved members of Havering Asian Social Welfare Association.

Prashar worked with lunch clubs and cultural groups to produce ‘Love Unspoken’ and it also incorporated her experiences of making ‘Once Upon a Time’ and ‘The Garden’.

She said the latter work was inspired by the observation that many in care homes were often stuck indoors.

Hence she created ‘The Garden’ and took real worms into the production for authenticity.

“I took in real plants, real earth and we took in worms as well, I wanted to make sure they felt they were in a garden and were experiencing seasons.”

Asked about what she felt was her biggest achievement as artistic director of Spare Tyre, she told acv that she is proud of initiating one of the first paid internship schemes, as well as being a London Living Wage employer – in a sector where voluntary and unpaid time invested in productions occurs frequently.

“It’s about raising those standards slowly, so that’s why it’s very hard to pick just one achievement. It was constantly about how do we support, how do we raise standards,” she elucidated.

She feels that for theatre and the arts to be more inclusive and truly diverse, it requires strong leadership and support.

“There’s a still a way to go,” she said addressing the subject of Diversity. She thinks accessibility is a key part of getting wider participation.

“Having the will to do it. You certainly need to see the leadership change begin to happen and then you need that leadership to be supported.”

She is currently writing a research paper to do with arts and ageing and looking into what this means for the Asian community and is co-authoring this with Elizabeth Lynch, an arts advisor and researcher.

Her entry into theatre was through Tara Arts and admits a creative career wasn’t really on the agenda when she was young.

“It wasn’t on my horizon at all. I just stumbled across a community organisation at that time, which happened to be Tara Arts, which is now Tara Theatre. My political awareness grew overnight and I thought this is really interesting, I think I want to be doing more of this. I knew very early on that I wanted to be in the area of community arts and that’s largely where my work has been.”

Prashar was named in the New Years Honours of 2022 and the list was published on New Year’s Eve this year. To see the full overall story…