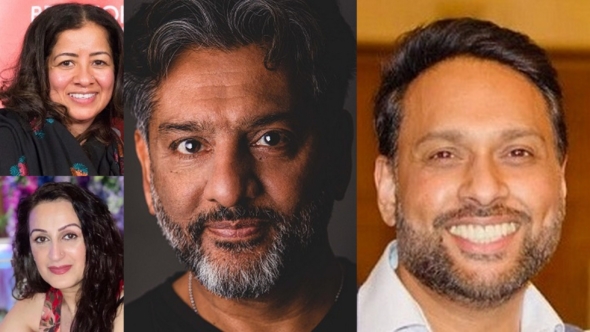 SEVERAL figures from the arts and culture world have been recognised in this year’s New Year Honours List.

Actor Nitin Ganatra is the recipient of an OBE, while theatre director Pravesh Kumar has been awarded an MBE.

The two women founders of Bradford Literature Festival, Symia Aslam and Irna Qureshi have also been recognised with MBEs

The festival was founded by the two writers in 2014 and is one of the largest cultural events of its type in the country and now routinely attracts thousands and has many star authors and poets appear at the festival. More than half of its audiences identify as being from ethnic heritages.

Aslam, chief executive officer and artistic director of the festival, acknowledged the honour and thanked the many people who had helped her and Qureshi establish the festival.

“The recognition in the New Year honours list for myself and Irna Qureshi, as founders of the Bradford Literature Festival (BLF), for services to literature and to heritage respectively, is a tremendous accolade for the work of the festival. The city of Bradford and its people have been the inspiration for BLF’s innovative programmes of exceptional arts and culture; international in outlook, with roots firmly planted in the heritage of Yorkshire.

“Audiences from all over the world have joined local people who have supported the festival with a passion since we started in 2014 and this honour is both for the festival and the city.

BLF is for everyone and at the heart of our work are policies that ensure all people have access to and feel included in events. Our pioneering ‘Ethical Ticketing’ policy ensures events are free for people who otherwise would not be able to afford to attend arts and cultural activities.

This honour is recognition for the work of many people who have backed the Festival. My thanks go to the city of Bradford and all our tremendous funders and partners who enable this work to take place; to the wonderful team and writers of every genre who make the magic happen. I am immensely grateful and deeply touched and look forward to taking the festival to new heights.”

Ganatra and Kumar recently worked together on a comedy lockdown series called ‘Leave the Plastic on’.

Ganatra is best known for his role as Masood, the postie in the long running BBC soap, ‘Eastenders’, but the actor has a long and successful career across stage, film and television. His return to the theatre in 2018 after a long hiatus in ‘End of the Pier’ drew rave reviews and signified his versatile talent.

Kumar is the founder of the Rifco Theatre Company and remains its artistic director. This year, the company marks 21 years since it was created in Slough and now has a permanent residency at Watford Palace Theatre.

Kumar said: I grew up looking at Windsor Castle in the distance from bedroom in Slough, this feels like a dream. I am delighted to be recognised for my work and be in such esteemed company on 2022 Honours List. I have been making British Asian focused theatre for 21 years now and I feel blessed to have worked with such amazing creatives and actors.

“Our community rarely wants to talk about the serious issues and I realised that the only way to connect was through making the conversation accessible through entertainment and really open the doors to theatreland for a whole new audience.

“We’ve come so far as a community in this country and I think it’s important to continue hold up a mirror to society and tell those untold stories.”

Pioneer black filmmaker Horace Ové was knighted – in recognition for a long career in filmmaking which started in the 1970s and saw him credited as the first black director of a British feature film. More on Sir Horace here.

Creative freelance producer Arti Prashar was awarded an OBE for her work in the arts working extensively with people who have dementia and or learning disabilities and has now spoken to us about 19-year career. Read that here.

Among the other prominent recipients are broadcaster Trevor Phillips who becomes a Sir; while actor, broadcaster Joanna Lumley becomes a Dame as does thespian Vanessa Redgrave.

While others honoured are Sara Khan, the counter-terrorism commissioner who becomes a Dame; paediatric cardiology profession Ahmed Qureshi, has been handed a knighthood; crossbench peer Lord Ajay Kakkar, is another knighthood awardee, and Professor Kamlesh Khunti, professor of primary care diabetes and vascular medicine at the University of Leicester has been given a CBE.

A number of scientists and doctors have been honoured for their roles in managing the covid pandemic crisis, among them Professor Chris Witty and Patrick Vallance both become Sirs.