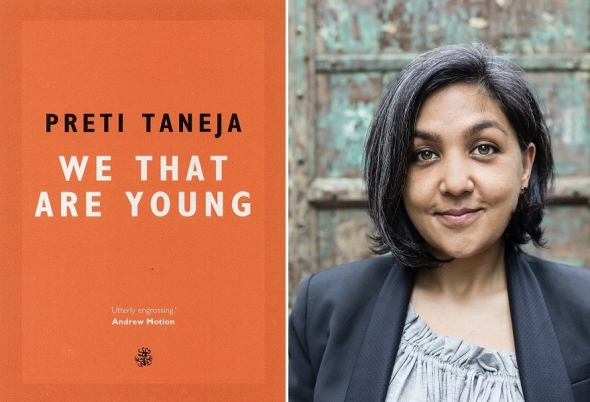 Did you know India has not only one of the world’s biggest populations but among the youngest as well? It’s a factor that has a bearing on debutant novelist Preti Taneja’s much acclaimed (already) ‘We That Are Young’. She talks to www.asianculturevulture.com about some of its themes and what inspired her – ahead of acv’s and globooks’ An Evening with Preti Taneja at Waterstones Piccadilly next week…

www.asianculturevulture.com (ACV): What was the inspiration for writing ‘We that are young’? How much did Shakespeare’s ‘King Lear’ come to bear on it? Can you say something about the title please?

Preti Taneja (PT): Shakespeare’s ‘King Lear’ is a strand of DNA in ‘We that are young’. I feel like the idea has been with me since I was 17, studying the play for my A levels. Act One Scene One, in which a father asks his daughters to perform their love for him, felt very similar to how Indian daughters are often expected to perform perfectly, at school or at home, to uphold family honour and pride. The idea never went away and I picked it up in 2010 when I started the book. By then it was the colonial links of Shakespeare to India, the themes of rich and poor, the gender politics and the exploration of power, kingship, freedom and mortality that I wanted to draw on.
The whole novel closely follows the plot of ‘King Lear’, right to the end – where the Dover Cliffs of the play is modern day Kashmir. The title is taken from the last lines of the play – ‘We that are young/ Shall never see so much nor live so long,’ and for me speaks to the fact that India has one of the largest populations of young people in the world; those lines made me decide to tell the story from the perspective of the three daughters and two sons the play gives us.

ACV: How easy or difficult was it to get your first novel published? You had an award-winning novella published before?

PT: ‘Kumkum Malhotra’, my novella, won the Gatehouse Press new fiction prize in 2014, but it was a story I wrote in 2010.
Readers I showed it to liked it, and I used the style I worked out in it as a blueprint for the sections of ‘We that are young’. Drafting, the hardest part of writing, came later – and it went on for a long time – repeatedly. Andrew McDonnell at Gatehouse Press knew I had finished a novel, and that mainstream London publishers had passed on it.
So, he took the ‘Jeet’ section of ‘We that are young’ in manuscript form to Elly and Sam at Galley Beggar Press (who are publishing ‘We that are young’) – he literally went round to their house one evening with a print out of it.
Elly and Sam asked to see the rest, and then they bought the book. I had an agent at the time, but the deal was done outside that.
I switched agents after I sold the book and am now with David Godwin Associates alongside some of the best Indian writers working in English in the world, which feels pretty amazing!

ACV: Who are the writers you have been influenced by? Have you always wanted to be a novelist?

PT: Fiction has always seemed the highest of literary arts to me. It’s something I’ve worked towards – it certainly didn’t come easily.
Reading plays a huge part in my life – and I read everything from chick-lit to fiction in translation, which I love. Writers I’m influenced by are the ones who tell it straight, and often from points of view that challenge readers to work harder: Jean Rhys, Anaïs Nin, JM Coetzee, Claudia Rankine, Saadat Hasan Manto, Clemens Meyer, Mahashweta Devi, Svetlana Alexievich, Paul Beatty.

ACV: Is it a feminist novel, are you happy to describe it as such (some don’t like labels, some the term itself)? Do you feel tackling gender relations (patriarchy) is important to understanding the writing and your story…

PT: Yes (– why wouldn’t I be?!) One of the main starting points for the book was Professor Wendy Doniger’s definition of ‘alternative people’ or ‘others’ in mainstream Hindu society.
In ‘Hindus: An Alternative History’ she writes that they are ‘people who, from the standpoint of most high-caste Hindu males, are alternative in the sense of otherness, people of other religions, or cultures, or castes, or species (animals) or women,’ groups that are silenced in the mainstream.
I wanted to explore those lives, and that power dynamic in the book, and in that sense, ‘We that are young’ is a feminist novel.
The way I explore gender relations has its roots in Shakespeare’s play, with many of Lear’s curses finding echoes in Indian sacred texts. First and foremost, the book is deeply critical of how women and ‘others’ are circumscribed and subjugated in India – in ways that often seem to be getting worse. King Lear finishes on an uneasily ambivalent note – and that sense of what might happen next is one that I wanted to saturate my book with.

Preti is a Leverhulme Early Career Reseach Fellow at Warwick University working in the department of English and Comparative Literary Studies, and the Centre for Human Rights in Practice until 2020.

Join us for more when Preti Taneja will talk about her book in more depth with Sailesh Ram, editor of www.asianculturevulture.com at…

*Please note the book will not be available to purchase on the evening and ticket price has been reduced accordingly, please see…apologies and thanks.