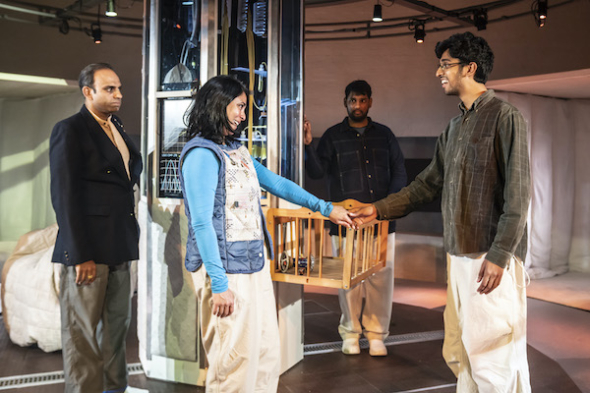 Doctor Who writer delves into space to explore uncertain future…

LEANING on an image of his grandmother being the commander of a spaceship and setting forth – writer Vinay Patel has reimagined the Chekov classic play, ‘The Cherry Orchard’ – he tells www.asianculturevulture.com

The family drama has been transported to the future and several generations have survived successfully. They have long left earth and then they find a planet on which they can step off their permanent home or can they?

In this interview, Patel talks about what inspired him to take this early 20th century Russian classic and turn it upside down in space and centring a South Asian family and community at the heart of it all.

Perhaps, ‘turn it upside down’ is not absolutely accurate – for there are many characters and situations anyone who has seen ‘The Cherry Orchard’ will recognise in this production, which is currently showing at The Yard in Hackney, east London (see listings below) and then transferring to the larger audience capacity Home theatre in Manchester.

It’s a hugely ambitious production with an all Asian cast – and Patel’s writing has great pathos and weight – as does Chekov’s obviously (and why it remains an enduring classic).

In the interview (below), Patel opens up about the links he drew between the original’s politics and the here and now.

Chekov penned this in 1903 – sometime before the bloody and violent Russian Revolution of 1917, and Patel talks about how the landed gentry are mostly immune to the suffering and deprivation around them and similarly in the spaceship, those on the control deck are oblivious to what is going on down below (or how ‘the downdeckers’, as they are referred to in Patel’s version are actually coping).

It’s a brilliant production from a technical point of view – the small space at The Yard is well used, the revolving stage and distant images of the galaxy give it all a far-away, far-off, ethereal feel.

Talking to Patel, it is clear too that immigration and the physical part of that journey is important too and affects the psyche of those who undertake it – and there is a generational legacy – a sacrifice (and trauma) that bears fruit (or pain) perhaps only a generation or two later.

This is ambitious theatre and both Home, English Touring Theatre (ETT) and The Yard should all be applauded for taking it on and delivering on this. We need works like this, that reimagine our creative world in a new idiom and format – and help us to throw light on the world we inhabit right now.

Some will still need to ask the blunt question – does it work – this Chekov in space?

Yes, personally, it does, but for some, the sheer audacity and bravery – in a purely theatrical sense only – might be too much – an overextension of what sounded like a great idea – but fails in the execution.

We don’t think that – but it is a demanding production, without the fallback of a classic many people come simply to enjoy as a gentle social comedy with only an element of pathos and tragedy.

Directed by James Macdonald, the production dips for short periods, and it’s important to hold the central idea of survival somewhere in your head and appreciate the magnitude of what this family are trying to do – stay together and continue in the manner in which they have been accustomed.

Patel’s recasting seems more intense, intellectual and ultimately political: the seeds of our downfall are all around us but we are not looking, not learning and like the family in the spaceship simply ploughing on without realising there are parts of our existence structurally that are almost in state of collapse… and yet we miss the signs.

We won’t go any further on this, suffice to say, don’t go to see this without your brain actively engaging with it… for therein lies its power and its rather beautiful pathos.
Acv rating: ***1/2 (out of five)