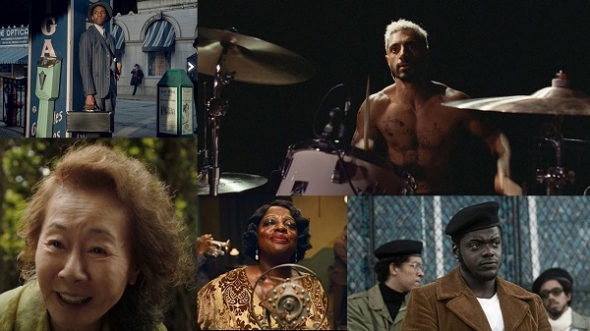 PEOPLE OF COLOUR recently swept the board when it came to acting gongs at the Screen Actors Guild (SAG) Awards – will there be a repeat at the Oscars?

Brit Daniel Kaluuya won the SAG Award for best male supporting actor for ‘Judas and the Black Messiah’, while Yuh-Jung Youn won the SAG female supporting actress category for her role in ‘Minari’. The SAG awards took place virtually on Sunday (April 4). Kaluuya is also up for an Oscar in the Actor in a Supporting Role alongside Sacha Baron Cohen (‘The Trial of the Chicago 7’), Leslie Odom Jr (‘One Night in Miami’), Paul Raci (‘Sound of Metal’) and fellow actor Lakeith Stanfield (‘Judas and the Black Messiah’).

Both Kaluuya’s and Youn’s films are about the minority experience – the former is based on the US Black Panthers movement of the 1960s as black political consciousness grew, while ‘Minari’ tells the story of Korean immigrants who settle in the Midwest of rural America.

Adapted from an August Wilson play, the film tells the story of blues singer Ma Rainey and the tensions between her and her band members – Levee Green, among them, played by Boseman – and her white management in this 1927 period piece.

Davis appears in the Oscars list for Actress in a Leading Role and is up against Andra Day (‘The United States vs Billie Holiday’), Vanessa Kirby (‘Pieces of a Woman’), Frances McDormand (‘Nomadland’) and British Carey Mulligan (‘Promising Young Woman’).

Many see the SAG Awards as something of an indicator of what might happen at the Oscars on Sunday, April 25.

This year’s awards will be a partially virtual ceremony and will take place at Union Station Los Angeles, the town’s central railway hub and the traditional Dolby Theatre in downtown LA.

Broadcast live on ABC TV in the US, you can watch it in the UK on Sky Cinema and Now TV – and in more than 225 countries.

The show is being produced by Jesse Collins, Stacey Sher and Steven Soderbergh – director Glenn Weiss will direct. He has helped to direct five previous Oscars and has also been involved in the Primetime Emmy (For US TV mainly) and Tony (for US theatre) award ceremonies as well.

“Our plan is that this year’s Oscars will look like a movie, not a television show, and Glenn has embraced this approach and come up with ideas of his own on how to achieve this.

“We’re thrilled to have him as part of the brain trust,” said Collins, Sher and Soderbergh of Weiss.

Experienced US co-producer Raj Kapoor (‘The Wonderful World of Disney: The Little Mermaid Live!’ ‘Mariah Carey’s Magical Christmas Special,’) is among a 14-strong team helping to make the show.

A lot of www.asianculturevulture.com’s interest will centre on Wembley, London’s Riz Ahmed’s first ever Oscar nomination for his leading role in the film, ‘The Sound of Metal’. Ahmed goes up against Boseman in the Best Actor in a Leading Role category. The pair are also up against Anthony Hopkins (‘The Father’), Gary Oldman (‘Mank’) and Steven Yeun (‘Minari’).

Ahmed has been talking about his role as Ruben – a heavy metal drummer whose life is turned upside down as he discovers he is losing his hearing. The film drops for the first time in the UK on Amazon Prime on Monday (April 12).

The film immerses you in Ruben’s world, using the lack of sound to get inside the young man’s troubled head and makes the viewing experience all the more powerful. Ahmed is intense and is pretty much in every scene and really does give the performance of a lifetime. ACV reviewed it when it came out (see link here or below).

His girlfriend in this film is Lou, played by British actress, Olivia Cooke, and she is best known in the UK for her role in ITV/Amazon’s seven episode remaking of Victorian novelist William Thackeray’s ‘Vanity Fair’ (2018).

ACV was privileged to see ‘Sound of Metal’ at its world premiere at the Toronto International Film Festival (TIFF) in 2019 and was able to talk to both Ahmed, fellow actor Chelsea Lee and first-time narrative feature director Darius Marder.

Most seasoned observers are tipping Boseman to clinch the trophy but this is unlikely to be Ahmed’s only nomination and follows his 2017 Emmy win for the HBO eight-part blockbuster drama, ‘The Night of’ first screened a year earlier.

There was some Indian interest this year when the film ‘Bittu’ was nominated in a short film category after breaking through initially as an Oscar student film. It has screened at many international film festivals last year and acv saw it at London Film Festival 2020.

The 17-minute narrative feature is centred around a young girl called Bittu, brilliantly reprised by Rani Kumari. It did not make the eventual Oscar shortlist, but writer-director Karishma Dev Dube is one to watch.

Her film is a potent reminder of how cutting corners can lead to a tragic loss of life. The film is based on the real-life tragedy of some schoolchildren being accidentally poisoned in Bihar, eastern India.

‘Bittu’ relocates the story to a Himalayan community.

ACV caught up with Dube, who is based in New York and is a graduate of New York University’s film programme, just before the final shortlist was announced.

To find out when you might be able to see ‘Bittu’ – please go to https://www.facebook.com/bittushortfilm/