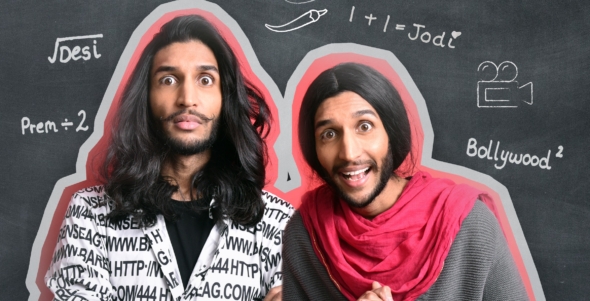 Known as ‘Koki’s Desi Gyaan’, (gyaan meaning knowledge), it will feature the British-based Gujarati Kokila Ben and her son (Parle in character) discuss a film or show that is currently featuring on Zee 5 – the digital of arm of the multi-national Indian broadcaster, Zee.

Koki often lectures Parle about Indian, Hindu and Gujarati culture (there will be English subtitles) – as someone who is born in the west and whose outlook is more shaped by what is immediately around them and mainstream and youth culture here (in the UK/Europe).

“It’s really very exciting,” said Parle Patel. He told www.asianculturevulture.com: “It’s when you watch an Indian film or show and someone like Kokila has to explain the what it is about, and takes it upon themselves to school you.”

Patel told www.asianculturevulture.com that Zee 5 has given him free reign and that he can cover anything from an array of content that is on Zee 5 presently.

The show will drop on Zee 5’s European Instagram account (see link below). Snippets and trailers for the show will appear on Parle’s own social media channels, especially Instagram.

“It’s not just the latest films but shows, old films anything that you can view on the platform,” Patel explained. “Kokila Ben can roast anything she watches.”

The show starts weekly tomorrow and will be around five minutes and will initially run for three months.

Yesterday (March 31) Parle posted a video featuring Koki with the Parle character dancing at home and his mother telling him off for dancing inappropriately to such a song at home.

“It’s all about being schooled and about the generational differences,” Parle told acv.

The show comes off a year of growth and further development for Parle, who is probably best known for his Youtube Channel, Planetparle (see link below), where he makes comedy skits centred around a number of different family characters – with Koki (Kokila Ben) now getting her own spin-off.

“During lockdown, my numbers have doubled – a lot more people are online and watching,” Patel told acv. He has nearly 45,000 followers on Instagram currently.

Patel has also recently helped to make documentaries for the BBC and his latest ‘Being Hindu’ – is part of a series exploring religion in Britain – screened for the first time on BBC One on Monday (March 29).

He was assistant producer and narrates the programme that looks at how Hindus practise their faith in modern Britain. He has also made a BBC documentary on caste, ‘Hindus: Do we have a caste problem?’ broadcast in February 2020 on BBC One.

“I’d like to film more,” said Patel, who like many Youtubers is just as comfortable working behind the camera and editing, as he is in front of it performing. “But with lockdown and restrictions, it isn’t so straightforward.”

He has been busy during lockdown in the UK, making his Youtube shows, documentaries and connecting with the Indian and Gujarati diaspora. He has a weekly Instagram Live with his followers on the platform. He also often comperes shows, and has made music videos, choreographed, and is one of the UK’s best-known British (Gujarati) cultural ambassadors.

More recently, he was one of the stars in the successful musical and drama theatre show, ‘Mrs Kapoor’s Daughter’s wedding’ – which had been touring the country and was first staged in 2018 and saw Patel essay the role of ‘Mrs Kapoor’.

Last April, he also hosted an online Spring Navratri event, as the world went into lockdown effectively and in the better-known Navratri last October, he composed his own music and garba (traditional Gujarti folk dance) with Pritee Varsani – whom he often collaborates with on music projects.