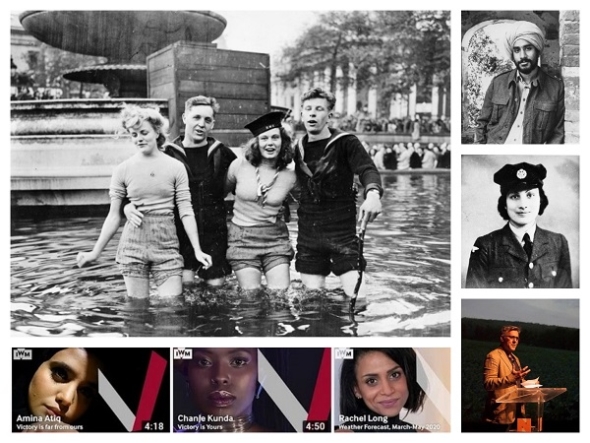 As the UK commemorates the 75th anniversary of VE day (Victory in Europe Day), today – the day the Second World War ended in Europe, it is an event marked by celebrations (much scaled back though by the ongoing Coronavirus pandemic), acv looks at contemporary contributions marking VE Day, and also how the Indian war contribution has been represented in popular culture…

FIRST up, you can pop over to the website of the Imperial War Museum (IWM), which has a lot of information about the actual event itself, and it has just launched a four minute soundscape, ‘Voices of War’, from their sound archive that brings together oral testimonies of how people on that date reacted to the news.

Alongside this, the IWM also commissioned five artists to respond to the anniversary and focus on what this means in today’s context.

The artists are poet, Daljit Nagra (inaugural Poet-in-Residence for Radio 4 & 4 Extra), whose poem, ‘Coming to Terms with Victory’ talks about how his Punjabi ancestors fought in the World Wars and what drove them to fight. The other artists are DJ, poet and writer Charlie Dark, founder of Run Dem Crew; Yemeni- Scouse writer, performance artist, facilitator and activist Amina Atiq; poet Rachel Long, leader of Octavia, a poetry collective for women of colour; and poet, playwright and performance artist Chanje Kunda. These audio pieces and other resources are available for free on IWM.org.uk/victory and can also be viewed on the museum’s Youtube channel 👇

Talking of Punjabi ancestors, fighting in the World War 2 (WW2) , one film conveys that most sensitively is the award winning, ‘The English Patient’ (1996), which featured actor, Naveen Andrews as the sapper, ‘Kip’ (Kirpal Singh) a man who defuses bombs and landmines, working for the British army as a lieutenant. There is a lovely scene when he meets ‘Hana’, (Juliette Binoche) — the nurse looking after the burnt pilot (Count Laszlo de Almásy and played by Ralph Fiennes) – she is playing the piano and you can see it below 👇

*SPOILER ALERT* These two begin a love affair, but Kip is also a deeper symbol of relationship between colonials and colonised.

Directed by Anthony Minghella from the novel of the same title by Michael Ondaatje, this romantic war drama scooped nine Oscars including Best Picture and Best Director in 1997, as well as three further nominations.

Other war movies you might also enjoy are ‘Casablanca’ (1942) and ‘Rangoon’ (2017) by Vishal Bharadwaj or the bio-pic, ‘Netaji Subash Chandra Bose:The Forgotten Hero’ (2004) by Shyam Benegal.

An enduring feature of war movies is spies and I recently enjoyed watching the film, ‘Odette’ (1950), a true story about the French, Special Operations Executive (SOE) agent, Odette Sansom who was captured by the Germans in 1943 and sent to Ravensbrück Concentration Camp and survived. She was given the George Cross while still alive.

Another woman who deserves more recognition is Noor- un-Nissa Inayat Khan, who also served in the SOE. Daughter of a prominent Muslim Sufi, Inayat Khan, and an American mother, Ora Ray Baker, Noor (code name Madeleine) was the first female wireless operator sent to occupied France, but was captured after being betrayed and executed at Dachau Concentration Camp.

She was given the George Cross posthumously. She was the subject of a PBS docu-drama, ‘Enemy of the Reich: The Noor Inayat Khan Story’ (2014) with the role being played by Grace Srinivasan.

Author and professor, Dr Yasmin Khan also wrote an amazing book, ‘The Raj at War: A People’s History of India’s Second World War’ which gives you the many voices of the ordinary Indians from the nurses, road builders, servicemen – and many others, whose lives were impacted by the war.

In the British Asian theatre world, the play, ‘Moonlight Sonata’, is a tribute to the 4th Indian Division who fought at the Battle of Monte-Cassino. Written by Jez Simons and Joyti Patel and directed by Topher Campbell the play ran at the Lyric Theatre, Hammersmith from in 1996.

Last but not least, is ‘Farthest Field: An Indian Story of the Second World War’, a book by journalist, Raghu Karnad (Winner of the 2019 Windham-Campbell Prize for Non-fiction), son of the late Indian writer, Girish Karnad.

Here he is at Mysuru Literature Festival discussing his book with Air Marshall Nanda Cariappa and where he says the book is about his maternal grandmother’s family – “her generation, growing up in Madras” , when his mother mentioned someone called “Bobby had been my grandmother’s brother, he was in the Second World War”. This sets him on a path to unravel the mystery of a photograph of three young men who are friends and all go to War. You can hear him talk more about the book and the prize here in a talk with Manjula Narayan, books editor of the Hindustan Times.