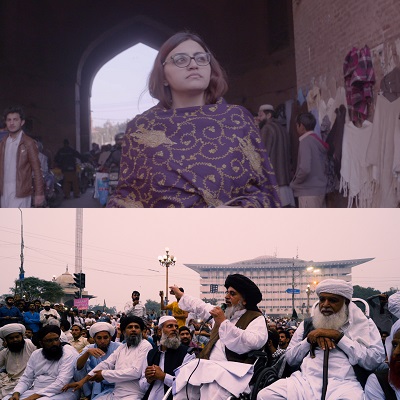 NB: Note this story was originally published on Monday, March 2 and republished tonight because of changes on the acv server… (dates have not been changed in the original story).

BBC Storyville looks at the controversial blasphemy law in Pakistan

ASIA BIBI is back in the news and a BBC Storyville programme tonight (March 2) explores the wider subject of the controversial Blasphemy law in Pakistan.

Bibi, a Christian woman labourer, was accused of blasphemy by her Muslim work colleagues – she has always denied the central charge and has more recently spoken warmly about the country, while being critical of the blasphemy law.

She was initially sentenced to death but then a decision not to go ahead with the case and set Bibi free was upheld by the Supreme Court (SC). Bibi was spirited away from the country following the SC ruling.

She is currently in exile in Canada, but met President Emmanuel Macron of France last week and indicated she wanted to live there.

There are interviews with the those involved in Bibi’s case but the film’s strength is the way it explores the blasphemy law in depth and looks more widely at the how the law functions and covers both its fervent supporters and detractors.

Naqvi has made political films before – and this is no different – though unlike in his more recent ‘Insha’ Allah Democracy’, he does not appear in the documentary himself and there is no light relief or gentle comedy (mostly provided in that by former Pakistan President Pervez Musharraf who seized power in a military coup.)

There is a central figure in ‘The Accused’ – cleric Khadim Hussain Rizvi; he is the main focal point of opposition to any changes in the blasphemy law.

Naqvi’s film is very even-handed and doesn’t take sides but Rizvi is at one end of the argument, while some like Gulalal Ismail is at another. The women’s and human rights activist became a target for some because she has investigated cases where some accused of breaking the law were beaten and even murdered.

Perhaps startlingly and what is very powerful about Naqvi’s film is that these victims are Muslim themselves – their religion and faith (unlike Bibi’s) are never called into question.

The film looks at university student Mashal Khan who was murdered after he was accused of contravening the law on blasphemy.

In essence, Navqi’s film is a highly informative and brave contribution to ongoing debate within Pakistan about its political direction.

On the surface, this film may look like it is about religion and certainly that is what Rizvi and his supporters want to make clear.

Naqvi in London last week talked to www.asianculturevulture.com about ‘The Accused’.

“Pakistan is still a fledgling democracy, and there is a lot of outside interference and there are voices that are pushing back and fighting back and those are the stories we don’t necessarily get to see and they are Muslims,” Mohammed Naqvi told acv.

“It’s so important what I wanted to do was amplify those voices and bring my country back.”

Perhaps, arguably, to the way its founder Mohammad Ali Jinnah had envisioned but that idea of Pakistan has taken a battering in more recent times and global forces have not helped.

Naqvi is critical of the way much of the western mass media always highlights cases such as Asia Bibi and does not look any wider.

“It’s not just a religious issue,” Naqvi pointed out. “We have seen them only cover Christian stories (in blasphemy cases), it (the blasphemy laws) have been used against Muslims.”

You could say it is being misused to stifle challenges to authority or even a positive push towards women and minority rights.

“I’d be the first one to say minorities are being persecuted,” said Naqvi, wishing to illustrate the complexity of the situation. “Some people are very intolerant.”

Naqvi feels importantly too there are progressive voices in Pakistan and there is some hope that the nature of debate can be widened.

“Things have started to shift a bit in Pakistan; it was the Supreme Court itself that set Asia Bibi free – so give credit, where credit is due.

“Discussing it is rational – and I want people to be comfortable at least engaging and talking about laws, but even that is a big step,” Naqvi urged.

In some parts Rizvi does comes across as a firebrand and a fundamentalist, but he is also charismatic, charming and publically respectful of minorities and does not bad mouth them, openly.

The film shows how he has built a political base and is now fighting elections – and while they do not enjoy a lot of electoral support currently, it wasn’t so long ago that Imran Khan’s party Pakistan Tehreek-e-Insaf (PTI) was a minor political party. In the summer of 2018, Imran Khan won a landslide victory and became prime minister.

Naqvi hadn’t intended to make a film about this subject but after the events of 2016 and the controversy surrounding the Asia Bibi case, he agreed to make a film for the BBC, worried by the turn of events and the backlash against the SC decision.

“We are allegedly a democracy essentially, and now we are kowtowing to this essentially bigoted militant – that is when I said, no way, am I going to allow this man to control my country and speak on behalf of all Muslims and use my religion as a political tool – which is what he is doing.”

Powerful stuff – well worth watching if you are interested in how politics and religion are increasingly playing out on the subcontinent.

https://www.bbc.co.uk/programmes/m000fzpl (UK only) and the film is set to enjoy an international film festival run from this month…