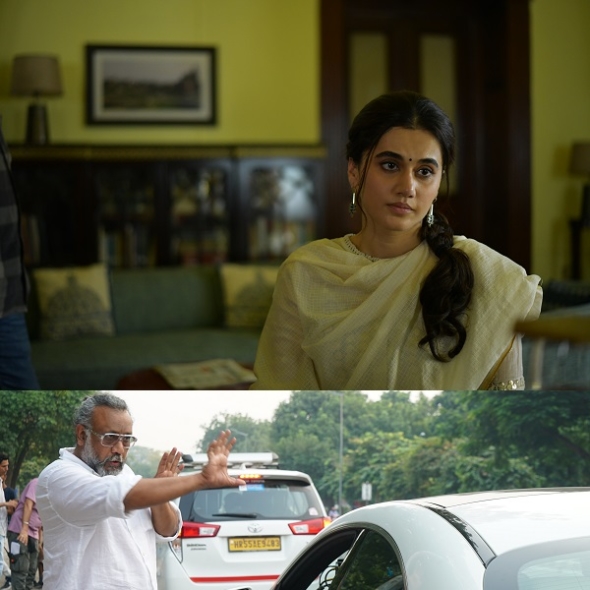 NB: This article was originally published on February 29 and reloaded on the date indicated because of a technical hitch in a server switch

MUCH has already been written about ‘Thappad’, Taapsee Pannu’s lead role in the film, as the woman slapped and director Anubhav Sinha’s drama about a marriage falling apart because of that slap.

While www.asianculturevulture.com hasn’t seen the film, Sinha did find the time to talk us about it and some have already declared to be a defining moment for Indian cinema (the iconic screenwriter and poet Javid Akhtar no less). Acv readers and others in the UK will know Sinha from his appearance here for the opening of his last film – ‘Article 15’.

The rather dryly titled film dealt with explosive caste inequalities in India and opened the London Indian Film Festival last June. Article 15 refers to that part of the Indian constitution that forbids discrimination on the basis of caste. Theory and laws are one thing, practice quite another, and Sinha’s film did well both commercially and critically.

Sinha talked to us then too about the trilogy of films he has made all with strong social messages: there was ‘Mulk’ in 2018, in which he tackled religious discrimination in India – a family is falsely accused of harbouring someone with extreme views who is accused of engaged in terrorist activity; then ‘Article 15’ and now ‘Thappad’.

What is powerful is that Sinha tackles tough subjects (and unlike a lot of Bollywood) is prepared to confront them, honestly and sincerely. He isn’t reading the runes and making films to ride a particular zeitgeist – no, this is raw in some ways, but also extremely accomplished and skilled.

He wraps these subjects in entirely human, credible and relatable stories and consequently the issues are amplified but there is a level of nuance and complexity that does justice to the subject.

“There’s a fair bit of patriarchy that is embedded in it,” said Sinha to www.asianculturevulture.com on a slightly crackly phone line to Mumbai. “And that’s something I have an opinion on and I thought some day I would hit upon a story idea and that’s how this film happened…”

It wasn’t easy – he said speaking to us on Wednesday (February 26). He co-wrote the film with Mrunmayee Lagoo (to give the female perspective, according to Indian media).

“This was a difficult film overall to cast and shoot. There was a certain sensitivity. In certain films it’s very difficult to translate some emotions,” he told us.

It helped that he had Pannu in the lead role.

“When I conceived the film she was sitting right next to me and I told her about it and she said you cannot do this film with anyone else.

“Without being biased, she has done a fantastic job.”

So, say many of the critics. Pannu started out in indie Indian cinema and previously worked with Sinha on ‘Mulk’. ACV saw her close up in Toronto in 2018, when ‘Manmarziyaan’ enjoyed its world premiere there. Pannu played a modern young Punjabi woman faced with distinct choices – marry the steady, loyal, respectable NRI banker, ‘Robbie’ (Abhishek Bachchan) or the punkish, passionate, rebel musician ‘Vicky’ (Vicky Kaushal’).

Pannu has undoubted star quality – even if she decries her ability to open a film in a way that a traditional Bollywood star might – early box office from yesterday (February 28) showed a modest opening and analysts expected better today and tomorrow as the film started picking up through word of mouth.

The last big film with a strong social message and a star at the heart of it was ‘Chhapaak’, featuring Deepika Padukone didn’t do the numbers people expected of it.

The filmmaker had enjoyed four special screenings with other film creatives ahead of ‘Thappad’s‘ release yesterday and it has helped to build momentum and has furthered the idea this is not a routine Bollywood release.

Sinha is sceptical as to whether films can bring about social change – but perhaps intimates they can create the environment for change.

Like in much, if not all the world, the woman will be the one more scrutinised and criticised readily for the breakdown in a relationship.

Sinha admits to using the slap and the incident of domestic violence as a way to explore deeper themes in any husband-wife, man-woman relationship.

“I am really hoping to slide in some questions which you will deal with on your own and have your own take on the questions that the film poses,” said Sinha.

It definitely makes Bollywood a more interesting arena and if we heard him absolutely correctly, his next film will be about Kashmir.

‘Thappad’ is out now, to see in the UK