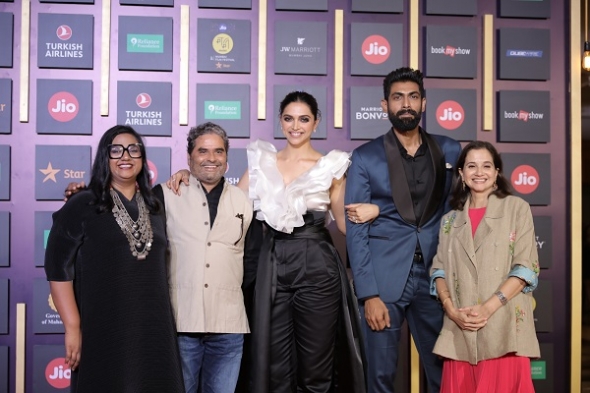 INDIAN filmmakers are increasingly exploring a different type of filmmaking to conventional models.

More are working in the area of ‘fiction documentary’ (not to be confused with docudrama).

This type of filmmaking is a hybrid form that has both aspects of traditional fictional narrative, where everything is made up and documentaries where the subjects are real people.

Almost 50 per cent of the films screened at the Mumbai Film Festival (produced by the Mumbai Academy of Moving Image – Mami), which closed on Thursday (October 24) with a ceremony, presided over by Bollywood superstar and Mami chair, Deepika Padukone – could be classified in this way.

Perhaps the best of example of ‘documentary fiction’ seen by www.asianculturevulture.com during the festival was director Gurvinder Singh’s latest film, ‘Bitter Chestnut’.

Singh has been on a four-year journey – best known internationally for ‘Chauthi Koot’ (‘The Fourth Direction’, which premiered at Cannes in 2015), he said this developing form had been borne out of a flexibility and imagination rather than by design – the budgets to make these types of conventional narrative films can be big, encouraging Indian filmmakers to look at different approaches in how to tell their stories.

His film, shot in the Himachal Pradesh village of Bir in the foothills of the Himalayas, uses non-professional actors and real people to tell a story of a quiet conflict between the big city life and all its allure and pitfalls, against the tranquillity and scarcity of a village like Bir. On a sad note, the village café which plays a significant part in the film belonged to his sister who passed away just before filming began – and she would have featured had she lived.

“Indian independent filmmakers are currently particularly interested in their own history or ethnography – with the country’s large number of regions and different traditions that can surprise even those living in India,” said Singh.

His film had its first Indian screening at Mami and premiered at the Busan International Film Festival in South Korea earlier this month.

Actor Tannishtha Chatterjee, whose first film as a director, ‘Roam Rome Mein’, also premiered at Busan before coming to Mami, also commented on the rising genre in India itself.

Her film shares certain features with documentary fiction, but is based on a real life incident – which she disclosed to acv in Cannes earlier this year, as the film was still being edited. The story is about a young woman from Delhi (played by Chatterjee herself), who escapes from a patriarchal-violent father to Italy to live with freedom. Her brother (portrayed amazingly by Nawazuddin Siddiqui), who used to enjoy all the privileges of a boy and man growing up in an Indian family, follows his sister only to find a way to understand her better.

She said that this genre – clarifying her film is more fiction than anything else – fiction documentary – is one India appears to be embracing.

“Indian filmmakers are interested in creating their own forms of artistic expression, as it is not always necessary to follow western cinema,” she declared.

Acv also saw the film ‘The gold-laden sheep and the sacred mountain’ at the London Film Festival earlier this month and that too is almost a fiction documentary – it features non-professional actors in roles close or exactly the same as their real life personas.

Acv found this sad and funny at the same time.

It is about how the Indian government decided to ban the use of captive langurs – the natural enemy of macaques to keep them at bay; the lack of a foe led to a proliferation of macaques, who then created a nuisance in urban neighbourhoods. In order to protect the Indian capital from the monkeys without the help of langurs and at the same time pay respect and reverence to the ‘sacred animal’, the government created a new role – that of a monkey repeller.

Young men have to be trained to mimic the sounds and actions of aggressive langurs to repel the hordes of macaques. The film follows the journey of one boy, who takes on this task. Shardul Bhardwaj won the best male actor gong for his role as the monkey catcher.

Gitanjali Rao’s ‘Bombay Rose’ clinched the second spot in the India Gold category just behind ‘Eeb Allay Ooo!’. The film screened at the London Film Festival this month and impressed acv. The award should herald a more conducive climate for animated features in India itself and encourage a new generation whose skills are already in demand abroad (as animators and VFX specialists who work on western films).

Padukone said she had learnt much as the chair person of the fest – despite confessing to seeing only one of the 190 films screened.

She paid tribute to the passion of festivalgoers.

She told the audience for the closing awards ceremony at the JW Marriott: “My takeaway from the experience was the audience, people were just passionate about cinema.

“Some related because they are aspiring directors, actors, but some of them just pure audience who are passionate about great movies.”

There were prestige events too hosted during the fest – Netflix celebrated Women in Films, Brazilian and American film directors Fernando Meirelles and Ari Aster, respectively, held master classes, with Meirelles also getting an excellence in cinema award following the screening of his latest film, ‘The Two Popes’; Mumbai’s Soho House hosted a party and the Italian Embassy in Mumbai organised a private dinner.

Franklin Leonard, the founder of The Black List (a website matching usigned scripts with directors) was among the notable international participants. See below more from our story about opening on this.

The festival is also known formally JioMamiwithStar after two of its principal sponsors, mobile phone company, Jio and broadcaster Star.