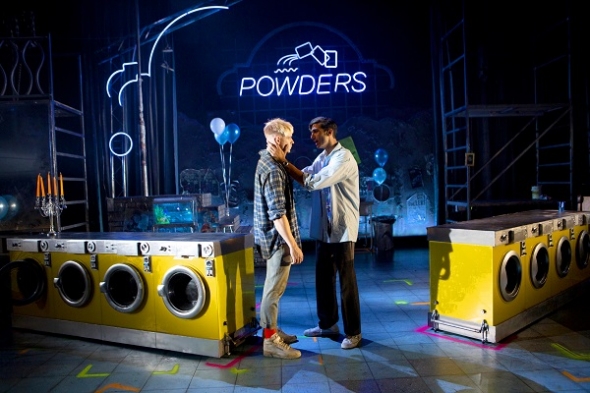 He started in the theatre but has more recently written essays, think pieces, novels and screenplays…

ONE OF BRITAIN’S most successful writers told www.asianculturevulture.com he is keen to write new work for the stage since the successful theatre adaptation of his iconic film, ‘My Beautiful Laundrette’.

The play, adapted by Hanif Kureishi himself from his path-breaking 1985 film, ‘My Beautiful Laundrette’ (‘MBL‘) has been on a national tour since it premiered at The Curve in Leicester just a month ago.

It is currently at Leeds Playhouse and then goes to Coventry and ends its current run at Birmingham Rep on November 9, having also been in Cheltenham earlier this month.

“I haven’t thought about the stage for a long time,” Kureishi told www.asianculturevulture.com . “I’ve been doing other things a new book (of mine) has come out, ‘What Happened?’ I wanted to call it ‘What F***ing Happened?’ – but the publishers wouldn’t let me. It’s a collection of essays and bits and pieces and I’ve most been working on stuff like that over the last few years but I’d like to go back to the stage.”

Adapting the film to the stage – essentially a love story between two working class boys – one white and a bit wayward, the other of Pakistani heritage and entrepreneurial, had its challenges, Kureishi admitted.

“It was a bit funny I have to say, I was 28 when I wrote it and now I’m about 200 years old,” he chuckled. “But once I got going, it was really fun to do. I really enjoyed going back to the characters and enjoyed putting some new jokes in – it was a lot of fun to go back to in the end.”

Taking about adapting it from his film to the stage, he revealed: “It would be too short (as a play) so I had to develop it – the film moves very quickly, in the theatre you just can’t keep the same set and the sequences have to be longer and there is more detail.

“I was a bit nervous about doing it, I am not the same person as I was in my 20s but the audience reaction has been very strong – people are really enjoying it, and there have been standing ovations – we are living in rather right-wing times.”

The themes of ‘My Beautiful Laundrette’ remain pertinent and powerful – and many young people have found resonances in a story which hasn’t dated. Older people will also recognise the 1980s as a similar time of social strife and striking divides in society.

Kureishi reacted: “Yeah, it seems to relate to people.

“You’ve got the Birmingham school protests (about the teaching of same sex relationships in primary schools).

“This is about a gay love story, between a skinhead and a Pakistani (origin) boy and you would have thought that would not be controversial any more – but people are still making a fuss about it.”

Kureishi’s acute social observation remains telling and it is sometimes easy to overlook the huge impact the film had on British culture more generally.

It was the first time back then, in many ways that a mainstream (media) recognised – perhaps even accepted – that working-class Asians could fall outside assumed stereotypes.

Kureishi also believes the play deals with beliefs and ideas that have been growing and gaining more traction in recent times.

“It’s also to do with my own growing up in South London – you had skinheads (which was often a sort of uniform for those who supported the National Front, a virulently anti-immigration party which believed Britain should only be white and that repatriation of non-whites was necessary) and these were kids who were racist and my background in racism had taken over my life from a young age.

“The skinheads were neo-fascists, and they seem more relevant today than they were back then – when they were more of a minority view.

“It’s more widespread throughout Europe. Of course it (its form) has changed in new ways – you have the rise of populism in Europe.

“Things have got worse and it’s really worth seeing these issues on stage.”

The film helped to launch the career of three-time Oscar winner Daniel Day Lewis – and played by Jonny Fines now – while Gordon Warnecke who reprised the central role of ‘Omar’ (essayed by Omar Malik on stage) in the film returns as Omar’s father in this stage version.

He’s also delighted that one of the most popular bands of that time – The Pet Shop Boys have produced original new music for the play.

“I knew Neil Tennant only a little, and his partner (Chris Lowe) have been really fantastic and sweet over it,” Kureishi disclosed.

He said he wants people to realise they are in a fight – a battle of ideas and values, essentially.

“It’s really important that (‘My Beautiful Laundrette’) is part of a debate.

“This is not just a good night out in the theatre – which it is, but also a political piece about things that really matter to us – race, sexuality, love and communities.”

Kureishi has enjoyed a long and varied career which started as a playwright at the Royal Court Theatre – his first major play ‘Borderlines‘ deals with anger and activism in Southall in 1980s at a time of increasing racial tension. His first novel, ‘The Buddha of Suburbia’ (1990), remains almost essential reading and has been hailed by contemporary literary icons such as Zadie Smith (‘White Teeth’) and was turned into a controversial mini-TV series and he has 15 credits as a writer of films, including several major feature films. He was awarded a CBE in 2008.

Privacy & Cookies: This site uses cookies. By continuing to use this website, you agree to their use.
To find out more, including how to control cookies, see here: Cookie Policy
← ‘Blinded by the light’ – new Gurinder Chadha film has its world premiere this evening at the Sundance Film Festival…
Sundance Film Festival opening – that Robert Redford moment, as the films move centre stage →