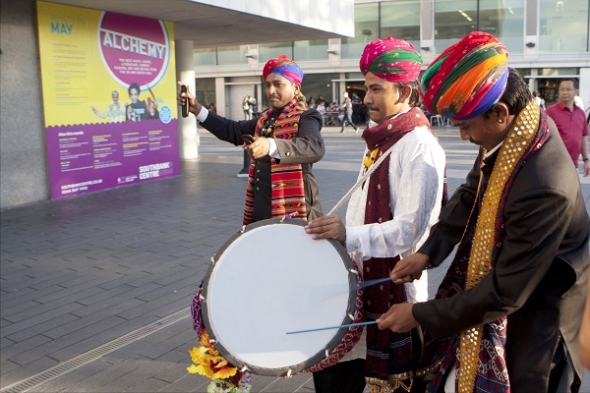 The Southbank Centre confirmed today to acv that there will be no Alchemy in 2019.

A spokesperson for the Southbank Centre told acv that with the departure of Jude Kelly, its artistic director, in May last year and Rachel Harris, Alchemy’s main producer, in October and the arrival of new director Madani Younis in December, a decision was taken to pull Alchemy in 2019.

“Jude Kelly left her role as artistic director in May 2018 to head-up the WOW (Women of the World) Foundation and Rachel Harris left in October 2018 to take up a new role at University College London.

“Since then we have been taking the time to review our programme and give our new creative director the space to develop his programme vision.

“The decision not to present Alchemy in 2019 was taken before he joined the Southbank Centre,” explained the spokesperson.

ACV covered the festival last year and knew in June planning had already begun into marking 10 years of Alchemy – but the Southbank Centre until today had said nothing publicly about the status of Alchemy.

Mawaan Rizwan, performer, comedian and broadcaster, screened his ‘How Gay is Pakistan?’ film, compered a comedy night showcasing new talent, and performed his own cabaret show at Alchemy in 2016.

He told acv: “I didn’t even know a place like the Southbank Centre existed when I was growing up, festivals like Alchemy are important in that way, they bring in people who might not know or normally go to places such as the Southbank. It’s a way of making places accessible.”

He also felt in an ideal world such South Asian specific festivals would not be necessary, but in the real world it mattered to many grassroots artists looking to get to the next level.

“In an ideal world we’d be included more in (mainstream) festivals, but you need festivals like Alchemy, so that artists (from a South Asian background) can be seen.

“I had a brilliant time at Alchemy, it allowed me to grow and work and develop,” Rizwan told acv.

The Southbank stressed to acv that the end of Alchemy did not mean the end of South Asian inspired programming and events at one of the country’s most prominent cultural hubs.

It recently appointed sitar maestro Anoushka Shankar as a Southbank Centre associate artist – meaning she will play concerts there.

“The Southbank Centre has a number of confirmed events featuring high-calibre South Asian artists in its forthcoming programme, including the recently announced series of classical music concerts and a brand new exhibition celebrating Ravi Shankar’s music and legacy.

“We also have some very exciting shows and events that are yet to be announced that we’ve no doubt our Alchemy audiences will be excited by,” emphasised the spokesperson.

Created in 2010, the festival has grown every year and has seen a wide-range of both British home-produced artists and high-profile acts come from India and Pakistan to perform at the festival, which is usually hosted at the centre for five days in May, every year.

The festival was popular and grew audiences for both established artists and those new voices coming up – stand-up Tez Ilyas is now a TV star on the BBC Three comedy series ‘Man Like Mobeen’ and last year presented a show called ‘Teztify’ at the festival and was a fest favourite, appearing more than once.

In 2016, there were emotional scenes when Pakistani rockers Laal played alongside the seminal Asian Dub Foundation in the main Royal Festival Hall.