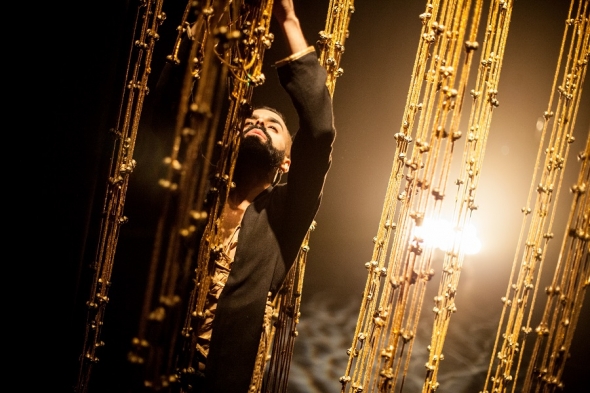 Dancer now renowned for a new piece #JeSuis as a choreographer, returns to refurbished Purcell Room (in the Queen Elizabeth Hall) for two different and contrasting performances each with a different collaborator…

NOW REGARDED as one of the foremost dancers and choreographers from Britain on the international stage, there’s a chance to see Aakash Odedra as a solo dancer in a special double bill on Friday (May 4) as part of Alchemy.

The four-day festival, now in its ninth year, showcases some of the best and emerging South Asian creative talent working in Britain today.

Among the other highlights are Mercury Prize-winning tabla player Talvin Singh, in a special closing concert on the Bank Holiday Monday, marking his 20 years since winning; the much acclaimed Akademi First World War dance epic, ‘The Troth’ which www.asianculturevulture.com saw in its stunning world premiere at the Jaipur Literature Festival in January; comedy favourite Tez Illyas and up and coming singer-songwriter Luke Sital Singh.

There is also the spectacular ‘Spirit of India’, where 200 dancers take to the stage to celebrate traditions from ancient times to the Bollywood hip-shaking antics of today.

Odedra’s double-bill ‘Echoes’ and I imagine’ presented as one will raise the curtain on Alchemy on Friday evening.

While neither are new pieces – both presented – as one, are inspired by themes that remain high on the public conscience.

In the aftermath of the terrible Windrush generation citizenship scandal, both dance pieces look at a sense of history, time and place and ‘I imagine’ is very explicitly about migration and attitudes towards race and belonging.

Both are also collaborations and the three artists behind this double-bill spoke to www.asianculturevulture.com about how the two separate works emerged and what inspired Aditi Mangaldas and Sabrina Mahfouz to work with Odedra.

‘Echoes’ is choreographed by the iconic Mangaldas. One of India’s great Kathak exports, she was one the highlights of the inaugural Darbar at Sadler’s Wells last year and continues to pack out theatres around the world.

Hers is very special collaboration with Odedra who trained initially in Kathak (the predominant dance tradition of northern India), but went onto also learn bharatanatyam (the predominant tradition of South India and quite different in movements and expressions) and also studied more contemporary western forms of dance too.

‘Echoes’ is principally inspired by Odedra’s grandmother with whom he had a close and powerful connection and even feels today, despite her passing.

‘I imagine’ is a work which has spoken word, provided by the talent that is Sabrina Mahfouz. The poet, who has a huge following, first met Odedra as part of Sky Arts Futures Fund in 2013 and found their concerns and passions coincided.

Odedra told acv: “These are two opposing ends of my personality – one part (‘Echoes’) is deeply rooted in being Indian, and there is another part (‘I Imagine’) which is about being deeply rooted here as well.”

That is essentially why the two pieces are together and performed back to back (with a likely interval), he explained.

“‘Echoes’ appeals to something genetic, ancestral and the other parts refers to something more present and of now – such as immigration. Most of my pieces always have two opposites.”

Both he and Mangaldas spent time composing and rehearsing it before it premiering ‘Echoes’ in Britain in 2015.

Mangaldas told www.asianculturevulture.com on the phone from India: “Aakash is a wonderful mover and he has a fabulous facility with his body – he can actually move the space around him.

“It was a very satisfying and interesting experience.”

They spent time talking about his grandmother whose memory has featured in another work, ‘Inked’ which is about the tattoos she had on her body as part of a Gujarati ethnic group.

“We started by talking about his grandmother and resonances from the past and his past and his ancestors. He also sent me photographs of Ghungroos (the ankle bells classical Indian dancers wear) and there is a certain ritual associated with them.”

But there needs to be change and understanding for the art form to stay alive and relevant and not consigned to a museum or nostalgia.

“If you don’t live the ritual, it is dead. So, it is about the resonances of the bells, echoes that resonate today – how do we mould our lives, how can this resonance from the past, resonate within us now,” Mangaldas added.

There are classical Hindustani vocals by the well-known artist Shubha Mudgal (another Darbar favourite) to accompany.

In ‘I imagine’ the setting is familiarly contemporary and charts the arrival of a migrant. Odedra uses masks to evoke three different characters and their responses to the environment around them.

Mahfouz takes up the experience of working with Odedra: “Our areas of interest crossed over so much and yet we approached them from completely different angles. I saw footage of his work and was in complete awe.”

She said working with him was “energising” and “illuminating” and showed that dance could be a powerful medium of (social and political) communication.

“I learnt that dance can explore serious issues and does not need to lack comedy. I also learnt that so much can be said in one gesture which can eliminate the need for words in a particular moment of a story,” she reflected in an email Q&A. “His drive comes from exploring migration, what that can mean in multiple ways and what it means for the identities of the people who have migrated. Thematically, we wanted to tell some of the personal stories behind migration from inter-generational perspectives, looking at journeys in general.”

Odedra was hugely impressed when he first heard Mahfouz and meeting her proved a powerful catalyst.

“I really wanted to collaborate with this artist who really believed in what she was doing, it was inspirational,” he revealed.

Odedra is very clear that ‘I imagine’ is set in present-time and controversially looks at those migrants who turn their backs on others like them.

“We have an immigrant who becomes racist himself. I hear a lot of comments (from some Asians) about people from Eastern Europe, and they say: ‘Other people are coming here to take our jobs’. This is crazy, but it is their way of integrating into the world.”

He said at the other end of the spectrum, there are those who become indifferent to suffering and don’t bother themselves with the plight of others in difficulties.

Mimicking a somewhat frivolous person, Odedra said this to us in a distinctly whimsical way: ‘I just want to do my make-up and go out’.

Preti Taneja reads from her debut novel, ‘We That Are Young’. You can hear Taneja at the literary event on Saturday

“Behind the make-up there’s actually a broken person. There’s also an older generation that wants to go back (home) and reminisces and lives in the past and say they want to go back to a place where the rain has a real purpose and then there are others – a third generation perhaps – that is completely clueless and are not bothered.”

‘Echoes’ is around 37 minutes, while ‘I imagine’ 47 minutes – it must be an intense and physically challenging double bill, we posed.

“It is superbly challenging as a solo dancer and there’s a lot of theatricality involved but sometimes you don’t put yourself on stage to be comfortable, you do these things to convey a message and what you believe in and share the world beyond what people see in front of them.”

Alchemy:https://www.southbankcentre.co.uk/whats-on/festivals-series/alchemy
Highlights only, please check above link for FULL programme.