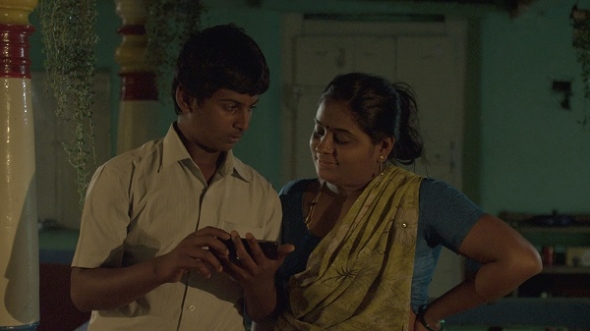 Independent cinema in India continues to make strides, and regional cinema away from the blockbusters, is also making an undoubted impact as acv catches up with rising talent Ere Gowda who also had a hand in another very successful recent independent regional production…

A FILMMAKER whose life started out tending to buffalo in his South Indian village is presenting his European award-winning feature at the East End Film Festival in London tomorrow.

Ere Gowda won’t be present at the screening tomorrow (Sunday, 4pm) but his first feature film as a director – ‘Balekempa/The bangle seller’ will be shown at the Curzon Aldgate East and it will be a UK premiere.
‘Balekempa’ won the FIPRESCI Award (given by a body representing European film critics) at the International Film Festival of Rotterdam earlier this year.
Gowda’s film appears in the discovery section of the East End Film Festival, which continues until April 29.
In Rotterdam, ‘Balekempa’ featured in the bright future section. Gowda was also the scriptwriter behind ‘Thithi’ (2016) which won a clutch of international awards – but has never been publicly screened in the UK – to our knowledge.
Gowda began his adult working life as a security guard in Mysuru (Mysore) and then started to learn about filmmaking at Dwarka, a non profit organisation where he became videographer and archiver. This led him to meeting Raam Reddy, the co-writer and director behind ‘Thithi’, which continues to crop up on best India independent film lists.
Using mostly non-professional actors (just as in ‘Thithi’) and minimal direction, Gowda explores South Indian village life through a cast of compelling and engimatic characters and centres much of the film’s narrative around Kempana, the bangle seller of the title. He for his for his part spends his working life selling bangles and other beauty products to villagers, while his wife is somewhat put out by not being able to conceive. A neighbour’s teenage son befriends Kempana’s wife and there is talk and speculation…
We caught up with Gowda for a short email Q&A as he was in India and he had some assistance from a translator too – about his film and his prestigious accolade in Rotterdam.

www.asianculturevulture.com (acv): What made you want to make this film?

Ere Gowda (EG): It’s been inspired by the people I have interacted with and the interesting lives they lead.
‘Balekempa’ has been filmed in and around the villages where I grew up (rural Karnataka).The people acting in the film are people I know, personally. They are my relatives, my friends, or friends of relatives. The characters in my film, likewise, are drawn from what is around me, from what I remember as a child and from what I imagine as an adult.
All these elements have contributed to the creation of the story. However, I strongly believe that a character is not just something that exists in my head. A character is a question wanting to be answered and this happens when they become real, in the script and then on screen. I cannot say that I know the characters of my film entirely. But I can certainly say that I want to know them. And my entire process of writing, directing and crafting is a sincere effort to get to know the people I describe. And it is precisely this process of getting to know people that I want to share with the audience.

ACV: What was it like winning the FIRPRESCI in Rotterdam?

EG: While grazing buffalo in my village as a child I’d watch trains to the state capital Bengalaru (Bangalore) pass by and I never imagined that I would even visit the city. From there, to travelling to Rotterdam and receiving an award on such a big stage has been an exhilarating experience. An independent film is a journey with an entire team and the award has been a cause of celebration for our work on this journey. I hope it’s just the beginning of something special for all of us.

ACV: How easy or difficult is it to be working outside the mainstream (even in regional language Indian cinema, many regions are dominated by big production houses and a star system)?

EG: A lot of independent films are coming out and are travelling around the world. These films are not only keeping audiences spellbound but are a medium to showcase local stories and culture. They are receiving appreciation from a varied crowd, at home and internationally. So yes, I think it’s on an upward trend.

Privacy & Cookies: This site uses cookies. By continuing to use this website, you agree to their use.
To find out more, including how to control cookies, see here: Cookie Policy
← ‘No fathers in Kashmir’ – Oscar nominated director Ashvin Kumar talks of connecting young people as troubled release comes to the UK…
CHANGEMAKERS – Shobana Jeyasingh CBE, choreographer: “Like many Asians in the UK I am a cultural hybrid”… →