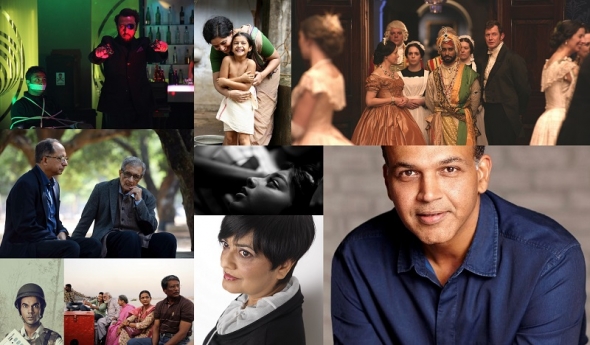 A week-long indulgence of film, talks and events focusing on South Asian cinema…

The director of ‘Lagaan’ will be in conversation at the British Film Institute on the Southbank as part of the festival and it all gets under way with a premiere of ‘The Black Prince’ which tells the story of the last and doomed Maharajah of Punjab.

Music star and poet-lyricist Satinder Sartaaj stars and is expected to be joined for the opening at the BFI Southbank by other leading members of the cast, including Indian icon Shabana Azmi and Jason Flemyng of ‘Lock, Stock and Two Smoking Barrels’ fame.

Sartaaj, who walked the Red Carpet at Cannes as a guest, and spoke to us when he was there about the film, makes his much-anticipated big screen debut. (See the link below or here)

Another of the highlights will be much feted director Adoor Gopalakrishnan returning to LIFF with his latest film, ‘Pinneyum’ (‘Once Again’).

The festival closes next Thursday (June 29) with ‘Sexy Durga‘ a film set in Kerala, Southern India, where a young girl from the North befriends a local and they end up on a crazy, comic road trip that sees them have to dodge gangsters along the way.

LIFF also has a Birmingham edition, it runs from Friday (June 29) to next Sunday (July 2) and opens and closes with the same films as in London.

* Ashutosh Gowariker in conversation – one of India’s most versatile and imaginative auteurs makes a rare foray to London without a film. We spoke to him last year ahead of his release of ‘Mohenjo Daro’ with star Hrithik Roshan in attendance. Though sumptuous-looking and aided by the skilled ear of music composer AR Rahman, the film failed to catch fire at the box office. Gowariker, a Marathi-language (his mother tongue) actor enjoyed much success with the Priyanka Chopra produced ‘Ventilator’, which won national awards. A sharp and intelligent observer of global cinema in all its currents – he is a member of the Academy – he will no doubt cast a critical and discerning eye over the latest trends in Indian and global cinema and perhaps discuss work to come…

* ‘Newton’ – Director Amit Masurkar returns to LIFF with his latest film which we previewed when it came to Berlin earlier this year. Starring one of India’s best known and upcoming indie talents, Rajkummar Rao (memorable as the reporter figure in ‘Aligarh’), this is a black comedy which sees a lowly clerk’s diplomatic skills tested to the full as an election takes place in the turbulent state of Chhattisgarh – with the Maoists on one side and the local police on the other working to agendas that don’t exactly scream democracy…
WHERE: BFI Southbank, Belvedere Road, South Bank, London SE1 8XT
WHEN: Saturday (June 24) 6.10pm
Ticket/info: Here
AND
WHERE: Cineworld Wembley, Park Lane, London HA9 0FD
WHEN: Sunday, (June 25) 5pm
Tickets/info: https://www.cineworld.co.uk/films/liff-newton-hindi

*‘Badman’ – One of the Bollywood’s eponymous figures – Gulshan Grover stars in this mockumentary – with Grover attempting to (re)-launch himself in Bollywood as the good guy and hero. With appearances from a host of stars, including Rishi Kapoor, Manisha Koirala, Farah Khan and Chunky Pandey – the serious Bollywood aficionado has to see this film which comes to England for the first time. Grover will be in London to introduce and talk about it. This genre of filmmaking has not really been done in an Indian context – can Grover pull of the Indian ‘Spinal Tap’? The film enjoys four screenings in London.
‘Badman’ – Cineworld Wembley, 6pm Saturday (June 24); Cineworld Leicester Square, 3pm Sunday (June 25); Stratford Picturehouse 6.30pm Tuesday (June 27)

*‘Pinneyum’ – One of only two directors to win the prestigious Sutherland Award at the London Film Festival (the other is Satyajit Ray), Adoor Gopalakrishnan’s films are deeply rooted in the culture and mores of the state of Kerala. Best known for its stunning inland waterways and fine beaches, the first region ever to democratically vote for a Marxist government (1954), Gopalakrishnan gets under its skin to examine universal truths and a shared humanity. Finely moral, in ‘Pinneyum’ (in Malayalam), Gopalakrishnan charts the fate of unemployed Purushothaman (Dileep) who after marriage to hardworking teacher Devi, hatches a plan that involves deceit and fraud…
WHERE: BFI Southbank
WHEN: Sunday, June 25, 4pm
Tickets/Info: HERE
AND
WHERE: Cineworld Wandsworth, Southside Shopping Centre, Wandsworth High Street, London SW18 4TF
WHEN: Tuesday, June 27, 7pm.
Tickets/Info: https://www.cineworld.co.uk/films/liff-once-again-pinneyum-malayalam

*‘A Billion Colour Story’ – first seen at the London Film Festival last year, this makes a very welcome return to London. Hari is the product of a mixed religious relationship – his father is Muslim, his mother Hindu. It doesn’t really seem to matter until the struggling filmmakers – trying to get their first film off the ground – need to find new accommodation and a more frugal lifestyle, it’s then they realise India is changing…and religion and politics are unavoidable. Young Hari has a plan to help his parents achieve their dream…
WHERE: Crouchend Picture House, 165 Tottenham Ln, London N8 9BY
WHEN: Monday, June 26 6.30pm
Tickets/info: https://www.picturehouses.com/cinema/Crouch_End_Picturehouse/film/liff-2017-a-billion-colour-story
WHERE: Cineworld Leicester Square, 5-6 Leicester Square, London WC2H 7NA
WHEN: Wednesday, June 28, 6.30pm
Tickets/info: https://www.cineworld.co.uk/films/liff-a-billion-colour-story-hindi-urdu
Cineworld Leicester Square 6.30pm, Wednesday, June 28.

*‘The Argumentative Indian’ – Amartya Sen is not just a Nobel Laureate, he is the very conscience of liberal India. The economics professor is one of the world’s foremost public intellectuals and his book of the same title remains one of the most compelling and stimulating histories of Indian thought and practice. This is a film where he talks to Cornell economics professor Kaushik Basu and students. There are also contributions from other major figures, including former Indian prime minister and respected economist Manmohan Singh.
London School of Economics, Houghton St, London WC2A 2AE – 6.30pm, Tuesday, June 27. Tickets/info: http://eshop.lse.ac.uk/product-catalogue/institute-of-global-affairs/film-screening-the-argumentative-indian

*‘Mukhti Bhawan’ (‘Hotel Salvation’) – Director Subhashish Bhutiani is one of the rising stars of the Indian indie sector and this film won an award at Venice and has been much admired for the way it mixes humour, philosophy and reflectiveness together in a film that has standout performances from the renowned Adil Hussain (‘Life of Pi’) and Lalit Behl (‘Titli’). The latter plays a 77-year-old man intent on dying in the Hindu holy city of Varanasi, but his son played by Hussain is not so sure and wants to coax him back home. The film has been acquired by the BFI and will be released more widely in the UK in August.
WHERE: BFI Southbank
WHEN: Tuesday, June 27 8.30pm
Tickets/info: Here
AND
WHERE: Picturehouse Central, corner of Shaftesbury Avenue and Great Windmill Street, Piccadilly, London W1D 7DH
WHEN: Wednesday, June 28 6.30pm
Tickets/Info: https://www.picturehouses.com/cinema/Picturehouse_Central/film/liff-2017-hotel-salvation

Shakti and the early works of Pratibha Parmar – anyone involved in the struggle for LGBTQ+ rights from the 1980s will know of Shakti – a pioneering organisation which helped to put the Asian gay experience on the map. There will be clips from the films of Professor Pratibha Parmar who documented so much of the work tackling prejudice and finding a safe space for the LGBTQ+ community in Britain. There will be a panel discussion with Pratibha Parmar, Poulomi Desai (co-founder of Shakti), Kim Mulji and Cary Rajinder Sawhney (director of the London Indian Film Festival).
WHERE: BFI Southbank
WHEN: Sunday, June 25 7pm
Tickets/infoo: Here

* British Asian filmmakers and artists on the edge of Brexit…
What does the future hold once we have left the European Union? Will European funding cease too? And what impact, if any, will it have on the diversity debate…the BFI’s CEO Amanda Nevill, Pratibha Parmar,, Harriet Finney (Deputy CEO, Creative Industries Federation) and Deborah Sathe (Cinestaan Film Company) are on the panel.
WHERE: Blue Room, BFI Southbank
WHEN: Monday, June 26 6.45pm-8.15pm
Tickets/Info: Here

For all tickets/more info and the full programme, visit…
http://londonindianfilmfestival.co.uk/

The most recent documentaries coming out of India and Pakistan http://asianculturevulture.com/portfolios/sheffield-doc-fest-2017-love-war-skirmishes-betweenoverviewwrap/

Privacy & Cookies: This site uses cookies. By continuing to use this website, you agree to their use.
To find out more, including how to control cookies, see here: Cookie Policy
← ‘Creature’ – Beauty and horror in Akram Khan’s latest English Ballet collaboration…
Poets Kobi Nazrul Islam and TS Eliot – arts group celebrate centenary epics by two literary titans and join the dots of cultural inspiration… →