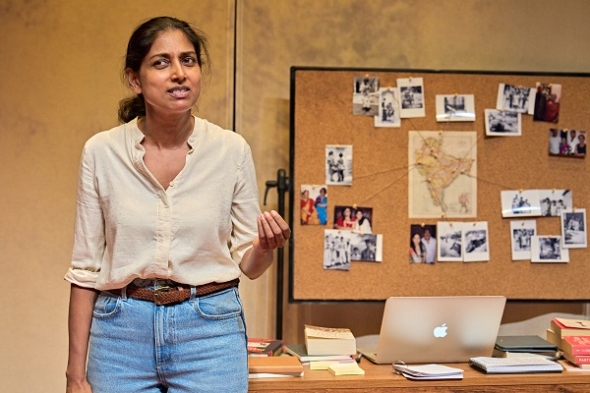 TO MARK the 75th anniversary of the Partition of India, artistic director of Tara Theatre, Abdul Shayek, presents heartfelt witness accounts of the people who lived through the partition and hold up a mirror to Britain’s inglorious imperial past.

‘Silence’ is an adaptation of broadcaster and author Kavita Puri’s book, ‘Partition Voices: Untold British Stories’ which itself was drawn from her documentary series, ‘Partition Voices’ broadcast five years ago at the 70th anniversary of Partition. (See links below for more on this).

The dramatisation is written by four writers, Sonali Bhattacharyya, Gurpreet Kaur Bhatti, Ishy Din and Alexandra Wood, who weave together these experiences into one whole structure.

Din has written the wrap around story of Mina, (played by Nimmi Harasgama) a journalist pitching a story about Partition to a national newspaper, as its sceptical and slightly stuffy editorial team try and comprehend the magnitude of one of 20th century’s most explosive events.

She tries to explain it by getting them to imagine if the United Kingdom was split into two parts – one being the island we inhabit and Scotland being in the Czech Republic (which is what happened when Pakistan was created in 1947, with East Pakistan being one region that later became Bangladesh – and West Pakistan being the rest).

Mina (an obvious representation of Puri) is also nursing her ailing and diabetic father, played with solemnity by Bhasker Patel.

All this is fictional but it serves to anchor the accounts of human survivors who experienced the fall out of big political decisions.

Sometimes told and sometimes acted, this approach illuminates an aspect of our shared colonial narrative, which is not much known but one that created violent upheaval for over 15 million people and the legacy of which is still felt in the streets of Britain today.

Designed by Rose Revitt, these stories are simply presented on a bare stage with a backdrop of drapes, on which are projected images that range from abstracts to archive photos.

Empty Shoes, criss-cross lines and a chalk drawn rail track on stage convey the rapid movement, memories and transition, while the lighting design by Ciarán Cunningham and a sometimes pensive, sometimes pulsating sound design composed by Elena Peňa, gives us a sense of fear, bewilderment and turmoil experienced by all the population. (Spoiler alert but do look out for the Union Flag which is also projected on the stage at the end through light and shadow).

Woven together with humour and pathos, the seven strong ensemble cast of ‘Silence’ share stories of horrific violence which are so visual – such as that of a young Sikh boy who is hugged by his father, as he raises a sword to his daughter, while she moves her plait to make it easier for him to strike the blow and dispense with her life, lest she falls in enemy hands.

Other harrowing stories of how “the female body became a battlefield or property to be bought over or exchanged” is beautifully illustrated when Chotu (Rehan Sheikh) tries to translate his mother Noor’s story (played by Renu Brindle) about resistance and he is overcome because this generation has never shared such atrocities and the universal silence has created trauma down the generations.

Brindle makes for a very tolerant wife in the Sindhi love story segement humorously depicted by Patel remembering his lost love from another faith, whom he used to serenade on the rooftops in Karachi.

The play moves quickly from story to story and there are many moving moments such as when the young Scotsman (Martin Turner) who was sung to by his ayah, or the old Sikh guy (finely played here by Sheikh) who was saved by Muslims and the young woman (Sujaya Dasgupta) looking for her grandfather and learns he was an aide-de-camp to Lord Mountbatten, the Viceroy of India.

The finale brings us back to today, where an Indian/Pakistani heritage couple (Dasgupta and Jay Saighal) realise there are more similarities between them then what divides them.
‘Silence’ is moving and illuminating testimonial theatre beautifully performed.
ACV rating: ***** (Five out of five).