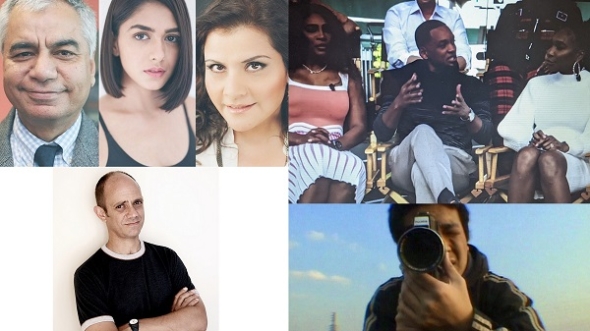 THERE was more than a hint of star power when Will Smith was joined by the Williams sisters to talk about the film, ‘King Richard’ which goes on release from November 19 in the UK.
It is the biopic of Richard Williams who trained his daughters to incredible tennis success. Smith plays Richard and the film screened at London Film Festival (October 6-17) recently. The supporting cast are brilliant especially Oracene (Aunjanue Ellis, Williams’ mother) and the two young actors Sanniya Sidney, who plays Venus and Demi Singleton who reprises Serena. Both had to learn to play tennis and Demi with her ‘wrong’ hand.
While the content of the press conference on Sunday (November 7) was mostly predictable and unremarkable by media standards – what was more unsettling and disturbing was the comments off court – Smith et al were seated on an actual tennis court – though the location was not disclosed other than it being in LA and at midday.
It appeared as though there were some non-journalists in the non-visible part of the Zoom room and one remarked “how well spoken and educated the Williams sisters came across” in the text chat function.
Ex-cccuse me!
That response sparked a flurry calling out the person who made the remark. She backtracked and said no offence was meant. The text feed was cut and everyone went back to listening to Smith, or the Williams sisters or other members of the production.
Unconscious bias is everywhere and should be called out – even if the person meant no offence. Often those who make such comments can’t see their bias the first place – which is where the problem is. A video of the visible press conference should be out shortly, say Warner Brothers.
More on the film nearer the time of the release.

MENTAL HEALTH is a big topic and rightly so and responding to the challenges is the UK Asian Film Festival (UKAFF).
It launches a report tomorrow (November 10), ‘Mental Health of South Asian Artists – Reimagining the Arts for Good Mental Health’, at City Hall in London, with the support of Justine Simmons, the deputy mayor for culture.
Recent ‘Strictly Coming Dancing’ contestant and actor Nina Wadia will also lend her support to the campaign.
Also present for the launch will be Bollywood star Banita Sandhu who appears in the current Amazon Prime release, ‘Sardar Udham’. She is the love interest alongside Bollywood star Vicky Kaushal who plays the lead of historical figure Udham Singh, who ahot a British official in London in 1940 in revenge for the terrible Jallianwala Bagh massacre of 1919. (We caught up with Kaushal recently to talk about his role in the film.)
Sandhu retreated from the scene following her previous film in 2018 and says the pressures of making her debut alongside another Bollywood star Varun Dhawan in the film, ‘October’ had an impact on her mental health. She was finishing her degree at the time.
The launch of the report will be supported by among others, Professor Dinesh Bhugra, a patron of UKAFF and author of ‘Mad Tales from Bollywood sharing how mental illness is portrayed in Hindi cinema’.
This is not a public event and is by invitation only. You can contact UKAFF if you want to attend.
UKAFF continues to run a confidential helpline for artists who may want mental health support, dubbed Talking Therapy – you can call 07930491915.

Cinema of the Self weekend screenings

CURATED by one of our own contributors Sunil Chauhan is a weekend of unusual documentaries, themed around the Cinema of the Self.
In the 1970s, some Japanese directors turned the camera on themselves or those closest around them.
The results were very personal, raw, and present powerful snapshots of their lives at the time – and totally without the artifice that comes from even real life documentaries.
As the blurb from the cinema hosting the five films – which will screen this Saturday (November 13) and Sunday – (November 14) at the Close-Up Film Centre in east London (E1), says: “So, while beauty, humour, lightness of the everyday are present, above all, it’s the private moments that give these films their power to surprise and move. This programme brings together some of the best of the sub-genre to come from Japan in the last 25 years.”
For more details, please see: https://www.closeupfilmcentre.com/film_programmes/2021/cinema-of-the-self/

From EM Forster & ‘Arctic Summer’ and India to the Booker Prize..

FINALLY, and unrelated to cinema is our very own personal congratulations and special shout-out to writer Damon Galgut.
On November 3 (last Wednesday) he was announced as the winner of this year’s Booker Prize for his novel, ‘The Promise’. In this novel, set in the author’s native South Africa, a black housekeeper is promised the property she works in by the white family who own it – as one of them nears death. The promise is never kept and is the starting point for an exploration of family, apartheid and the nature of time.
Book lovers and those who follow authors very closely (Galgut has been nominated twice previously for the Booker) may remember he spoke to www.asianculturevulture.com about 2014 novel, ‘Arctic Sumer’. At the time he was one of the star authors about to appear at the Edinburgh International Book Festival.
It’s a novel that takes off from the great early 20th century novelist EM Forster and his 1924 ‘A Passage to India’.
Galgut imagines Forster working out who he is – after falling in love with an Indian man possibly, at a time when homosexual relations were taboo and illegal.
Galgut himself has a lot of personal connections with India and credits EM Forster as the man who sent him to the country in the first place and in the acv interview about ‘Arctic Summer’, we explore Forster’s own likely views towards Independence and Indians. The piece which was piblished and done via email is here http://asianculturevulture.com/portfolios/sex-race-class-em-forster-damon-galguts-arctic-summer/