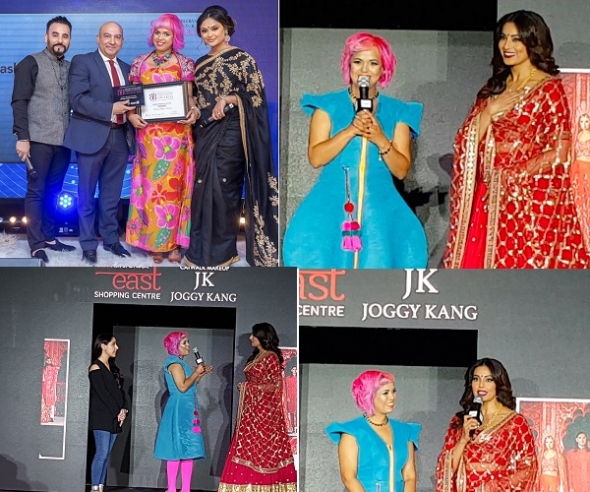 IF YOU HAVEN’T seen any of Momtaz Begum-Hossain’s interviews for acv on screen, you really should…

And if you’ve never been exposed to her opinions on colour, fashion or style in general, then…

You’re the one missing out…

She’s just won a national award and last weekend she interviewed Bollywood star Bipashu Basu at a wedding show. And very soon she will be jetting off to the Cannes Film Festival as part of acv’s team covering the biggest and most glamourous film festival of them all. More on acv at Cannes next week…

First that award – she was named Fashion Journalist of the Year at the British Bangladesh Fashion and Lifestyle Awards at a glittering dinner at the Hilton Hotel in Canary Wharf, London on April 20.

Momtaz told acv: “It’s time to put the stereotypes to bed, there’s so much more to Bangladeshis than people realise and the awards were a great way to start. It’s also such a positive message that they focus on achievements in the creative industries.”

Speaking about her win she added: “I’ve been a lifelong lover of fashion so it’s really exciting that the industry is now very much a part of my career.”

Momtaz, who also writes for Asiana Wedding Magazine and has her own
podcast (see link below), was on the Red Carpet for us at the recent
opening of the UK Asian Film Festival and posed questions for one of
Bollywood’s biggest stars in recent times, who was also chief guest of the
festival – Zeenat Aman.

Over this weekend (April 26th and 27th), Momtaz was at Allianz Park in Hendon, North London, hosting the Asiana Wedding Show weekend where she interviewed catwalk showstopper Bollywood actress Bipashu Basu on stage.

Momtaz said: “Over the years I’ve had the chance to interview some of the biggest names in Bollywood but interviewing Bipasha was special because she’s one of the rare actresses who has ‘made it’ in the industry on her own terms.

“I admire her spirit and originality and it was refreshing to hear her speak with such enthusiasm about her marriage.”

There were 21 winners in all at the British Bangladesh Fashion and
Lifestyle Awards. Members of the public could vote for people to be nominated and more than 300 names were submitted – in all some 5,000 votes were cast across the categories for the eventual winners.

Among the special winners on the night was Rahemur Rahman who debuted his first collection at London Fashion which was featured by acv.

He is the first British designer of Bangladeshi origin to showcase at
London Fashion Week Mens and was recognised for outstanding achievements within the fashion industry. You can read Momtaz’s article about Rahman’s debut here.

Fokrul Hoque, CEO of the British Bangladesh Fashion Council, said: “These awards are not just about recognising those who have succeeded
and done well in this sector, but also about highlighting and promoting
the creative industries as a career choice, as the fashion industry is a
£32 billion a year industry and one that is growing fast, with lots of
opportunities.”

Privacy & Cookies: This site uses cookies. By continuing to use this website, you agree to their use.
To find out more, including how to control cookies, see here: Cookie Policy
← Pantomime and family Christmas theatre shows – Still time to see those with more than a little colour…
ACV Bird Eye Review Show Episode 20 – interviews and reviews: Nushratt Bharuccha (‘Chorrii’), ‘Ashes on a road trip’ and Richa Chadha & Vivek Oberoi (‘Inside Edge’) →