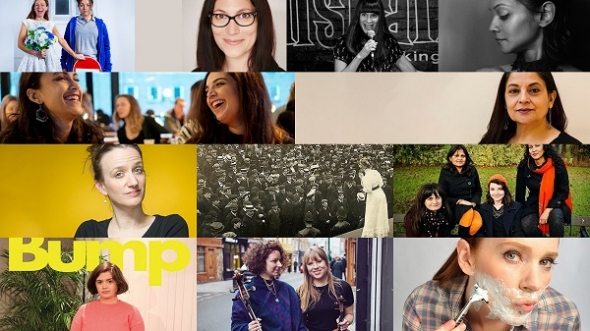 DESCRIBED as “fierce and unapologetic” is Tara Arts’ season of showcasing female artists (and interests) which continues this month (May).

Known as I’ll Say it Again and something of a continuation of the inaugural festival which celebrated the centenary of the women’s vote last year, it’s an eclectic mix of storytelling by women – some conventional, others more innovative and personal.

There’s a huge range of work covering many different aspects of life – from food to pregnancy, diversity and womanhood to skiing and dreaming… Check out the full programme below.

We’re picking out four performances that may be of special interest to asianculturevultures – and one that has come and gone but will be returning to another venue in London towards the end of this month.

The Komola Collective, a four-women theatre community interest group, revisit three major characters from the work of Rabindranath Tagore, one of South Asia’s most iconic writers and the first Asian Nobel Laureate ever. ‘Debjani’, ‘Charulata’ and ‘Nandini’ come under the spotlight and travel in time, both back and forward to show what it means to be a woman in a world still ruled by men.

South Asian Sisters Speak (SASS) began in 2016 and was founded by friends Sheetal Mistry and Shirin Shah. Focusing on South Asian writers, they created the Brown Girls’ Book Club, and now with the help of Tara, have developed a writing project that seeks to enable new voices to emerge.

The ‘Evening of Exploration’ will commence with a discussion about Meera Syal’s novel, ‘Life isn’t all Ha Ha Hee Hee’ and the discussions about identity and womanhood it sparks.

Described as a meditation on her ‘squeezed middle life’ in Wimbledon and her own and her two son’s sense of identity, she explores the notion of home and belonging – over a glass of prosecco or two and there will be an opportunity to comment and react post the monologue underscored by the idea, ‘You’re the one with the identity crisis Mum, not us’ and the show is directed by Philip Osment. There are two shows on Sunday, May 19.

There are a host of other shows to entertain and stimulate you and check the Tara website for full details.

Presenting something of an original and innovative dance performance is Vena Ramphal. Ramphal is a trained Indian classical dancer and has also studied yogic meditation and both feed into ‘The Shape of Stillness’ . The performance will be followed by a discussion about wellbeing and the arts with a group of women who are leaders in the field of dance, performance and healthy living.

Nyla Levy’s debut play, ‘Does My Bomb Look Big in This?’ was also part of the festival.

The new play (in development since 2016) has just finished a short run (April 30-May 4) and heads to Soho Theatre for a longer run later this month.

Insightful, and powerful, it charts the journey of ‘Yasmin Sheikh’, a teenager in South London who begins to see the world a bit differently to her close friend, Aisha (Halema Hussain) – and Sheikh eventually departs for Syria.

You can catch the three-woman play (there’s another white character called ‘Morgan’ played by Eleanor Williams) at Soho Theatre beginning from Tuesday, May 21 through till Saturday, June 8 – well worth catching if the journey from teenage Instagram-savvy Brit to Jihadi volunteer intrigues you.

Sudha Bhuchar: ‘Evening Conversations (You’re the one with the identity crisis Mum, not us‘) May 19, 2pm and 7pm.