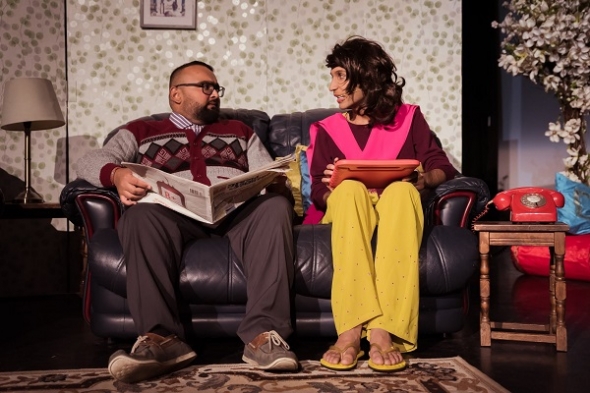 New show has proved a hit…

NOW who’s up for a big fat Asian wedding – trimmings and all this bank holiday weekend!

You are cordially invited and…uh, you have to pay to be there!
Don’t worry, it’s not the latest trend… and there are two sittings (to maximise revenue – we jest).

The popular theatre show, ‘Mrs Kapoor’s Daughter’s Wedding’ returns on Sunday (May 5) and Monday (May 6) and can be seen at Leicester Haymarket and then finally in this run on May 27 (Bank Holiday Monday) at the Alexandra Theatre in Birmingham.

It’s been quite the roller-coaster ride for writer/producer/actor Archana Kumar who conceived the show and produces it through her stage company, AK Productions.

It first played to audiences at The Beck Theatre in Hayes, London last year and returned earlier this year – its last outing was at the 1,000 plus seater at Watford Coliseum in April and all the shows have been hugely popular.

“The first show sold out in two hours,” Archana Kumar told www.asianculturevulture.com. “There is nothing out there quite like this.”

About a traditional Asian wedding, it packs a lot in – with music, dance and comedy. It also features popular Youtuber Parle Patel in the lead role of ‘Mrs Kapoor’.

One of the lead singers is Shahid Abbas Khan, who was in the hit West End musical, ‘Bend it Like Beckham’.

“It’s really quite unique – there’s a big array of different elements to a desi (Asian) wedding – and we have comedy sketches, live singing, dance, fashion and it targets the whole family – we have four-year-old children laughing their heads off with their grandparents there – that’s the feel we really wanted – a real family show.”

Kumar has a dance and choreography background and runs AK Bollywood Dance, a well-established dance school based in Harrow, London. Many of the school’s dancers appear in the show.

“We really wanted a platform we could develop and work towards – we want to open the doors for young British Asian artists to get into theatre,” added Kumar.

They have found there is an audience and an appetite for this type of entertainment – but with some 45 people involved (cast and crew), it’s no easy undertaking.

“It’s a big-scale production and for some it would be overwhelming.

“There are so many different creatives coming together – it’s a massive team backstage.

“There is a lot of work behind the scenes and it can put people off,” said Kumar, explaining why we don’t see more shows of this type when clearly there is a demand.

The show is in English and where there is Gujarati, Punjabi or Hindi, it’s translated into English.

“It’s very much aimed at a wider audience,” said Kumar, a mother of two. “And meant to be very relatable – the parents tells us their children are just like the ones in the show – always on their phones and on social media.”

Kumar had Parle Patel in mind when she wrote the character of Mrs Kapoor. Patel has a thriving Youtube channel and often performs skits about a fictional British Asian Gujarati family (where he plays all the characters).

“I knew the calibre of his work and admired what he had done – he really fell in love with the script and together we have been refining Mrs Kapoor,” explained Kumar to acv.

Patel is one of the country’s most popular South Asian Youtubers, with over 40,000 subscribers to his own channel, Planet Parle.

“I didn’t know Archana before and when they showed me the script, I thought it was very solid.

“Performing in front of a live audience didn’t feel completely new, they wrote the script with me in mind and they had seen a lot of my sketches and had left lots of extra room for me to pad out Mrs Kapoor,” explained Patel to acv.

He ad libs a lot too in the show and while he doesn’t sing, he does have a jig as Mrs Kapoor.

“You can’t have a desi wedding without dance,” Patel sniggered.

“Mrs Kapoor is like a matriarch, strong-willed and in charge, and she’s very much on a mission – but she’s also quite naïve about a lot of things.”

Hence the comedy – Patel told acv he’s been collaborating with other sketch artists and hopes to introduce them to his Youtube channel.

“I’ve been working with other artists, comedians and Youtubers – anyone from the world of sketch – even if they are not on Youtube. It’s been a one-man show but there’s lot more scope to do things when you have got others working with you.”

One of those is Darshan Varsani, who plays ‘Mr Kapoor’ in ‘Mrs Kapoor’s Daughter’s Wedding’.

“It will be UK urban and have a UK feel and flavour. Yeah, there will be some crazy videos…” he teased.

Patel has also made videos for www.asianculturevulture.com and was part of the acv team in Cannes 2016, behind the camera.

Kumar said she is working on daughter no2’s wedding but acknowledged there is still a lot of love out there for the current show.

“We will see what happens after May. There are still a lot of people in London who have not seen it and we are super excited to work on a second one…”

Privacy & Cookies: This site uses cookies. By continuing to use this website, you agree to their use.
To find out more, including how to control cookies, see here: Cookie Policy
← Anish Kapoor – Some 60 exhibits and new controversial work at Gallerie dell’ Accademia and Palazzo Manfrin in Venice
‘Three Pounds in my pocket’ – Seminal BBC radio series on South Asian migrants goes deeper and gets more personal… →